One out of three lobsters were keepers this week

But what about San Diego or Mission Bay pollutants tainting them? 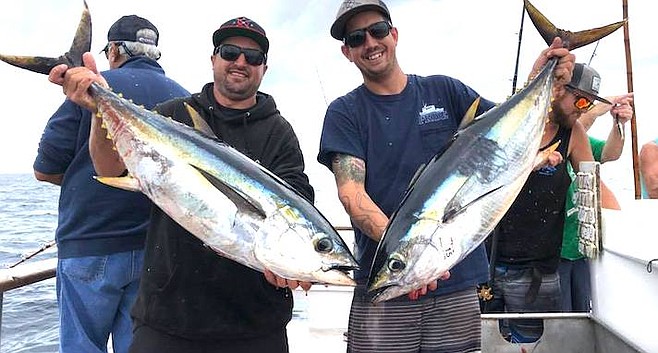 Saltwater: Lumpy water and gray weather from Rosa lowered the angler count by 1,500 from the previous week. Most that stayed home were relying on predictions that did not materialize. Yellowfin and skipjack are topping the tuna counts, but those big bluefin are coming over the rails of the boats concentrating on the southwest side of San Clemente, and a few bigeye are out there in the mix. Dorado fishing has been good around the edges of the tuna schools and on the occasional paddy floating offshore.

Yellowtail came up in the counts though there were fewer trips, and I think a good part of that is a few boats fished closer to home due to larger swells outside and south. Bonito are all over the place, from the kelp edge, piers and jetties, to offshore.

The trend is going to be about the same with the seas this week as another system, Sergio, is pushing five- to ten-foot seas up from the southwest. All models show the now northwest-bound storm to basically make a U-turn, pick up a little speed and make landfall as a tropical storm or depression along the Baja coast about mid-peninsula. As some breathed a sigh of relief about the major storm that wasn’t, I hope they take this next threat seriously.

As lobster season is now open, buggers are finding a decent size to their quarry. Often a one in ten legal-to-short ratio is the norm. This first week’s reports have been showing one out of every three caught is above the minimum size limit. I have noticed on social media that some who hoop-net or free dive along the riprap in either San Diego Bay or Mission Bay asking whether their catch is tainted by pollution.

Typically, heavy metals sink into the silt, and bays are good at cleansing with tidal flow. Fish and crustaceans have been tested from the bays and only a small amount of bottom dwellers (mostly rays and old sand bass) tested for trace amounts well below the guidelines. Spiny lobsters travel up to a half mile each night and never stay in the same daytime shelter. The bug you caught near a jetty might have just arrived from the reefs outside, and the one you caught off a reef outside might have spent a good amount of time around bay and jetty riprap.

Another note concerning lobster season is the question of bag limit: The magic number is seven. That is not only the limit to how many one can catch and possess in the ice chest while targeting California spiny lobster, it also means your fridge and freezer at home.

Fish Plants: None this week