The vexing sand mine 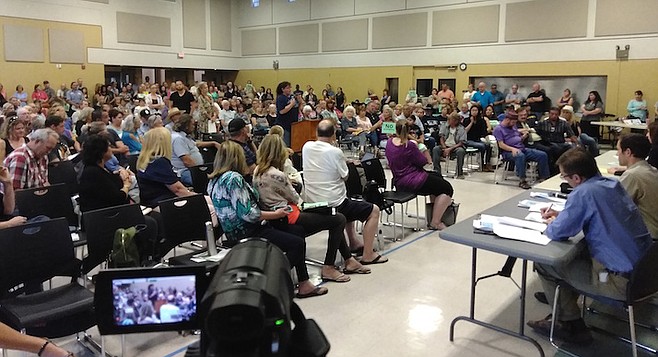 “I don’t know if you noticed, but the whole town of Lakeside is here,” said local resident Barbara Sessions, pointing to over 500 people who recently filled up a 250-seat room at the Lakeside Community Center. Sessions addressed a panel of six county employees who came out in the boonies of East County to face the residents about a sand mine project proposed in El Monte Valley. The county had to present the subsequent Environmental Impact Report and listen to public concerns. 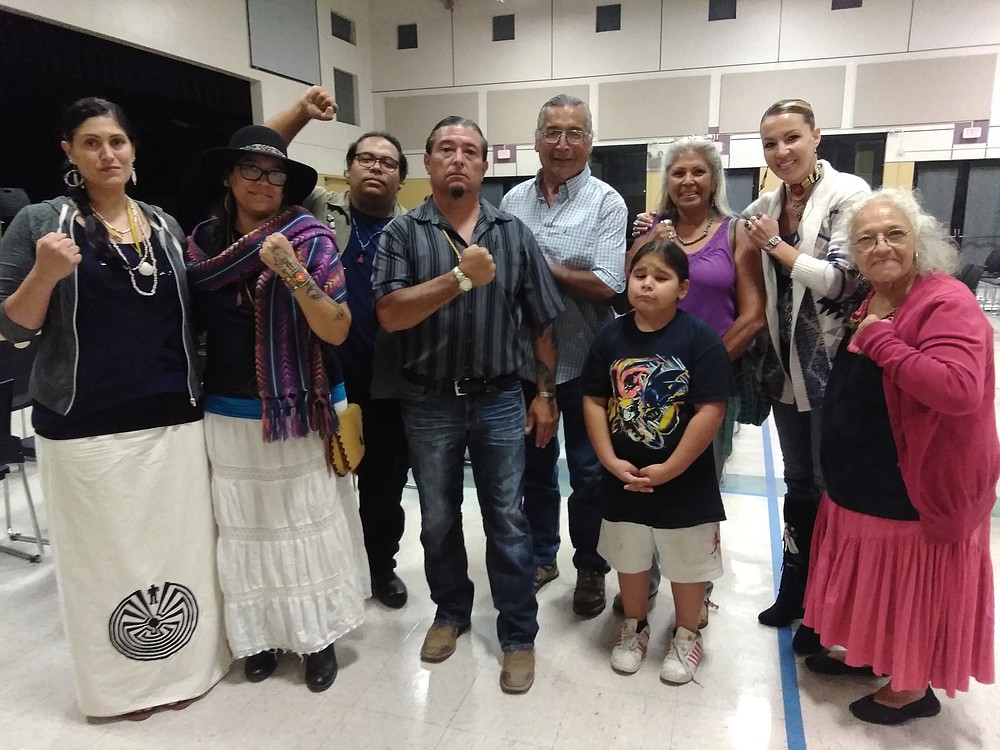 “Those bones in that valley have my DNA."

Sessions, a local resident, said she lived in Lakeside since she was six years old. “You need to stop this right now, do you understand? I don’t care how much money you guys are gonna make. You’re gonna make it on the death of our children and you’re gonna destroy our town. We are going to stand on that road and we are not going to let the trucks through. You will have to run over my body.”

The project has been plagued by conflict of interest involving a long list of public servants, private companies and non-profits: Bill Adams, one of the three partners on the sand mining company El Monte Nature Preserve; chairman of the San Diego County Planning Commission, Michael Beck, leader of two non-profit organizations specializing in land acquisition and restoration along with his former place of employment, Lakeside River Park Conservancy. Beck’s organization Endangered Habitat Conservancy was contracted by Adams' company to restore the land post-sand mining; the conservancy itself, now led by executive director Robin Rierdan, who sent out a letter claiming leadership in the community’s fight against the project and asking for $40,000 donations to sue the sand miners; county supervisor Dianne Jacob, who nominated Michael Beck to the planning commission. The commission is going to vote on the sand mining project and then Jacob and the other county supervisors.

The river bottom in the valley is the third largest aquifer in the county, home to rural and equestrian businesses and also to Van Ommering ranch, a year-around destination for school children.

Dozens of speakers ignored the two-minutes-per-person allotment and laughed about Ben Nelson’s request for “no applauses and no booing.” Nelson, project manager with the planning and development services, said, “We understand this is a highly controversial project.” The audience responded to the county’s pink and yellow paper slips holding five and 30 seconds warnings by holding up blue paper slips that read “NO Sand Mining," then standing up, chanting, “You’re two years late with the report, you need to listen to what we have to say.”

The current EIR differs from the one completed in 2015. The amount of extractable sand was reduced from 18 to 12.5 million tons and the duration from 15 years to 12 years, allowing over 300 trips a day for the company’s trucks on a two-lane El Monte Valley Road, five days a week. The EIR listed as “less significant” and “mitigated” hot issues on the public’s agenda, such as air quality, biological, cultural and paleontological resources, fire and safety hazard, and noise and traffic pollution.

These findings caused uproar in the room.

Lynne Collier lives on Vista Del Capitan up the hill in the valley, close to Blossom Valley area. “Many of our homes are directly down on the valley and will be 100 percent impacted by this project,” said Collier. The exit out of her neighborhood is on Mapleview Blvd., same way as the projected trucks carrying aggregates in and out of the valley toward the main highways, I-8 and 67.

Marie-Michele Nakasima keeps her two horses in the valley and rides them there. “Without well water, we cannot keep the horses, the pigs, the cows, never mind the people,“ she said, seconded by the audience who started chanting, “Water is sacred, water is life!”

Milton Cyphert from the Lakeside Planning Commission questioned the county panel. “You said you’re here to just inform us about the report. Now, isn’t your job to ensure that you have a complete EIR?” Cyphert pointed out that Adams’ company hired a third party entity to complete the EIR that declared the impacts “inconsequential.”

Jitka Perez said she moved to Lakeside to live in a country town and “El Monte Valley is the Michelangelo of rural imagery.” Another valley resident, Zack Noonan, reminded the panel, “You are talking about 15 years out of our lives. This is in my backyard. I have COPD, I have emphysema, I have things going on with my lungs."

Bobby Wallace, Kumeyaay spiritual leader and protester at Standing Rock, brought several Kumeyaay residents to the meeting. Wallace spoke in his native language, addressing the crowd as “My people, you are my people.” Wallace said his family has been living in the valley for 12,000 years. “Those bones in that valley have my DNA."

In the back of the room, Adams observed the meeting quietly. Valley resident Jeanne Swaringer asked, “Where is Bill Adams? I want to put a face to the name, please stand up.” Adams stood up and Swaringer said Adams and another of his employee lied to her last year. “They both said no impact and it turns out there’s going to be a processing plant in front of my house for the next 16 years,” Swaringer added.

Approached after the meeting, Adams said, “We are not here to have a discussion.” Asked to clarify if there is a conflict of interest between his company and Michael Beck, current chairman of the county planning commission who is going to vote on this project, Adams said, “There’s no corruption. He has no connection to this project.“

There exists, however, a nondisclosure agreement executed August 29, 2008 between Adams' company, Helix Water District, and Michael Beck’s Endangered Habitat Conservancy, a non-profit organization that was hired to restore the sand pit post-excavations. Moreover, in a press release published for the El Monte Nature Preserve in 2015, Adams' company admitted to “working collaboratively with the Endangered Habitats Conservancy to design and implement the Project's restoration strategy.“

Cleveland National Forest Foundation raised $10,000 out of $35,000 needed to pursue a lawsuit against the county if the project gets approved based on a potentially incomplete or inaccurate EIR.

Adams' sand mining project will have to pass through the Lakeside Planning Committee that has an advisory role and a history of voting mostly “yes” to sand mining projects in Lakeside. The next steps would be getting the votes from the county planning commission, then the county board of supervisors.

Once again, our elected officials can't seem to do the right things on their own, and have to be sued and lose in court. Here's vainly hoping the perpetrators of this sordid affair are ruined by their greed and dereliction of duty.

their vote depends on who they belong to this week