Blind pet diagnosis: the truth lies somewhere in the middle

I propose a simple series of diagnostic tests 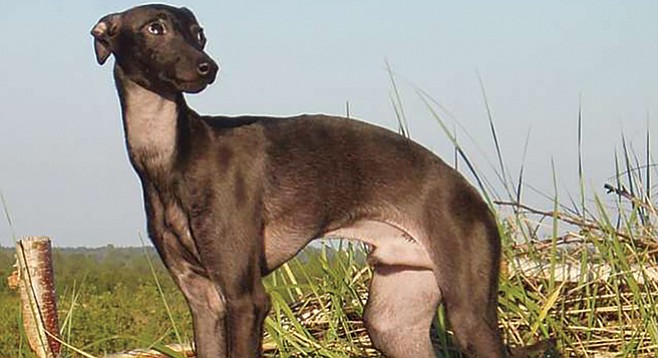 I have a 13-year-old Italian Greyhound rescue, Turbo, who I just discovered is almost totally blind. Italian Greyhounds are sighthounds. Does Turbo’s sightlessness make him an ironic, hipster sighthound? Should he move to North Park?

Hipster veterinary medicine is still a developing science, with very little consensus between different schools of thought. For example, orthodox hipster veterinarians insist no dog can be a hipster dog without a cute little mustache, either because of Schnauzer-style shaggy mustache fur, or, as can be the case with some piebald animals, because of distinctive markings on the upper limit that mimic the appearance of a mustache. At the other extreme of this raging debate, progressive hipster vets argue any pet featured prominently in one of those infuriating animal Instagram accounts warrants a diagnosis as a “hipster pet.”

The truth, as it always does in these types of things, surely lies somewhere in the middle. Before you go rushing to any conclusions with a diagnosis for Turbo, I propose a simple series of diagnostic tests.

When Turbo visits the dog-friendly patios at your favorite watering hole, does he automatically gravitate towards lapping up puddles of Sculpin instead of spilled Miller Lite?

Does Turbo howl along with your Arcade Fire records?

Have you ever found yourself saying, “Turbo will only eat organic kibble”?

If you answer these questions in the affirmative, perhaps you do have a hipster dog on your hands. Only a qualified hipster veterinarian can diagnose hipster dog syndrome, but it’s really not a big ideal because the only negative symptom is that other, more mainstream dogs might secretly complain about how hipster dogs have totally ruined the dog park and now you can’t chase a stick in peace anymore. They’re just envious.

I always find it depressing when the winter rolls around and the sun starts going down earlier and earlier every day. Never mind the time change. Ugh. Nothing sucks more than getting out of work and having it be straight up night. But maybe I’m being to negative; are there any upsides to the sun setting early during the winter? I can’t think of any.

As a basic precept, people who say nothing good happens past 2 am haven’t been living the right lives.

One of my favorite Calvin and Hobbes comics from back in the day is the one where Calvin’s dad chastises a groggy Calvin for sleeping late while Dad has been “up since 6:30 getting many things accomplished” or something to that effect. The day is a time for productive working and being busy with important things you have to do. Calvin, to his credit, disagrees.

Objectively speaking, the best part of the early sunset is that the day ends hours before it otherwise might. Once the sun sets, you pretty much have my permission, such as it is, to drink beers and get up to no good. Winter is hard enough to live through as it is, even in places like Southern California, where the winter is only slightly less pleasant than the summer. Darkness gives you a daily license to ill. Use it. The chores can wait for daylight.