In-filling with 130 houses in South Carlsbad

If you thought I-5 traffic was bad now... 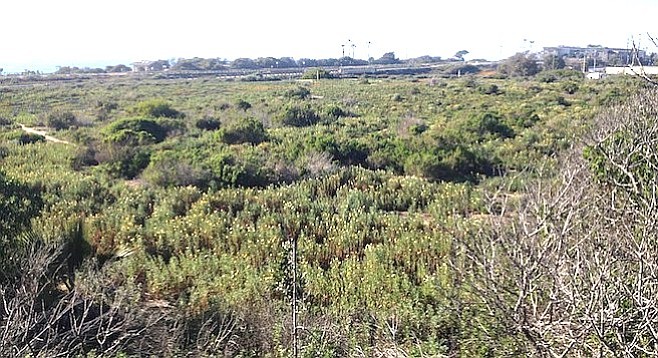 Pressure to develop a project on one of North County’s last, large coastal properties may be coming to a head, but not if the residents in the South Carlsbad community of Ponto have anything to say about it.

So far, members of a neighborhood association, People for Ponto, say they’ve been shut out of the decade-long discussions on the best use for the 11-acre property between Carlsbad Boulevard (Coast Highway 101) east to the train tracks, and north of Avenida Encinas.

A spokesperson for the group, Lance Schulte, was a city planner when Carlsbad’s growth management plan was created. “I’m not anti-development,” he said. However the group believes this is the most intensive development, existing or proposed, in the entire city of Carlsbad.

Based on a planning formula known as floor area ratio, the proposed residential development is 344 percent more dense than the Cape Rey Hilton Resort near by. “It would also be five feet taller,” said Schulte.

“The city has falsely exempted development in Ponto from providing minimum open space,” said Schulte. “We don’t know how this happened and how developers got away with this.”

Having submitted over 24 public record requests over the years, Schulte has asked, “What’s the rational?” He says the city seems to have no documentation as to why. “If you find an error [in a city general plan], then you fix it,” he says of the city’s planning.

So far the city has refused to fix the error. As late as the July 24th city council meeting, the group requested the current council take a “comprehensive relook at what’s going on down here.”

Currently the developer would have to get a change in the city’s 1994 master plan for what has been labeled the “Poinsettia Shores” area. And seek a change the coastal commission’s Local Coastal Plan, and address the city’s facilities management plan, which shows the city deficient in parkland in the area.

“There are no parks in Ponto,” said Schulte.

In 2000, the original plan to develop the property was scuttled by the coastal commission, stating the city did not follow its own Local Coastal Plan, which, according to Schulte, required the area be looked at as parkland first, rather than the proposed mix of residential and commercial.

If approved as now proposed, the current developer could build a retail commercial center on the three acres west of Ponto Road with Coast Highway frontage and an ocean view. On the east side of Ponto Road, up to 130 homes (not including low-income housing density bonuses) could be built on the 6.3 acres.

“Is this the appropriate use for this last piece of coastal land? That is for the coastal commission to answer,” said Schulte. He hopes the commission will remember its original charge when it formed in the 70s – recognizing there is only so much ocean.

People for Ponto has called for a community meeting on October 4, at 6:30 p.m. at the Cape Rey Hotel, to discuss progress made at the Coastal Commission level. They will disclose the responses on the Ponto development issues from the candidates in November’s city council races.

Footnote: The Carlsbad community of Ponto is historically recognized as the area between I-5 and the ocean, south of Palomar Airport Road to the Batiquitos Lagoon, an area once covered with flower farms when I-5 opened. The only remaining acknowledgement of the community’s name is Ponto Storage’s sign, and the Ponto Jetty at South Carlsbad State Beach.

"[B]uild a retail commercial center on the three acres west of Ponto Road with Coast Highway frontage and an ocean view. On the east side of Ponto Road, up to 130 homes..."

What am I missing? Seems to me PCH refers to Pacific Coast Highway, which is the same thing as Carlsbad Blvd. ?? And from the map, it looks like the proposed project is between Carlsbad Blvd and the train tracks, with Ponto Road cutting through.

You are correct Linda. PCH = Pacific Coast Hwy = Carlsbad Blvd. You also have the map correct. Ponto Rd zigzags through the development. (The residential portion will be east of Ponto Rd and the commercial area is planned for west of Ponto Rd.)