Once home to founder of online music store MP3tunes 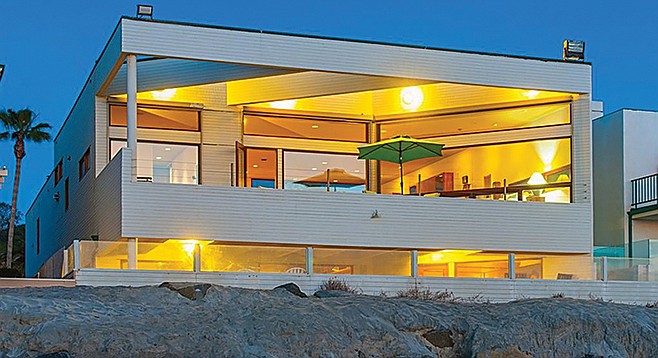 This week we present you with an opportunity to “reside in one of the largest homes on the breathtaking Del Mar beach.” 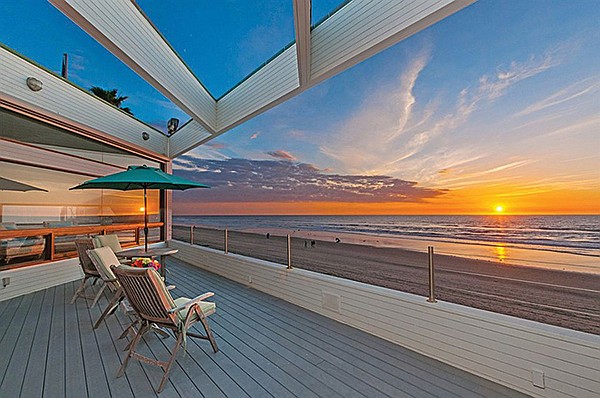 Inside, a “massive great room towers onto the beach and leads out to an expansive ocean front patio” with a spa tucked into one corner just behind the concrete privacy wall. The home features four en-suite bedrooms including the 360-square-foot master, with two additional guest baths.

Little else is offered about the home’s features and the listing is lacking in interior photos, suggesting a facelift may be in order to align the property with a new buyer’s expectedly expensive tastes.

The listing instead focuses on the neighborhood, noting that Ocean Front’s “1700 block is the only beach block with the entire block having additional owned parking on the opposite side of the lane for the ocean front homes,” ensuring that, in addition to providing parking for ten cars, “there are no homes peering down on the oceanfront homes from across the lane.”

Power lines along the exclusive lane have also been laid underground, and the lack of public beach access makes for a dearth of through traffic.

“You can walk to everything from this location: Poesidon, Jake’s [two upscale restaurants popular with the horse track crowd], Power House Park, the 15th St. corridor with Sbicca, Del Mar Pizza, Rusty Surf Shop, and the infamous L’Auberge Luxury Hotel.”

The home has publicly changed hands at least twice over the years, both times for prices not disclosed. In 1994, diet subscription diva Jenny Craig sold the property to local lawyer William Shenk before relocating to Rancho Santa Fe. In 2000, the house transferred to Michael Robertson and Leslie Burcham.

In 2013, Robertson relinquished title to Burcham and a family trust via an intrafamily deed (generally exempting a property from re-assessment).

Robertson, founder of the online music store MP3tunes, was sued by Capitol Records in 2011 for failing to use Digital Rights Management technology to limit purchasers’ access to their music. By the following year, he had entered into a separation agreement with wife Burcham and begun transferring assets into a handful of trusts controlled by the family.

After winning a $15.8 million judgment (originally $41 million), Capitol cried foul and demanded access to information on assets transferred to Burcham, claiming the separation was a legal gambit to shield assets from recovery. The case has apparently been tied up in appeals court since 2016.

Legal woes notwithstanding, the Ocean Front property was first listed for sale in late April with an asking price of $24 million. Following five months on the market with no takers, it was pulled in early September and re-listed a month later on October 6, with the price unchanged, making it the priciest listing in Del Mar. Another home a few doors down at 1750 Ocean Front, profiled here in January with an asking price of $16 million, is still available. The price there has dropped to just under $13 million.