Sip, nibble, sip as you watch the world go by

Man, this place has atmosphere 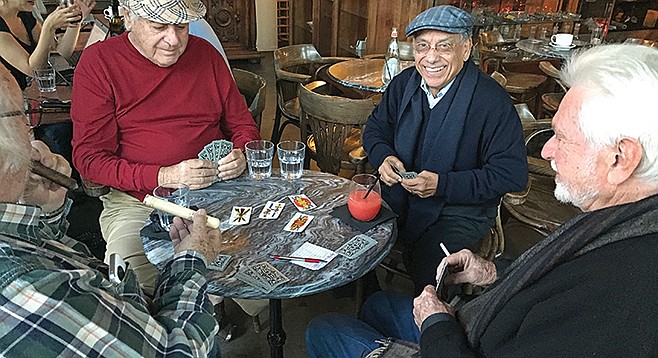 Four men sit heads-down in the middle of a card game. Two of them hold dead cigars in their card hand. They’re speaking Italian.

“Scopa,” says the gent with the merry face. “It means ‘Scoop,’ ‘sweep,’ ‘broom,’ because the winner gets to scoop the table clear. It’s a little bit like bridge, euchre. People play it in every café in Italy, Sicily, Libya, Tunisia. Every day!”

And the cards are different, for sure. Extra colorful. “They are Neapolitan design. We have cups, coins, swords, clubs, as suits.” 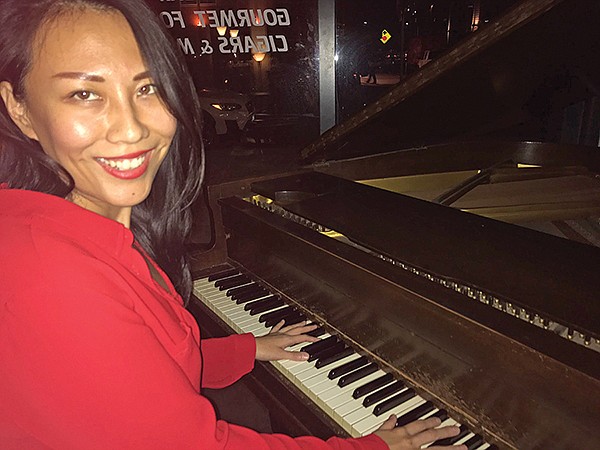 And they go back to slapping their cards on the table, just as this svelt gal gets up and heads for the baby grand piano. She sits down and starts warming into something beautiful, romantic.

Her name’s Bei Di He, from Shanghai. She works for a big architectural firm here in ’Diego. Specializes in hospital design. 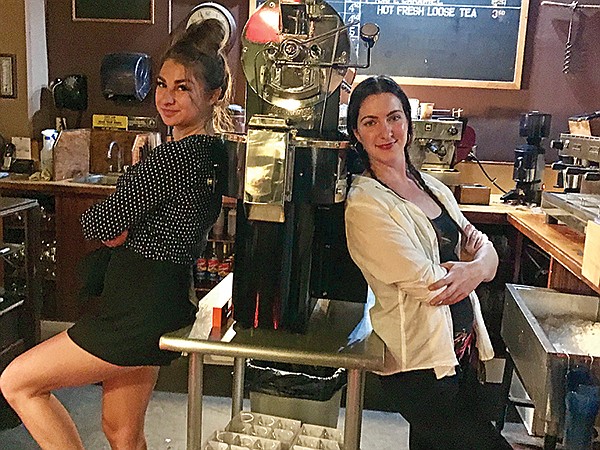 And after Bei Di’s through, French singers like Charles Aznavour, Brel, the whole galaxy of France’s folk stars, comes over the sound system.

Man. This place has atmosphere. Totally different inside from its modern exterior. I’m surrounded by dozens of antique glass tea jars, actually filled with teas, giant antique (1880) carved French sideboards, racks of antique rifles, and antique clocks stopped at a dozen different times, so you start to feel a bit lost in time yourself. Finally, behind an old glass case containing antique American magazine holders, as well as half a dozen open bottles of wine and an antique espresso machine, I spot the chalkboard menus. First one lists coffee and drinks, the next one’s simple food. Breakfast eggs go for $9.75, toast alone costs $5, bagel’s $5.25, avocado toast is $8.50, a breakfast fruit plate costs $8, and cheesecake goes for $8 too. For the rest of the day, sandwiches such as turkey or tuna or roast chicken sell for $9.75. Turkey or tuna melt costs a dollar more. Tomato soup or red pepper or squash soup, with a side of toast, costs $8. Chicken, turkey, or tuna paninis are $11.75, and a cheese plate costs $15.

So yeah, familiar standard coffee and tea house light food. Familiar…But of course! I have been here before. Maybe seven years ago. Fell in love with its atmosphere. 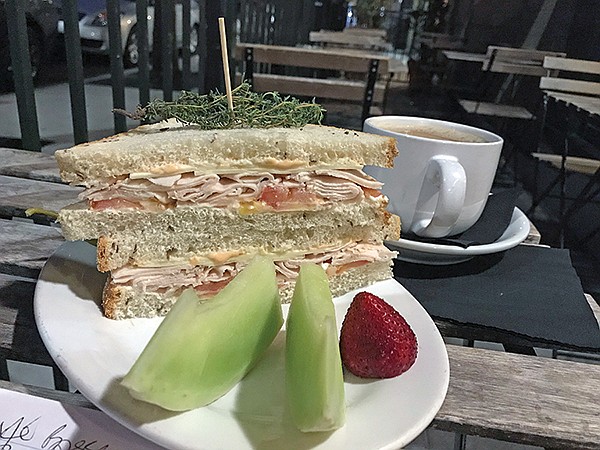 My roast chicken sandwich, plenty for a lunch

And today, here inside, Bassam Shamma, Palestinian-American from an influential family in Jordan, looks exactly as he did back then. His was a heavily French-influenced youth, which you feel as you come through the portal. But he’s not just an arty immigrant made good. He is recognized as the father of California’s coffee shop revolution. He created a rich atmospheric spot (How far back? Back when it was still cool to smoke Gauloises) down in the Gaslamp. And showed how you could turn a café into an intellectual mixing pot, with coffee and wine, and encourage your customers to stay, not rush off. “I wanted this to be like a Middle Eastern café, a little bit French, a sort of daily meeting place,” Bassam told me seven years ago. Turns out he was — is — a collector, too, so all his private antique furniture revolves through the café.

He’s up here in Bankers’ Hill now, squeezed out of the Gaslamp by its commercial success. But he has made the new spot work. Tonight, most customers look like they’re students, writing thesis papers and sipping slowly on a cawfee and not much else. “That’s the thing about this place,” says the guy I’m waiting behind at the counter. “It’s open till midnight, every night. It feels like you’re in Paris or Beirut maybe, and you can sit on a coffee with no pressure. It’s perfect for studying.” 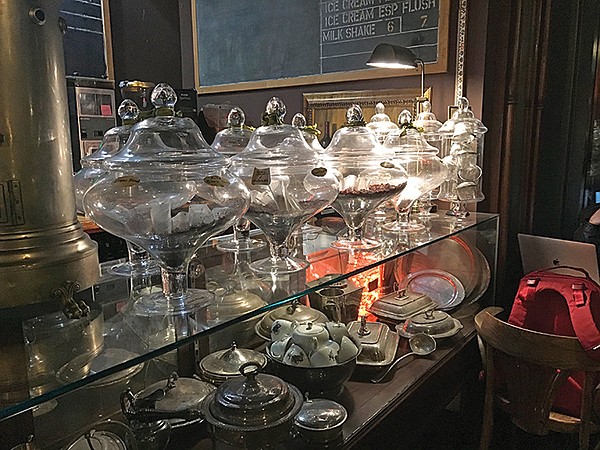 Some of the teas collected around the room

Meanwhile, Yana, a Russian gal from St. Petersburg, is waiting for me to name my food choice. Prices look about $2 up on 2013. But the food items on the menu are exactly the same as back then. I mean: don’t expect the gastronomic moon. It is a coffee and tea joint, not a restaurant. I start with a roast chicken sandwich. It is totally filling. The chicken, cheese, and tomatoes sit between rye bread slices, plus you get a couple of tranches of melon and a strawberry. It does the job.

Plus, now I look, I swear, some prices haven’t actually changed at all. I end up with a coffee (still $2!), and a baklava (still $2!), and a glass of port that I remember having the previous time ($5 then, $5 now). I head outside to catch the last rays of the sun. Oh yes. Slat-wood table, retro music playing, like “Look at me/I’m as helpless as a kitten up a tree.” So great just to sip, nibble, sip, rotating coffee, baklava, port, while you watch the world go by.

Next time — yes, I come back a couple of days later — Bassam shows me a kind of origami page-folding art he does. It’s clever, beautiful, and original. Always something different! I splurge. Get a cup of one of the hundreds of different teas. (This one’s “Russian perfumed tea.”) Then a bowl of green stuffed olives and toast ($9), followed by a pesto and cheese panini ($9.75 with melon slices). Oh boy. Could do with a glass of wine, or that luscious port. But enough’s enough. Maybe next time, when I have more lettuce in the pocket. But as I finish up, the room is still abuzz. Talk, music, scopa, huddles, cuddles. This is when I notice the different name for the place on one of the neon signs: “Atelier Bassam.” Atelier? Workshop, studio.

That about describes it.