A La Mesa brewery gets better with age

Things get funky at the tasting room next door 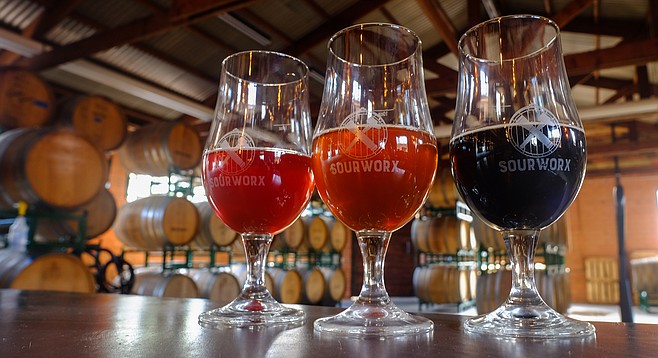 Since the day it opened in 2015, Helix Brewing Co. has offered one of the county’s most appealing places to hang out and drink beer. Though right in the thick of La Mesa’s industrial zone, red brick walls lent its tasting room a warmer atmosphere than most warehouses can muster. Behind it, design savvy landscaping transformed an enclosed courtyard into a comfortable beer garden.

Things have only improved with age. Three years on, creeping vines have started to spread across the bricks framing the courtyard, food trucks show up most evenings, and musicians perform every weekend. If a community-oriented brewery like this were to offer mixed fermentation sour ales, it might be said to have it all. 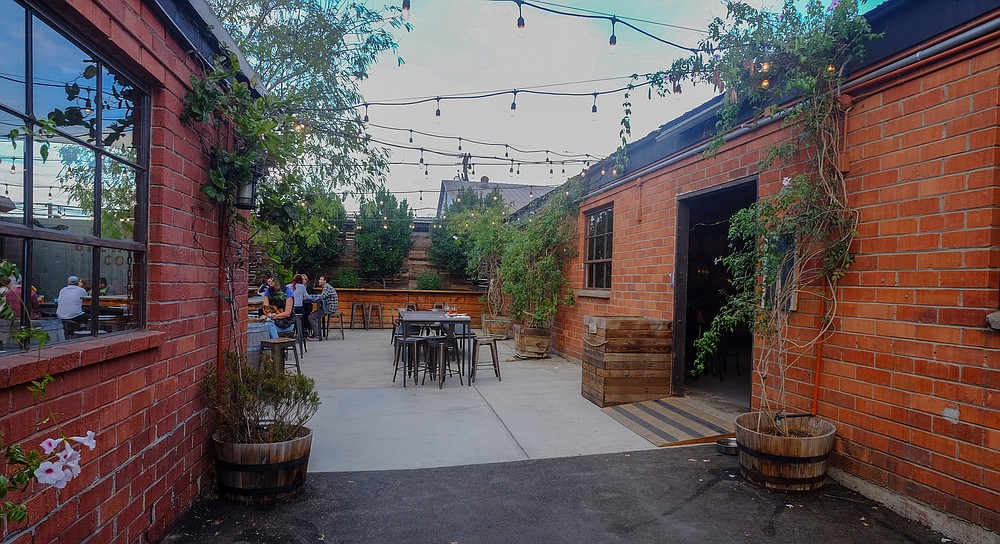 The entrance to Sourworx, and the courtyard it shares with Helix Brewing Co.

And so enter Sourworx. Early this year, Helix took over a second brick warehouse next door and loaded it with oak barrels filled with beers. In October, it debuted those beers by the name Sourworx, which operates as a separate tasting room, serving a separate menu of all sour beers. However, it opens onto the same courtyard, effectively expanding the palette of beer appreciation going down. For example, I spotted a couple drinking together: she with a flight of fresh beers, he tasting sours. Nearby, a family hanging out with their dogs ordered by round: first pints of the flavorful yet sessionable clean ales offered by Helix, then moving on to 10-ounce funky sours to pair with food from the truck parked out front.

Inside Sourworx, the décor is consistent with that of Helix, except racks of barrels replace stainless steel tanks. The triple-headed menu is split by color, offering golden sours, red sours, and dark sours. It doesn’t serve flights, but 5-ounce pours go $4 apiece, so I started with one of each style.

Each menu item features tasting notes, as well as a list of the microbes involved in fermentation. For example, the Scream With Me dark sour was made with wild ale yeast brettanomyces, plus the bacteria lactococcus and pediococcus.

I couldn’t pass on the chance to try Betting on Stars, a spontaneous sour, meaning brewed with airborne microorganisms rather than controlled addition of yeast. In effect, it’s a beer with Sourworx terroir, as fermented within a port barrel. Dark like cold brew coffee, it offered mellow acidity and delivered on promised hints of maple, with dark fruit notes likely attributed to the port.

A raspberry jam aroma was more distinct in a red sour selection, Two Emotions. The fruit addition proved far more subdued when drinking the maraschino cherry colored beer, which drank rather dry and only mildly sour.

My favorite was the golden sour, Walking Through Windows, which showed peachy orange in the glass. The oldest of the beers on the board, the non-fruited ale aged in the oak for 34 months, and its relative maturity showed in a much deeper complexity, with maple aromas that gave way to notes of canned peach and oaky wine on the palate, with a sharper yet not overblown pucker.

This beer’s been hanging around Helix almost since it opened, likewise improving with age. I take it as a good sign that La Mesa’s future looks funky.

I want to try this beer! Looks really tasty