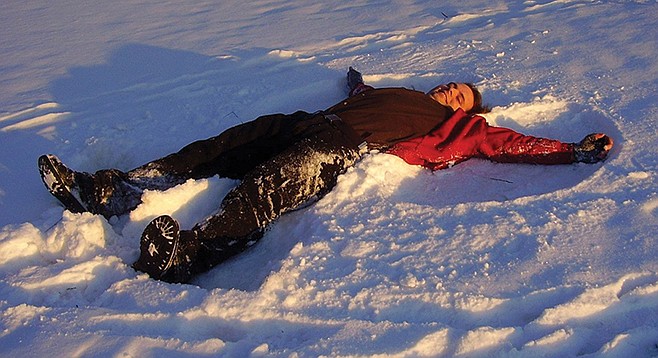 If it snowed in San Diego this winter (I mean, in the city proper, not up in the mountains) do you think local hipsters would be into it, or would their immunity to conventional enthusiasm prevent them from enjoying the spectacle?

— Nate, hoping for snow in OB

There are exactly two potential reactions to this delightfully improbable scenario:

(1) “Meh, we used to get more snow all the time in [insert name of hipster’s snow-blasted midwestern hometown here]”; or

Why does it sound weird if some hipster gives his dog a human name, like Steve or Benjamin? I don’t know why it bothers me, but it does.

Diverging from that model throws people for a loop, and I agree with you that it’s super random whenever somebody says, “This is my dog, Kevin.” What’s going on here? Am I going to find out “Kevin” works in finance and drives a late model BMW? Then again, I kinda like it. As you may have heard, we hipsters love random stuff, and giving a dog an unassuming human name for no discernable reason is pretty darn random. Watch out, Lord Angus, your ironic hipster masters may start calling you “Jeff” any day now.

Staying up on things is a lot of work. Do you ever get frustrated with all the stuff you have to do to maintain hipster credibility? How might one avoid enervation from the effort of keeping up on things, so to speak?

I think I know what you’re talking about. It’s the feeling you get when you’ve been texting your friends for three hours and nobody can decide which new brunch destination you need to get drunk at tomorrow; and you haven’t even heard of two-thirds of the places on the list; and so you look deep inside yourself and think, why don’t we just, like, go to Denny’s?

Yeah, sometimes I get that “I can’t even” feeling. You know the one. It’s sort of like the feeling you get when you find out professional wrestling is fake; or or when you realize all Froot Loops have the same flavor, irrespective of color; or when you learn the actor who played Screech on Saved by the Bell turned out to be the kind of sad example of a human who capitalizes on his child stardom with an awkwardly named sex tape, and who stabs someone in a bar on Christmas day. Like, why do we even bother getting up in the morning when your whole life has been a lie and the real story is always way worse than anything you could make up?

I take those thoughts and I bury them, where they can do no harm. Remember: the best way to deal with negative thoughts is to repress them before they gain a life of their own.