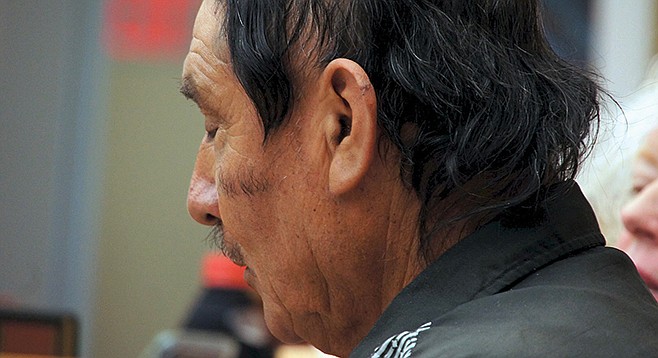 "They haven’t removed the stitches, I still have the stitches in there.” Victor touched his ear when he spoke about that weird day when his ear got slashed. It happened on March 31, when he asked for keys from a renter. 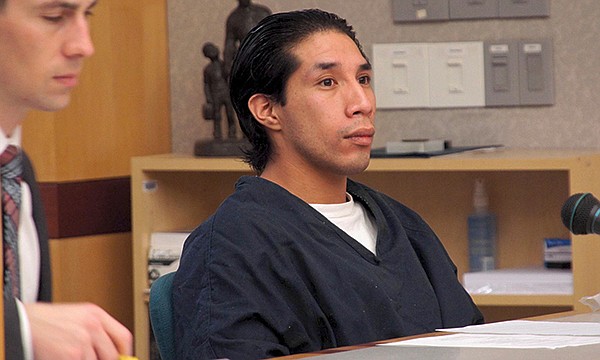 Jose Alberto Diego pleads not guilty, but eyewitness testimony and and extensive and violent criminal record are not in his favor.

The damaged part of Victor’s left ear looked as if the skin had grown over the stitches there.

Victor claimed that Jose Diego, his renter, did not hand over his apartment keys but instead pulled out a knife. Victor spoke about the alleged attack when he was in court on July 9.

An attorney asked where he lived, but Victor did not seem to know his own address in San Diego County. “Well, we were in the apartments, I don’t know how to read so I can’t tell you what number it is, but that is where we were.” Victor’s wife Maria said they lived near Grand Avenue in Escondido.

Both Victor and Maria testified with assistance of a Spanish speaking interpreter.

Maria said she put an ad up in a local supermarket the beginning of March and “Yes, that same day I rented it out.” They already had another couple sharing their Escondido apartment, before Jose Diego joined them.

Maria said she asked for $340 dollars but “He gave me a hundred and seventy-five dollars.” They had no written agreement.

Jose Diego slept and kept his things in a part of their living room.

Maria said her husband and the renter were face to face or “head to head” when Victor asked for the keys and Diego pulled out a knife. She indicated the size of the knife by spreading her hands apart; the judge guessed the knife was 8 or 10 inches.

Maria said she witnessed the fracas, “He cut him in his ear and in his arm. He just knifed him.”

She said Diego then waved the knife over his head and “He started running all over the place.”

Maria said she was able to escape the apartment but, “He walked outside, he was following me, because I was on my way to talk to the manager, to ask her to help us, because (Victor) was bleeding a lot.”

Victor confirmed to the court, “I rented out the room to him, yes.” But, he said, “He did not pay the whole thing he just paid part of it.” And Diego had been with them the whole month when “I told him that the month was up.” He wanted Diego to leave. “Because he was not paying, that is why.... Yes, I told him it was time for him to go... because we had already talked about it before.

When the week was up, and Diego didn't pay up, “I told him it was time to go,” Victor later testified, “because we had talked man-to-man so his word had to be worth something.”

Apparently Diego did not see it that way. “No, he just pulled out the knife and he told me that he was going to kill me. That was it. And he started knifing me.”

Victor said he and Diego were in the living room, where the latter’s things were. “He had this thing off to the side where he would put his clothing in, this plastic thing, and he pulled it from out of there. He had this plastic container there, that’s where... he pulled out the knife. It was a white knife. Well, it might have been a kitchen knife, because it was like a white knife.”

Victor showed the judge his wounds, and said Diego had slashed “me here and here and here — my finger, my arm, and the ear.” The alleged victim said a doctor stitched part of his finger back into place because it “was open.” He said, “Because I held up my hand, and that’s what happened, because he caught me on the finger.” Victor said the doctor put stitches in his forearm, five or six.

Prosecutor Rikole Santin asked Victor if he believed that Diego wanted to kill him. “What was I supposed to think? I was already dripping in blood,” he said. “When he was stabbing me he told me he was going to kill me.” And, “Well, he could have killed me.”

The witness was cross-examined by defense attorney John Wilschke. Defense counsel seemed to suggest that Victor had his own knife, one he used at the plant nursery where he worked, and his knife had some kind of wrapping around its handle.“No, I don’t have weapons, I have never had weapons, I am not that kind of person,” he insisted.

And Victor insisted he did not threaten Diego, “No, no, never,” but he did concede, “I was speaking in a loud tone, but I didn’t do anything to him.”

Who’s trying to kill whom?

After the incident, Victor recalled, “He left right away. As soon as he knifed me, he left.” Diego “started running downstairs” and “took off running outside with the knife.”

But Diego wasn’t running to escape authorities. On the contrary, Victor explained, “He’s the one who called the police, because I did not call the police.”

A SWAT officer who responded that day said there was some confusion, because the man outside had a cut on his hand and was bloody and claimed that the stabber was still in the apartment.

In court Victor said, “After that he went outside, I stayed in the living room…. When I opened the door, the police were pointing these big machine guns at me.”

Victor thought “they were trying to kill me.”

Public records show that Diego has four prior misdemeanors: two resisting arrests, one battery, and one theft from library. He has convictions for injuring a spouse and failure to appear in court, according to the prosecutor.

Mayhem is a specific crime that causes permanent, disabling, or disfiguring injury. The wording in the penal code includes “slits to the nose, ear or lip….”

The other three new charges are one attempted murder and two criminal threats.

This is a classic example of how NOT to rent out a room in your home. RE: "He gave me a hundred and seventy-five dollars. They had no written agreement." There were two mistakes right there. Also, many landlords in their rental agreements state that you cannot sublet without permission. Generally, if you want to have a paid "roommate" then that person must fill out a rental application and undergo a credit check. In this case, Victor and Maria went looking for trouble, and unfortunately they found it. There is a good reason why sensible apt. owners/mgt. companies screen all prospective tenants.