Best and worst of times for Soon-Shiong 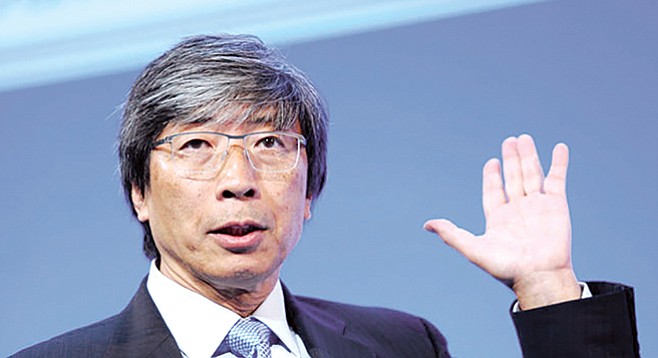 Patrick Soon-Shiong, reputed by some to be the richest man in Los Angeles and the wealthiest physician in America, is currently worth $6.8 billion, per a real-time ranking by Forbes, which as of November 20 pegged him at number 68 on its top 400 list.

From Gustavo Arellano's Ask a Mexican column in the OCWeekly

Though the biotech maven likely won't be going hungry soon, the Forbes wealth meter estimates that the personal fortune of the owner of the L.A. Times and San Diego Union-Tribune has dropped by $6.1 billion, slightly less than half the $12.9 billion he was said to be worth in September 2015. 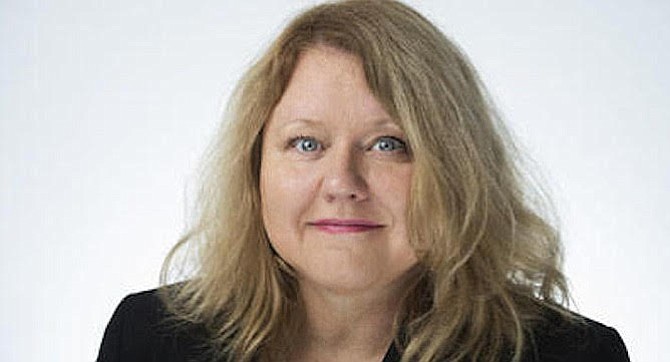 The Forbes rankings are guestimates and don't offer an explanation for Soon-Shiong's negative asset spiral, but the billionaire's patchwork of investments, from a small piece of the L.A. Lakers basketball team to a would-be cure for cancer to $500 million-plus for the pair of troubled California newspapers, are thought to have something to do with it.

On November 16, Soon-Shiong's flagship biotech NantHealth, an offshoot of his NantWorks, reported losing almost $100 million in its third quarter, compared to a $42.4 million loss for the same period last year, the L.A. Business Journal reports.

Another bad omen arrived in August when Verity Health Systems, a chain of California hospitals operated by a Soon-Shiong subsidiary, filed for bankruptcy.

"A big, rude awakening, from 'I’m the savior' to, 'Maybe I’m going to keep my promise to you, maybe not,'" an unnamed hospital executive told Politico about the billionaire's promised rescue.

Soon-Shiong's falloff on the biotech front comes in the midst of a general market crash in high-tech stocks that may not portend well for the billionaire's other public and private ventures gathered under the NantWorks banner.

After closing his deal for the Times and the U-T in June, Soon-Shiong has been on a high-stakes media roll, declaring at an investment conference that video game networks could be used sell and distribute news. Then last month, the newspaper neophyte proclaimed at a Pacific Council of International Policy dinner, "We are going to launch our own TV network,” per the L.A. Business Journal.

Soon-Shiong said he wanted to create a high-tech news service in partnership with the New York Times, The Washington Post and The Atlantic, now controlled by a foundation run by Laurene Powell Jobs, the widow of Apple founder Steve Jobs.

Meanwhile, the billionaire has continued a hiring spree at the Times. Ex-OC Weekly editor Gustavo Arellano, who is to become a feature writer, leads the latest round of hot picks.

But executive editor Norm Pearlstine's first hire for the Times just four months ago has already departed. Per LAObserved, a November 12 Pearlstine memo informed staff that "Kris Viesselman is no longer with The Times. We thank Kris for her service and wish her well in her future endeavors." No reason for the departure was given.

As earlier reported here, Viesselman, named in June to the newly created post of Chief Transformation Editor for the Times, had been a managing editor of the Union-Tribune under previous ownership.

Of her Times employment, a June 17 news release said: “She will work closely with editorial and business-side colleagues at the Times and she will have primary responsibility for developing systems and synergies between the Times, the San Diego Union-Tribune and other publications in the California News Group.”

“I am thrilled to be returning to California to work with the Los Angeles Times and the San Diego Union-Tribune – two brands that I love – to help create a journalism-fueled strategy that will ensure that these great institutions thrive,” the new hire said in the Times news release.

Back in June 2010, Viesselman's arrival at the Union-Tribune was similarly heralded with a statement by editor Jeff Light. "Kris Viesselman, formerly director of interactive publishing and digital product development at National Geographic, is our new managing editor and creative director," said Light. "She will lead a redesign of our newspaper, which will roll out beginning in August."

The U-T did not turn around as hoped and eighteen months later the paper was sold to Republican kingpin Doug Manchester, who started a widely-mocked U-T branded cable TV operation that failed in February 2014, reportedly losing $500,000 a month.

I thought David Geffen and Eli Broad were richer than Soon-Shiong.

I always thought being Chief Transformation Editor sounded more tronc-y than real world, so no loss that Ms. Viessleman has moved on. As for Dr. Patrick's declining fortune, he will have to just say no when LA moguls offer him shares in sports franchises which seem to be his weakness. But good move to hire Gustavo Arellano who had been contributing LAT op-eds from a blue collar Latino perspective. His most recent column was skeptical about our flashy handsome new Governor Gavin Newsom and his starchy victory speech.

The UT is a worthless piece of trash. In my condo complex only two people still subscribe to the UT. One gets the Sunday only and that leaves one who gets the daily. Neither one has a computer. The UT is nothing more than a Los Angeles south rag.

I still find it inconceivable that he shelled out a half-billion bucks for two shrinking and struggling newspapers. They could not have been profitable, given the trends in the industry, and if a business isn't producing a profit, it is worth nothing at all. He, we can presume, thought that they could be made profitable in some way, but a turnaround in newspaper readership (printed copy style) is not going to happen, ever.

Not such a smart dude, is he?

Warren Buffett owns a newspaper chain [BH Media], and apparently it's profitable. And Buffett IS a smart dude.

I did some backgrounding on BH Media, and learned that Berkshire Hathaway bought the Omaha paper and six others in 2011. Perhaps Buffett wanted to insure the local paper there stayed in business. For the most part the papers it owns aren't in big cities, although there are some exceptions. Last summer BH turned over management of the papers to Lee Newspapers, while retaining ownership. There was a report in the Omaha paper about Buffett being troubled with the prospects for daily papers. My take is that he and BH are not really deeply involved in media, and don't see those papers as important for the corporation. What I didn't learn was how much BH paid for those papers. If they paid little, that's one thing. If they shelled out a half-billion, well, that was foolish. Interesting situation.

"3. The SDUT management team, under Platinum, made the company profitable again, through product improvements and other moves."

--Other moves is the correct answer. The company was profitable because hundreds of employees were laid off under Platinum. There were no product improvements.

--Kris and Jeff Light were in charge of UT-TV when this video was produced about Bob Filner. https://www.youtube.com/watch?v=7qRhe2WojCg

--Kris and Jeff Light held a meeting with a female newsroom employee and asked her to dye her hair blonde on behalf of Doug Manchester.

--Sexual harassment was rampant at the U-T under the leadership of Jeff Light and Kris Kris Viesselman and they did nothing about it. They completely turned a blind eye to it.

You are absolutely correct about "improvements" in the U-T. It has steadily deteriorated over the past decade (actually longer than that) in its news coverage and accuracy. The newsroom is decimated, and as far as editors go, fuhgeddaboudit!

RE: "No reason for the departure was given." Viesselman probably left to spend more time with her family. ;-) 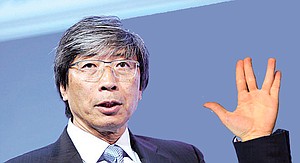 That's the Vulcan salute, if you missed it!

In her comment, is Kris Viesselman trying to align herself with Platinum Equity, one of the most vile companies in the world, in an attempt to distance herself from Papa Doug and John Lynch, two of worst people on the planet. Man, that is a tough position to be it. Regardless, she carried out the marching orders of each of them.

Hmmm. Many years ago, I knew a woman who could excuse any/all kinds of strange conduct by other women. She'd say "A girl's gotta do what she's gotta do to survive." I might add that this was in an office environment, not a strip club or other such establishment. Oh, and it wasn't involving anyone who was poor, struggling, or in dire straits. No, it was her way of saying that anything goes, and excusing it when it did. Case in point?

To borrow from John Prine, your checkbook won't get you into Heaven anymore.

Well, I don't think Andrew Carnegie was looking to get into heaven by giving away $350 million while he was alive. That would be $billions in today's money. I believe he left behind an incredible legacy that made a huge difference. Others can argue about his business practices, as capitalism does have its dark sides. And Bill Gates has pledged to give away at least 90% of his giant fortune, reportedly motivated by Carnegie.

Except you were not referring to either Carnegie nor Gates. So your comment is not relevant.

It IS absolutely relevant because it's about a super rich "robber baron" who gave away a fortune. And it wasn't at all about him getting into heaven via checkbook. You might want to read up on Carnegie, as he was quite different than his perceived image. As for Prine, I couldn't state one of his song titles for a billion dollars.

Given the fact that both Carnegie and Gates were not mentioned in either the published story nor in any of the accompanying comments and only mentioned by you as a response to my response, they are indeed NOT relevant. Seems you would understand that, what with you being a former editor of a publication and all.

And as for "reading up" on Carnegie, well let's just say that I know more about him than you apparently think I do and probably more than you do. As I have noted here on a couple of occasions, much of my ancestry originated in GB, including the same parish in Scotland that the Carnegie clan came from, and they ended up in the same area outside of Pittsburgh, around the same time as the Carnegie family. It's not out of the question that they were on the same boat out of Glasgow. So yes, I have "read up" on Carnegie.