“Absolutely no other criminal record” 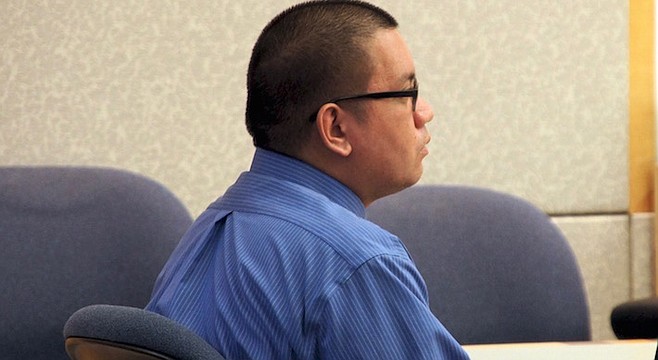 An Escondido man created a bizarre birthday bonfire for himself the day he turned 31, overnight between September 12 and 13, according to a police officer who testified in court months later. 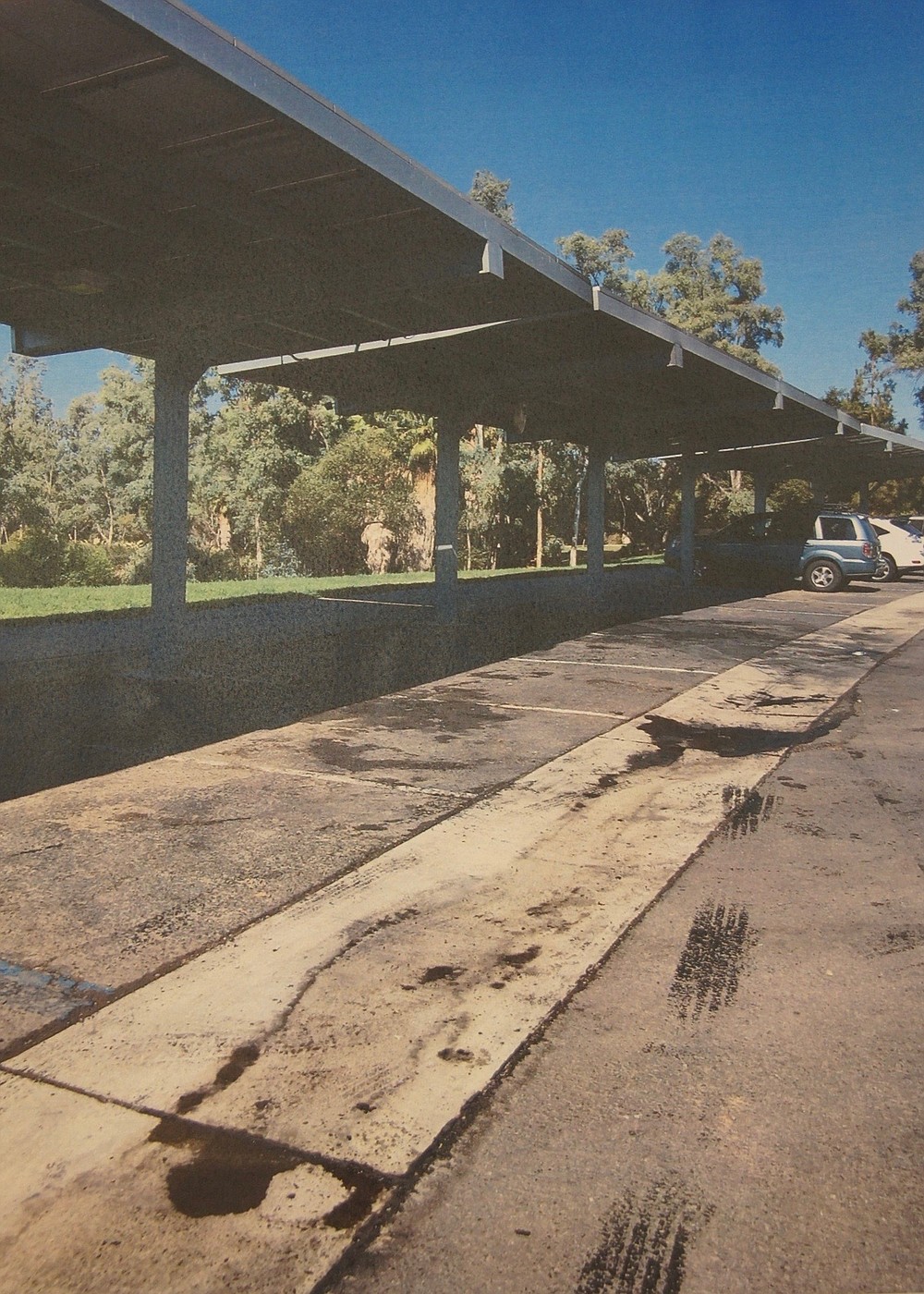 Where car and car port burned.

Officer Adam St. John said it was about 1 a.m. when he responded to reports of a fire under a car port in Kit Carson Park, on Bear Valley Parkway. The cop found a red Honda Civic half-consumed by flames when he arrived. The blazing car was registered to Juan Nicholas Cruz, who had just turned 31 , according to records. 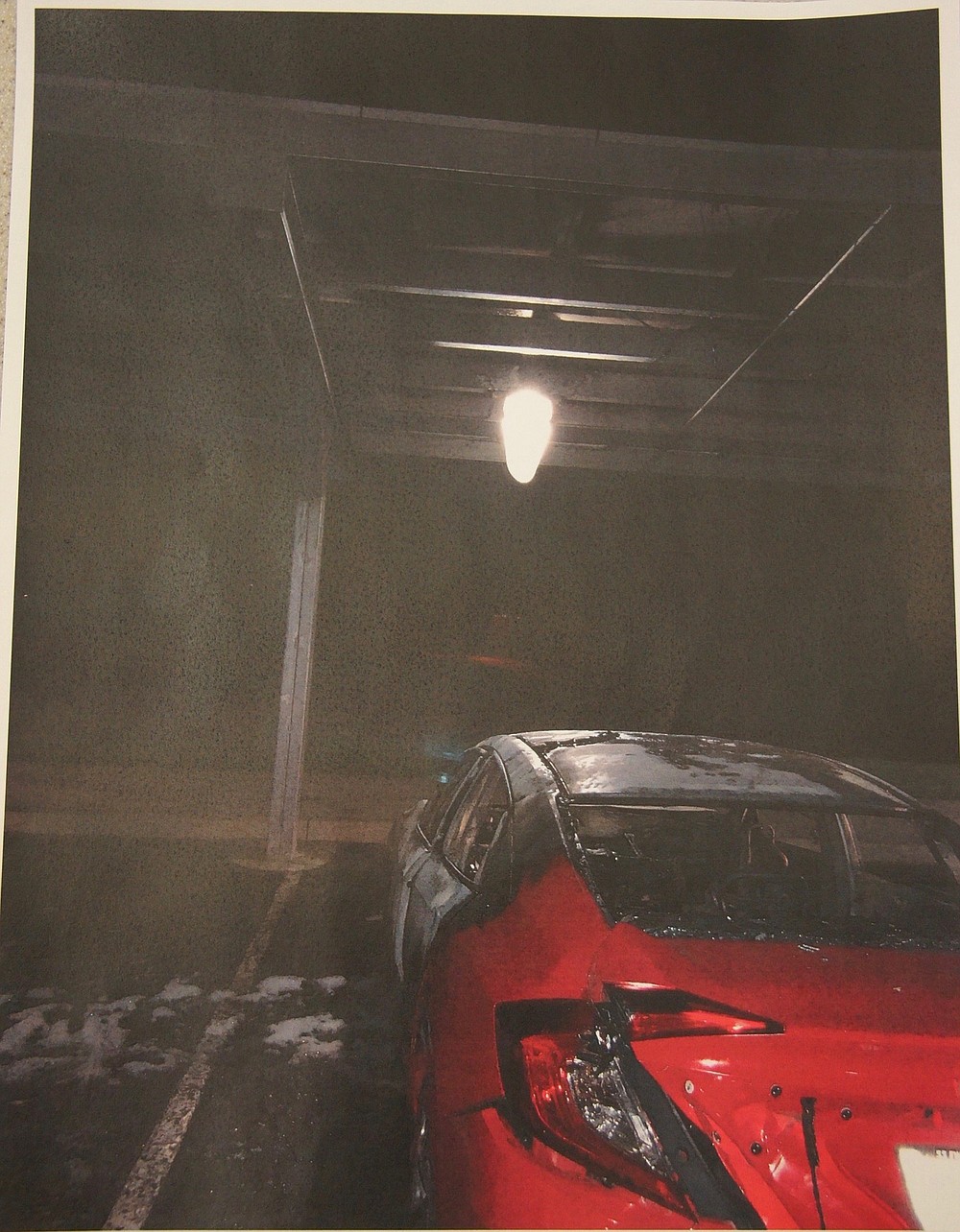 The Honda was severely damaged.

Emergency responders quickly extinguished the flames before they spread.

The Honda was severely damaged, but the car port itself seemed to only suffer smoke damage, thanks to swift response of fire-fighters. One plastic light fixture, affixed to the carport above the flaming car, ended in a “melted” shape, seen in evidence photos submitted to a judge during a court hearing on November 14.

Fire personnel were still working at the location when officer St. John noticed a man standing in the darkness, about 50 yards away. That man was eventually identified as Juan Nicholas Cruz, the owner of the destroyed car. Cruz agreed to speak with cops, officer St. John said.

Cruz allegedly confessed that he had purchased a gasoline container at one gasoline station and then went to another gasoline station to buy seven dollars worth of gasoline. He reportedly admitted pouring some gasoline into the engine compartment of his own car, and then he poured the rest of the gasoline onto other parts of the Honda. Cruz reportedly got into his car, while it was parked under the carport, and then turned the key in the ignition. He allegedly said he expected an explosion when he turned the key, but that did not happen. So he used a cigarette lighter to start the flames. This according to the sworn testimony of officer St. John.

Juan Nicholas Cruz reportedly told officers that he remained seated inside his car, texting goodbye to his loved ones, until the smoke got to be too much for him. Then he abandoned his plan and got out of his car.

Defense attorney William Stone told a judge that Cruz had been previously diagnosed with depression, but he had never gotten proper treatment. The attorney said that after Cruz was arrested that night, he was able to get effective medication, and that he was doing much better now. The defense attorney told the court that defendant Cruz has “absolutely no other criminal record.” Cruz’s family put up the $25,000 to bail him out, and the despondent man is currently living with his father, and Cruz’s family is very supportive of him, his attorney told a judge. During the hearing in November, there were five concerned-looking persons seated in the courtroom gallery, and they nodded and looked hopefully at the judge. Attorney Stone said that Cruz’s family is committed to his well-being and that they appear at every one of his court hearings.

Attorney William Stone pleaded for the judge to reduce the one felony charge of arson to a misdemeanor.

Prosecutor Daniel Gochnour pointed out that there was a wooded area near the location of the carport fire, and that there are residences on the other side of those woods. And prosecutor Gochnour wondered aloud if Cruz’s problems might resurface and his behavior could become dangerous again.The prosecutor suggested that defendant Cruz might benefit from supervision on felony probation.

Honorable judge Carlos Armour said, “Treating this as a misdemeanor is not sufficient to ensure public safety.” The judge remarked that emergency personnel are also at risk, when they respond “at code” for reports of fires.

All attorneys and the judge too, noticed on the record that the timing of the preliminary hearing, November 14, was at a time when deadly fires were raging throughout the State of California, and the official death toll from the fires had climbed over 50.

Judge Carlos Armour commented regarding the defendant, Juan Nicholas Cruz, “His underlying behavior needs more intervention, to monitor and enforce his behaviors.” The judge said, “This matter must remain a felony and not a misdemeanor.”

Juan Nicholas Cruz, 31, was ordered to answer one felony charge of arson. He is currently on bail, and is expected to return to San Diego Superior Court on January 7 2019, to confirm a trial date in February 2019.

He should be sentenced to the max and forced to reimburse for the costs associated with his case.

Since "the despondent man is currently living with his father," how could he pay for it?

You're right. It isn't his fault. Just let him go. He didn't mean it. Maybe your home will be what he burns down next.