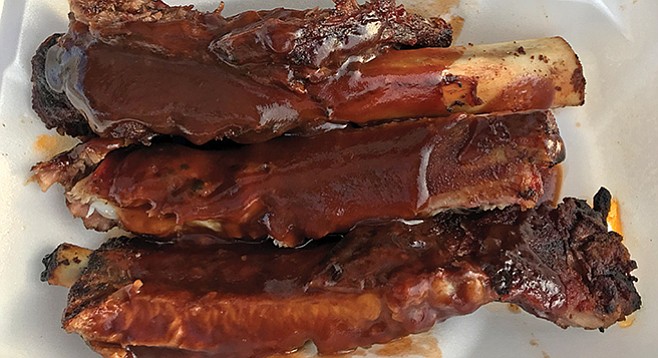 What is going on up here?

This is Chollas View-Mount Hope. Guess I’ve been looking for ribs in all the wrong places, heh heh. 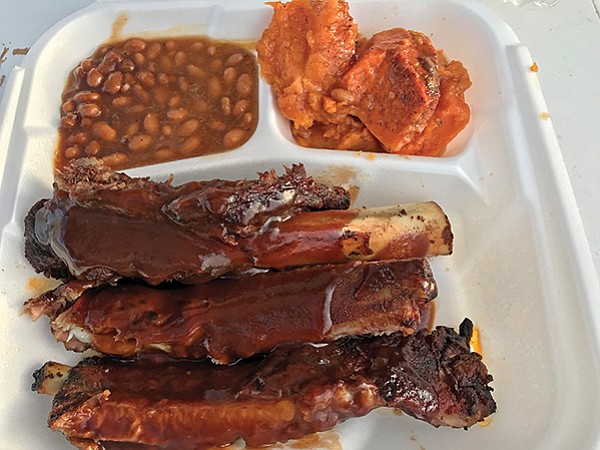 We’re talking Market Street in the 4200 area. Trundling east in the #5 bus. BBQ desert till, wow! One, two, three of them in two blocks. Pull the chain, hop out, start navigating my way back.

But here’s where it gets weird. First BBQ place has a really great name. “Bowlegged Bar.B.Que.” I go to the door. Locked! “Closed,” say a couple of signs. I can hear women laughing behind. But nobody comes to the door. Same with “Taste of Chicago Grill.” Big sign says “Now Open.” But a smaller sign below, and in the barred door, “Closed.”

This time of day? Headed for five? 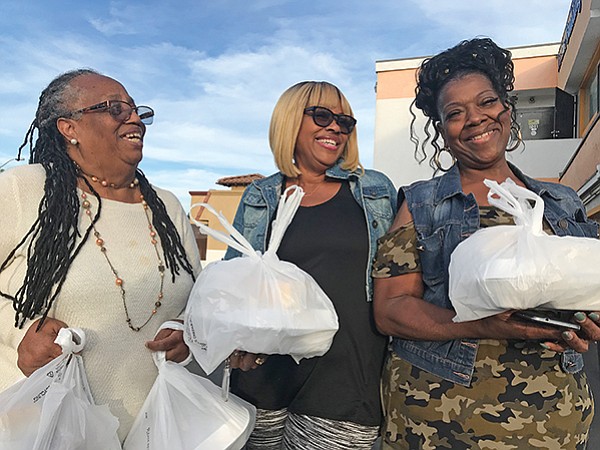 Lucky for me, in a set-back spot between, next to the Fenix Beauty Salon, here’s Kim’s BBQ. “Texas Style.” It has two “Open” signs in the window. And a couple of women ahead of me cross into a fenced tarmac area and to the front door.

It opens. Alright! I follow them in. Specially since I see a huge black smoker out behind that looks all business.

Inside’s pretty small and crowded with just the three of us here. Chunk! Chunk! Chunk! Guy in back’s using a cleaver to cut down ribs on a board. He’s a small wiry man. You can tell he’s done this a lot. 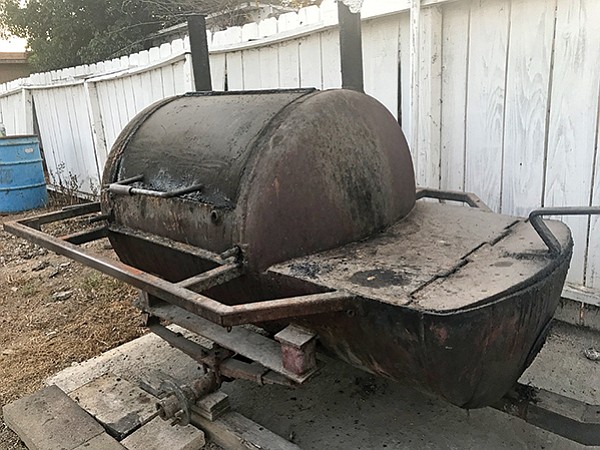 The giant smoker in the yard

The two ladies — Cheryll and Gwenette — are both going for the pork rib dinner. Cheryll’s getting the $9 deal, the ribs plus two sides. She’s getting baked beans and collard greens. (They have the whole southern line-up of sides, from collards to mac salad, potato salad, candied yams, red beans, rice, on and on.)

I’m still hemming and hawing when another lady comes in. Bernadine. She knows the others. Lots of conversation. Lots of laughs. She orders a BBQ rib dinner, a BBQ chicken dinner, potato salad, yams, and cornbread. She has a family to feed.

Looking at the yellow menu panels, I can see this place is going to be a go-ood deal. All dinners — that’s beef rib, pork rib, brisket (the meat above the shank of the leg), and chicken — are $9 with two sides. Top price seems to be for chitterlings (mainly intestines), $15 with two sides. But if you’re light in the pocketbook, they have sandwiches that look like total deals. Like hot link for $2.50, beef brisket for $4, beef or pork rib for $5.50. Or just half a chicken’s $4.50. Then if you want to go for straight ribs, a half slab of beef is $6, or pork is $9. 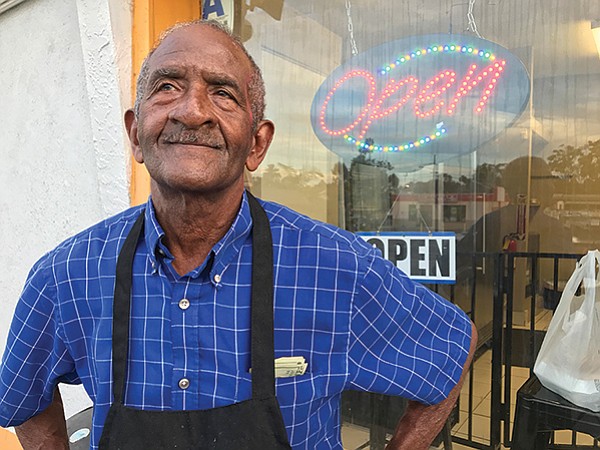 The gent running this — moving between the chopping block, the microwaves, and the front counter — is Wilbert. He’s from Oklahoma. “I make everything here,” he says. “Nothing comes from outside.”

So he must be cooking it all, from cornbread to collards, to those slabs of pawk.

Okay, so now, my turn. Got to take the daily special. Three pork ribs plus sides of baked beans, and hey, candied yams are addictive in the way chocolate is.

“Like a beef rib with two pork?” he says.

Wilbert is definitely old-school. Although he has bent a little to BBQ sauces here in California. “In Oklahoma, my Dad, name’s Hugo, was used to Texas sauce or the Carolinas. More savory. More vinegar. Here I’ve gone to more sweet. It’s what people like.”

Then he’s back whacking ribs and warming up my beans and yams. One of the ladies is agreeing how the BBQ sauces back east were more vinegary, but that ever since Mr. Heinz brought in his ketchup (in 1857, says Google), most places caved in and made his sauce the basis for their sauce.

Goodness gracious: Wilbert brings me my polystyrene box. The thing’s packed. And when I take it outside to eat at the one table there, the ribs are delicious, and big. Even the beef is tender. But also their sauce is more savory than sweet. And actually, it’s the smoke that dominates everything. You know these babies have been in that big black barrel for hours.

’Course the baked beans and specially the candied yams more than make up in the sweetness department. Wilbert gave me two slices of bread, and they nicely counter some of the richness.

“They’re not on the menu,” says Rodney. He’s been coming in for ten years. “You’ve got to ask for it. But he always has them. Same price as the regular ribs.”

Man, pays to know insiders. Guys say the tips are the most tender. I thought it was the other way round, but what do I know?

What I do know is this place is a discovery. A deal. And real. Wilbert says his dad Hugo had a BBQ place on Imperial Avenue, when they first came. “I just do this for a hobby,” he says.

One thing I forgot to ask was about Kim. Who’s Kim? Guess I’ll have to ask Wilbert when I come back. Rib tips are beckoning.

There are two excellent things that come from Oklahoma: wonderful music and singers, and delicious comfort food.

Mount Hope?! That's something Dolores never did, I wanna tell ya'. Hey, but seriously, what's the big deal about rib tips? My Bubbie and Zadie always told me they were 50% fat and 50% gristle.

I always enjoy, maybe not agree with, Ed's reviews. One thing I don't enjoy is food that is microwaved. Reading this concerns Yelp reviews says he nukes the food while it is in the styrofoam container.