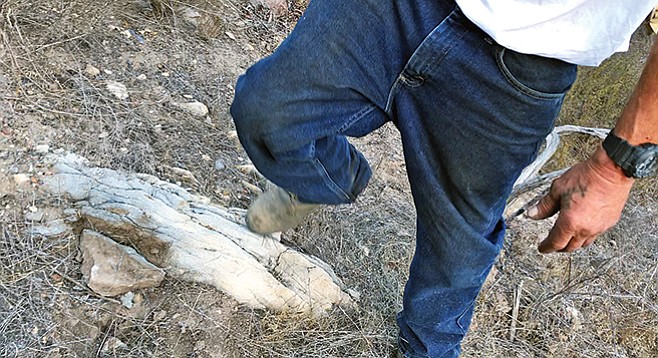 “Donald Sheckler always told me, ‘If you find schist, there’s gold somewhere nearby.’”

Jim looks at the piece of schist rock he’s just kicked out of the dirt here, halfway up Mine Canyon. It’s a kind of soft, gray slate. 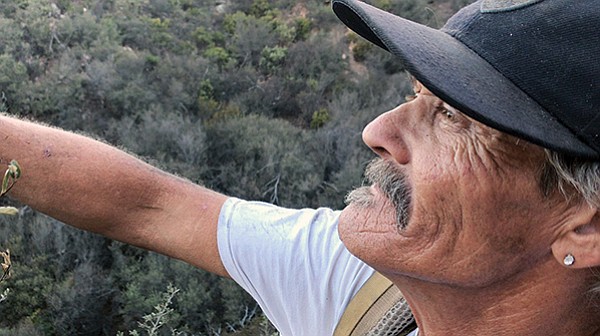 “He was a mining engineer, lived in Dulzura. He says there’s gold? There’s gold.”

I met Jim Pintor and his buddy Ron at the Dulzura Mini Mart.

“There was a gold rush in Dulzura back in the day,” says Ron. “It was crazy. And of course Wyatt Earp made it up here. He helped start a tent city over at Mulligan’s Flats. They even laid out streets for a town. Built a house of joy, hereabouts, too. Hooker Heaven.” 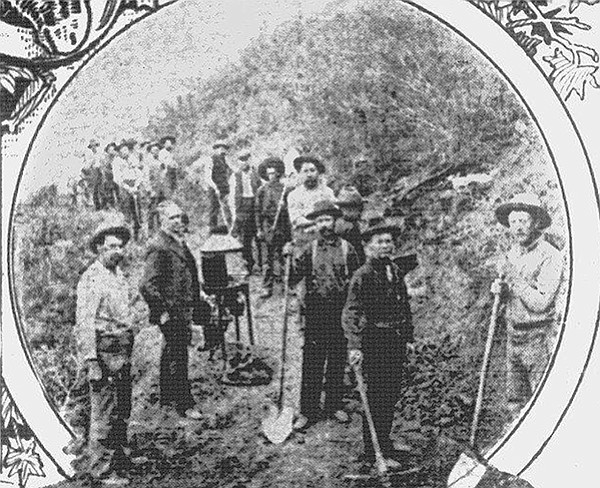 March 1908 picture from the San Diego Union: miners in the Dulzura goldfield

Dulzura, in other words, was the Next Big Thing.

“The Dulzura District is the most extensive and richest gold bearing deposit in the world today,” Col. J. Lovick Johnson, mining engineer, told the San Diego Union, according to writer Richard Crawford in the U-T, in 2010.

“I’ve sent my samples to Los Angeles, and feel sure of great results,” said Earp. “I predict the greatest boom in history.”

Three miles up the road, we’ve turned off Campo Road — Highway 94 — onto Marron Valley Road. We’re on dirt within 20 yards. Hills start looming above us. Ten-acre horse ranches tail off, and the land looks the way it has probably has for at least 12,000 years.

We leave the road and start climbing the sides of Mine Canyon. “See? See that scree?” says Jim. “That’s tailings from a mine. And see that line through the trees? That’s a wagon road they built to bring supplies, pipes, food, and take down the ore. Hundred years ago. Still a scar.”

Problem is, I’m looking down, not up. Because Jim’s also always saying, “Watch for rattlers. The young ones especially. They’ll spurt all their venom into you. The mature ones realize you’re not food, so they won’t waste their venom. OK. See up there? The bare patch? That’s a mine that has collapsed.”

I was hoping for romantic entrances, holes in the hills. Instead they’re just exposed patches of rock and scree.

“There are some mines with traditional entrances, but the survey maps often don’t even show them. Partly, it’s they don’t want amateurs going into old shafts and getting lost in there or causing a collapse. You’d never find them.”

Halfway up a steep hillside we’re climbing, a mine bursts out of the bushes. You can see where the entrance was. Big slabs of rock have fallen across it. It has a big scree of tailings even today. “Nobody does this amount of digging for nothing,” says Jimmy.

But Dulzura never did produce a whole lot of gold. The boom turned to bust in weeks.

“Do you believe there’s still gold around?” I ask Jim.

Jim just gives a sly look that tells you one thing: he’s still a true believer. “‘Where there’s schist, there’s gold,’” he says, holding his piece of the gray rock.