Tie your key inside your shorts with the waistband string 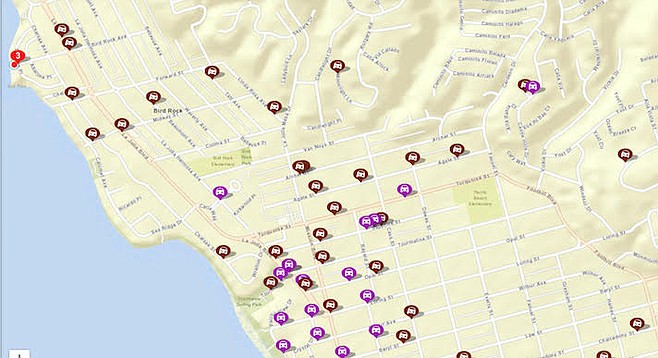 Racheal posted a photo of a SUV with a broken passenger side window and a missing door handle on her social media — and warned her network: “Those who surf, please do not leave your keys, wallets or any valuables in your cars. Thieves are targeting vehicles whose owners are surfing.”

I direct-messaged her on October 31 and she responded: “It happened last Friday (October 26) at 4:30 pm on Dolphin Place at Bird Rock.”

According to CrimeMapping.com, there were two automobiles stolen at the same area on Bird Rock Avenue and Dolphin Place; one on October 10 at 5:45 pm and the other on October 17 at 1:20 pm. Less than a half mile north of Dolphin Place, on the 5900 block of Camino De La Costa, an auto was stolen on October 22; a mile south of Dolphin Place, four cars were stolen by the Tourmaline Surfing Park throughout October.

“We have many thieves [here] that consistently look for crimes of opportunity,” Racheal said. “They case cars and houses on bikes and by foot.”

Madison, a technology consultant and student, used to live in Bird Rock, the southernmost neighborhood in La Jolla; she now lives in northern PB.

“I lived three houses up from where the [SUV that Racheal posted about] was parked in the picture,” she said. “It’s a pretty well-known surf spot and it’s more likely that thieves know that cars will be parked there for longer periods of time. I witnessed four break-ins and know two people who had their car stolen from Dolphin Place. My autistic sister had to stop riding her bike up and down the street because she would witness people breaking into cars and say things to them, and we worried about her safety.”

Madison suggested to the surfers to “never hide their keys around or near the car.” Some surfers are said to lock their cars then stash their electronic key fob by a bush or under a rock because the electronics might get lost or damaged in the sand or surf — but some surfers don’t realize “someone with binoculars could be watching” their every move.

Racheal suggested a combination lock box used by realtors, that can be fastened to a vehicle's tow hook — then stash keys, key fob and credit card and license inside (with larger lock boxes).

A surfer commented on the suggestion, “Soon, the thieves will bring bolt cutters (to cut the combination lock).”

“But at least they still can’t get the key out,” said the surfer’s friend who suggested to get a spare key made (without the electronic fob), lock up the car (which in some cases will still engage the auto alarm), then tie the key in their shorts by utilizing the string embedded in the waistband.

Madison agrees. “Never keep anything in your car that can be visible for someone to see though the windows.”

I did another search on CrimeMapping.com going back to May 7th (furthest I could go back) until October 31, Dolphin Place being the northernmost point, Missouri Street being the southernmost point; and Ingraham Street being the eastern boundary. It showed 58 records of motor vehicle thefts and vehicle break-in/thefts; Sundays showed the most activity followed by Saturdays.

There's a surf spot between Rosarito and Ensenada called [Rauls], about 60 miles south of Bird Rock. Around Halloween, a San Diegan's truck and his buddy's van were broken into while the two were out surfing Rauls; he posted about their experience.

"A man and woman wearing all black stood on the cliff watching us surf while someone else with them broke into our vehicles and stole what they could carry (wetsuit and cellphone)," he said. "This is the third time in two years that [my] truck has been broken into while surfing. They were in a black sedan ..... and [it] had California plates."

Some fobs have a detachable dumb key. Take that with you to the beach, leave the fob in one of the cell phone signal blocking (Faraday) bags in your car.

The whole purpose of a fob with a detachable "dumb" key is so that if your fob won't work, dead battery, for example, you can still access and operate your car with the key. I just leave the fob at home and use the key.