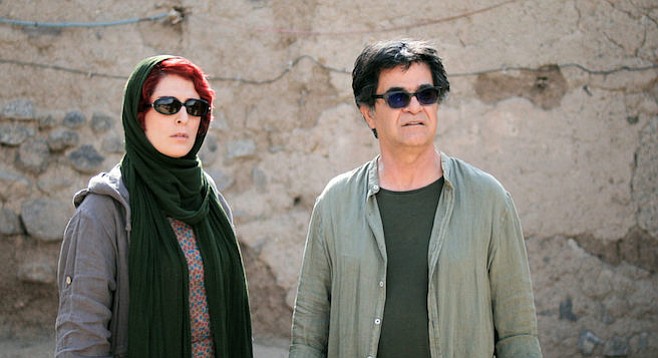 At age 19, the Asian Film Festival shows no sign of slowing down. If anything, this could be the strongest lineup artistic director Brian Hu has assembled in many a year. What follows are a trio of must-sees. For a complete list of films, locations, and events, visit sdaff.org.

In a fit of calculated desperation, a young woman (Marziyeh Rezaei) fires off several electronic cries-for-help to celebrated Iranian actress Behnaz Jafari (playing herself). When her pleas go unanswered, Rezaei construes the rejection as an excuse to document her hanging — in chilling long-take — and implicate Jafari in the process. What follows is an unplanned day trip from Jafar Panahi, the Iranian Taxi driver once again behind the wheel, cast as “Himself,” and this time chauffeuring Jafari along the Turkish border, looking to uncover either a corpse or a selfish prank. When it comes to telling a story with a camera, Neil Armstrong has nothing on Panahi’s exploration of space. This marks the first Panahi film in many where the director — previously placed under house arrest as an enemy of the state — was able to film outside the tight confines of his home and auto. Apart from the convincing cellphone-suicide that opens the picture, this is Panahi’s cheeriest, most upbeat film since Offside. Of late, Panahi’s films do not generally receive commercial bookings in San Diego. Thankfully there’s SDAFF. There are two screenings: Sunday November 11 at 3:45 pm and Tuesday November 13 at 8:30 pm.

Genre-bundling director (and SDAFF mainstay) H.P. Mendoza moved from writing Colma: The Musical to directing the paranormal thriller (I Am Ghost), and now a “there’s no place like home for the holidays” comedy/drama. The recent release of The Oath brought on new contempt for the softball sub-genre. But Mendoza knows better that to endow his characters with only a single easily identifiable trait. And instead of non-stop bickering, Mendoza singles out one character who is so abusive, so void of human dignity, that even his relatives plot a way to permanently keep him from appearing in family photos. Laugh-out-loud funny until darkness sets in to move the narrative in unexpected directions. Screens on Sunday November 11 at 3:35 pm.

Detective Lok (Peter Yu) dreams of a man he never met, a day-laborer at a land reclamation center (Xiaoyi Liu) who is slowly disappearing in his own dreams. An insomniac cop looking to solve a case by walking around the same mud holes as a migrant worker “no one cares is dead or alive” is hardly enough to qualify as a new wrinkle in an old school policer. Still, there’s enough resourcefulness — and expressionistic electric pink fish and rainbow headphones — spearheading this Singapore noir to make the viewer realize there’s more to film culture in the Republic than Crazy Rich Asians. Screens on Friday November 9 at 6:45 pm.