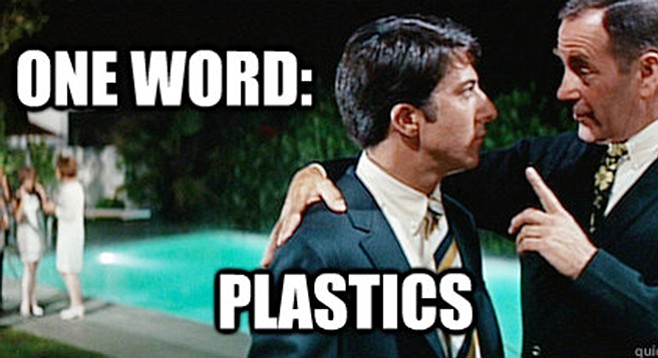 I don’t agree with Corn Dog Guy (or Girl) that hipsters = yuppies. In fact, I’m not even sure there are yuppies anymore. When I think of “yuppies,” I think of a whole generation of young men and women who took Mr. McGuire’s advice in The Graduate and ran with it. They took any opportunity as a good opportunity, and never mind the consequences! Along the way, they earned the scorn of the nation for their selfishness. Nowadays, the universally reviled “get rich quick” set seems composed entirely of tech bros starting useless apps that somehow sell for millions of dollars solely on account of some giant Silicon Valley superfirm’s defensive acquisition strategy. If anyone shouldered the heavy burden of irritating ordinary people through soulless profiteering, it’s them, not hipsters.

I mean, hipsters may be annoyingly smug about their beer drinking habits and refusal to own televisions, but nobody really cares because we don’t get the sense hipsters are preying on anybody, or doing anything and everything to get rich, never mind the consequences. If anything, hipsters irritate us because they are too concerned with the consequences of their actions. They worry too much about not having a TV and too little about not having health insurance. Does that seem like a yuppie thing to do? I don’t see it.

Anyways, last I checked this was “Ask a Hipster,” not “Rant to a Hipster,” so I had to think up a question or else you wouldn’t print my letter. Electric car. Hipster, or not hipster?

So glad you asked, and not only so I can utilize the remainder of your totes on fleek, albeit somewhat ranty, missive. I think you’ll be pleased to find this little conundrum fits right in with the subject matter of your rant. Perhaps you intended that?

Your electric car purchaser usually has two distinct, but not mutually exclusive, goals: (1) reducing his carbon footprint; and (2) signalling his virtue for all the world to see. The former is a quintessentially hipster value. You might think of it as the grown suburbanite’s version of riding a bicycle. The second consideration raises problems from a hipster perspective. As a rule, hipsters tend to signal their virtuous behavior through some sort of humblebrag, such as, “Oh, I didn’t know there was such a thing as Teen Mom 2...I don’t have a TV,” or “Glad you like the coffee...I only buy fair trade.”

By contrast, the average Tesla owner throws a fit if he gets denied a vanity license plate reading “NO SMOG” or something, because how else will people know how much he is saving the world one $80,000 luxury car at a time?

Not hipster. Not hipster at all. That’s really more of a total yuppie bro-down move, like conspicuously calling attention to a Rolex, dropping unprompted hints about how he has a 3-percent share on a yacht moored somewhere in Newport, or ordering bottle service at a nightclub.

As far as I can tell, the only way to really live in both worlds is by purchasing an inexpensive, uncool electric car, like a Chevy Bolt or one of those little Smart cars, and never ever talking about it to anybody unless asked directly. If asked, humblebrag away. Otherwise, remain silent and avoid conspicuous consumption.