Once more from Carlsbad

Trying to recreate the feel of PSA 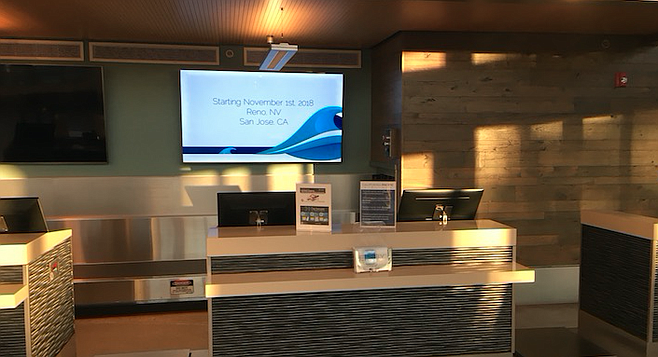 One has to give credit for tenacity to 97-year-old Rancho Santa Fe millionaire Ted Vallas. Since 2013, he’s tried several attempts to get his Carlsbad-based California Pacific Airlines in the air.

After five years of press announcements, and missed timelines for getting “wheels up,” it looked for sure this time. Planned for its maiden flight to San Jose on November 1, the 7 am flight didn’t make it.

Delayed in Denver overnight for a maintenance issue, the passenger terminal was empty at 7 am. The flight was rescheduled to 6 pm. An airport employee familiar with the situation said once the plane arrives in Carlsbad, in the afternoon, the tail flash – the identifying graphic of a commercial airliner’s tail, still needs to be added.

Ryan Divita, spokesperson for the airline, said the ribbon cutting for the airline’s kick off was rescheduled to November 2, when the flight from San Jose returns, around 10 am, with proclamations planned from city and county leaders. The airline will unveil its service to Reno/Tahoe International Airport, scheduled to depart at 10:30 a.m.

According to the company’s website, daily non-refundable flights to San Jose start at $99 one-way. Reno-Tahoe will be served four days a week starting at $149. The airline is scheduled to start service to Mesa/Phoenix and Las Vegas on November 15, with additional routes to Oakland, Sacramento, and Cabo San Lucas, Mexico to be announced.

“These jets fly faster than a 737, and they’re perfect for getting up and down quickly. Even the restrooms are larger than a 757’s,” said COO Paul Hook.

But tenacity, and more money, is what Vallas and his airline will need, based on previous attempts by four other airlines. Since United Airlines pulled out of Carlsbad, JetXSuites, BizAir Shuttle, and Cal Jet, which suspended operations in April, were charter-owned airlines with scheduled commercial service. Surf Air was a concierge-membership airline.

According to Vallas’ studies, Carlsbad has a lot of major corporations within a five-mile radius of McClellan-Palomar Airport. He stated previously the San Jose/Reno destinations were chosen first due to their tech communities.

The issue Vallas has to overcome, which may have plagued the other airlines, is getting known in the travel industry and listed on travel discount sites; Travelocity, Kayak, and Priceline. BizAir Shuttle’s owner burned through two million dollars in two months mostly flying air (empty seats) to and from LAX.

“We’re not a feeder airline,” said Vallas in a previous interview. “We’ll fly people to destinations and then fly them back home.”

Vallas, according to published reports, has spent ten to twelve million dollars of his own money; trying to recreate the feel of the old San Diego-based Pacific Southwest Airlines. Known as “The Smile Airline,” PSA sold out to USAir in 1988.

Vallas originally announced his plan for his airline in 2007. Comparing populations of then San Diego to North County today, “North San Diego County has more population now than when PSA flew,” said Vallas.

Why that airport hasn't managed to get and keep carriers is a mystery. It is most convenient for anyone who lives in No County, and if you have to go to Lindbergh (SAN) it is a long trip and a pain. Yet over the years various airlines have tried to service Carlsbad, and have pulled out. 'Way back when, Golden West used to stop its San Diego to LA service there if anyone wanted to board there or terminate there. An American affiliate was serving Carlsbad in the years before this sweet little terminal building was constructed, and it pulled out.

Surf Air had me scratching my head because it was running in and out of Carlsbad pretty full on every flight, and seemed to have some commuters who depended on it. Yet Surf Air pulled out and left those folks with no alternative. Let's all hope that this time it finally takes hold and stays.

My wife and I might just make a visit to Tahoe so that we can support the service.

The casinos there should offer a discounted flight. Or free for high-rollers.

The casinos do that, although I doubt they do it as much as the adoring press claims.

America West was the most successful in Carlsbad. All flights went to/thru PHX, one of AmWest's hubs for connecting flights within its system. Carlsbad fares were the same as traveling out of San Diego, where most their flights also stopped in PHX. Unlike United Express' run from C'bad to LAX, expensive and sometimes hours waiting for connecting United flights.

If I recall correctly the flights out of Carlsbad never went where people wanted to go. Most business travelers need to go to LA, San Francisco and Sacramento.

I still wonder why there are no flights to Palm Springs.

Probably 'cuz you can drive there in 2 hours? One may fly to PSP if needed, on a 4 hour trip from SAN thru either LAX or SFO on United or Alaska.