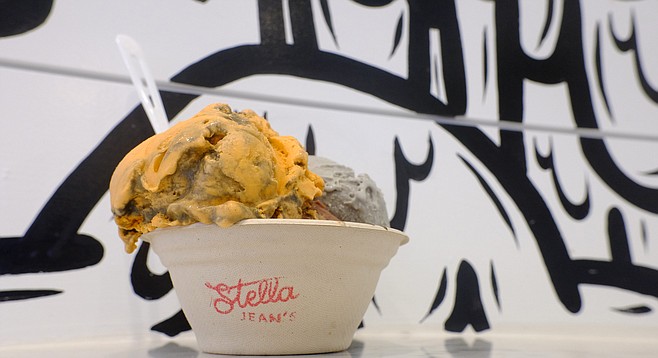 Let’s just call this what it is: a golden era for ice cream in San Diego.

Made from scratch ice cream parlors have been opening up left and right this year, and the latest neighborhood to score one is University Heights. Stella Jean’s Ice Cream shares a wall with sister shop Pop Pie Co., purveyor both of savory pot pies and those of the sweet dessert variety. I suppose this opens the door to eat either type of pie a la mode.

Like Golden Hill’s Mutual Friend and Ans Dry Cleaning in North Park, Stella Jean’s makes its ice cream in small batches in the back of the shop. And like those other shops, it counts a few inventive ice cream flavors to go with standards including Madagascar Vanilla Bean and Double Chocolate. If anything, Stella Jean’s seems to relish pushing the ice cream boundaries a bit further than most.

I should qualify that. As a species, we’re all fairly easy to please when it comes to frozen desserts, but I do believe there are limits. Mine was crossed during a recent trip to Salt & Straw, where I encountered the ice cream flavor Bone Marrow & Smoked Cherries. Even now, I read that and fixate on how great the “smoked cherries” part of it sounds, before I remember how off-putting bone marrow turned out to be in ice cream form.

Stella Jean’s doesn’t push the boundaries as far as that, as these guys seem interested in making adventurous ice cream that doesn’t sound like Halloween satire. Say, Thai Tea with Black Caramel. That’s Thai Iced Tea like you’d get in a restaurant. Though generally made with a black tea base, the addition of condensed milk give Thai iced tea an orange hue, and the ice cream turns out that color, run through with ribbons of black caramel (a.k.a. Vietnamese caramel, cooked longer to achieve smokier flavor and darker color). The unusual yet winsome combination seemed Halloween appropriate and, bonus points, it didn’t contain any plasma.

Another flavor fit the Halloween vibe, perhaps unintentionally. The S’mores ice cream had been made with actual roasted marshmallows, which gave it a ghastly, pale gray hue, kind of a wet cardboard look. It tasted wonderful, and just as perfectly creamy as the other ice creams; it just didn’t turn out as photogenic.

So, if you eat with your eyes, you might notice the occasional misstep in this little shop. But if that’s the price of creativity, I’ll take it in return for interesting tastes.

Like I found in one of several vegan ice creams available. Made with a blend of coconut and cashew milks, the chocolate with spicy pecan ice cream didn’t quite have the dulcet smoothness of the dairy derived flavors, but the hint of coconut playing off the spiced nuts made it worth spending $8.50 to complete a triple scoop (singles go for $4.50, kids scoops for $3.50. Add $1.50 for house-made waffle cone).