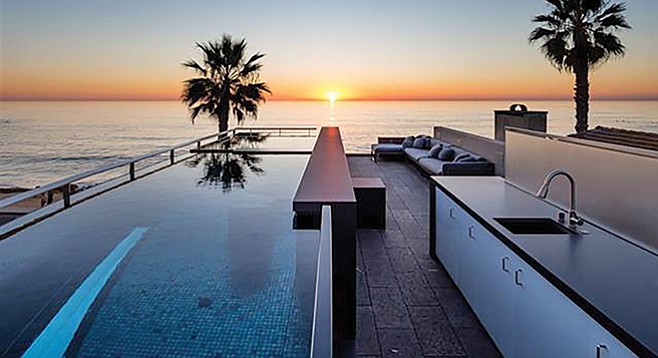 Occupying a prime oceanfront plot in La Jolla’s esteemed Barber Tract is a mansion the owner has dubbed “Marine Lair,” a home the listing promises is “built entirely different than any other home in San Diego.” 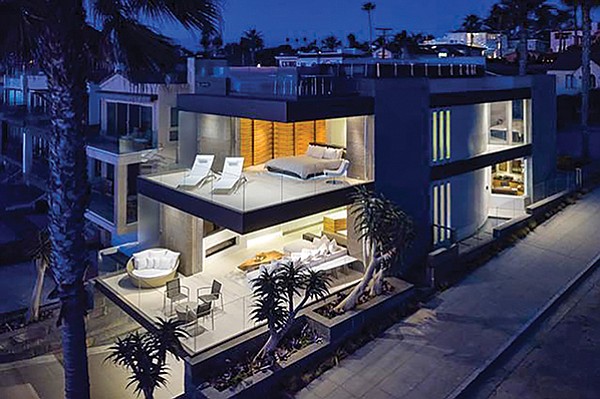 Like camping on the beach without ever leaving home: the indoor-outdoor master bedroom.

“Inspired by the ocean’s elements,” the residence features four bedrooms and five baths spread across 3124 square feet of living space. “Marine Lair is a place where technology and nature beautifully coalesce,” the listing continues, where “technology is sharply contrasted by the rugged materials used throughout the home, each possessing a unique story of its exotic earthly origin.”

Luxury appointments include automated retractable walls of glass in the living room and master bedroom to “instantly transform the inside space to an outdoor environment allowing the salty sea breeze to fill the home,” a temperature-controlled wine room with lighted acrylic shelving to show off one’s collection, garage level “beach bathroom” with steam shower and “rare LED backlit Brazilian vintage granite from Minas Gerais,” and a master bath “separated from the bedroom by a nanotechnology dimming glass which can allow full view of the ocean or complete privacy with the touch of a button.”

A base-lit floating staircase along the curved exterior wall “waves into the home, creating the fluid circulating theme of the interior space.” The home features extensive use of Koa wood from Hawaii, reportedly harvested from a tree that blew down during a storm in Maui.

“Wide steel beams provide support for the specially engineered rooftop pool” with swim-up bar seating and a spa with room for eight. A custom hydraulic driveway and rotating platform in the garage allows even the lowest ground-hugging supercars easy entry and exit, as evidenced by the Ferrari featured in listing photos.

Marine Lair serves as the hideout of Andrew Canter, dubbed “SD’s 29-year-old wunderkind” by the San Diego Union-Tribune in 2014. Canter, a graduate of SDSU’s business school, made his fortune first working on Las Vegas developments for Swiss investors and later, with the advantage of inside connections at Wells Fargo where he was recruited as a part-time investment banker, buying and flipping more than 2000 foreclosed homes during the Great Recession.

Canter later turned to developing new properties, and Marine Lair, originally slated as an investment, turned out to be so appealing that after its completion in 2012, he decided to move in himself. Since then, the listing brags that it’s been featured in publications including The Wall Street Journal, CNN Money, Architectural Digest, Luxe Magazine and Forbes Mexico.

When the property last sold in 2009 for a reported $2.575 million, it was the site of a 1956-built duplex . The property seems to have escaped re-assessment when the new home was built, as it carries a tax value of just over $3.4 million today. Often, by keeping a single wall from a former home intact, owners are able to classify new construction as a home remodel, legally avoiding a tax reassessment as well as a more stringent permitting process that’s especially onerous near the coast.

The home was first listed for sale in late 2017 with an asking price of $11.8 million. After two listings at that price expired, the most recent in late September, it was re-listed with a reduced asking price of $10,500,000 that remains unchanged to date. The seller says he will “entertain offers which include Bitcoin as a form of financing terms.”