Tech, you were my brother, and I loved you

But the future doesn't look bright for us 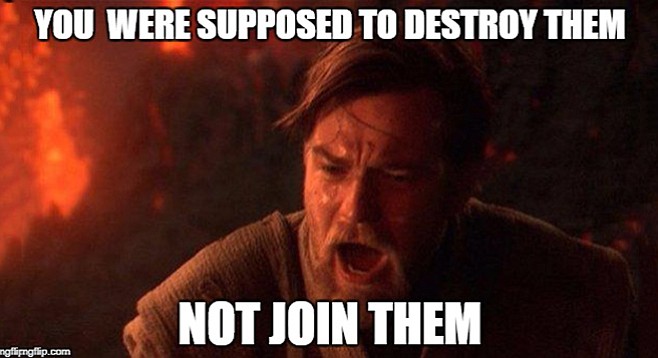 What was your favorite hipster moment during the royal wedding?

Did you hear Yanny or Laurel?

I don’t get what all the fuss is about. Like many people, I heard only a soft voice singing Cat Stevens’s “Morning has Broken” to the tune of Elliot Smith’s “Pictures of Me” in the voice of Steven Tyler from early Aerosmith songs.

What’s one thing we need a word for?

The pain of realizing something you love about the world — like malls or books on paper — is inevitably doomed to obsolescence. I’ll be taking suggestions at [email protected]

Why so hard on Facebook and Silicon Valley the other week? I thought hipsters were all about their iPhones and Instagrams.

The relationship between hipsters and tech, once pure puppy love, is these days getting rocky. In the twenty-aughts, the first iterations of the modern hipster evolved from the emo scene kids of the Y2K era at the same time as the industrial giants of Silicon Valley made their first strides towards future world dominance. It seemed a match made in heaven. The hipsters were doing themselves quite the concern vis-a-vis the intersection of ethos and commerce, with sustainability, fair trade, artisan everything, and buying local being the ways and means of sociocultural revolution. Tech companies wooed the hipsters with whispered sweet nothings about “bringing people together,” and “sharing.” Look no further than Google’s unofficial motto, “Don’t be evil,” for the perfect expression of Silicon Valley’s purported nobility.

But now, Google has officially axed the motto, and we in-the-know types have long suspected they and their tech giant brethren put on the proverbial Black Hat some time ago. Step by step, it seems like Silicon Valley is going all Skynet on us, and there appears to be no going back.

More than anything it feels like a betrayal. This must be how Obi Wan Kenobi felt at the end of Episode III. You were supposed to bring balance to the world, Silicon Valley, not meddle in its affairs for your own dark gains so you could monetize humanity and auction it off to the highest bidder. You could have used your powers for good. You could have made more stuff like Beat Saber — the new VR game where the only objective is to hit floating blocks with a virtual lightsaber in time to heavy dubstep rhythms. I am not kidding, that’s an actual game, and it looks awesome. Instead, we got spyware, data collection, unecological shopping regimes, and TVs that listen to our conversations.

You were my brother, tech, and I loved you, but the future doesn’t look bright for us.