Somewhere between pasta and salad

A humble deli side dish keeps them coming back 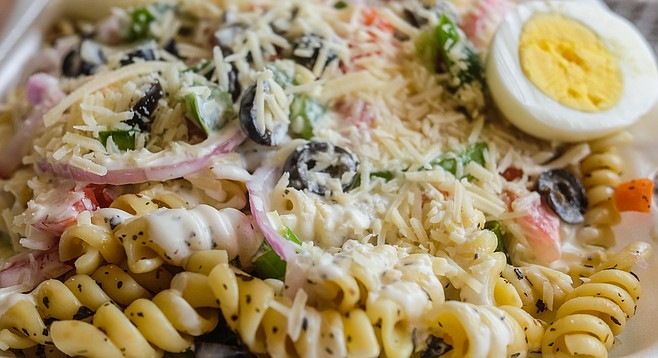 It’s not a dish that typically makes or breaks a restaurant. You won’t find it in competition at the county fair. It’s not the subject of magazine top ten lists, the way pizza is, nor special issues, as burgers and tacos are. You can find entire food festivals dedicated to the likes of poke, chili, and paella, but few in this life ever sing the praises of the humble pasta salad. It just doesn’t inspire that kind of devotion.

Until you find yourself driving past Trolley Stop Deli…. 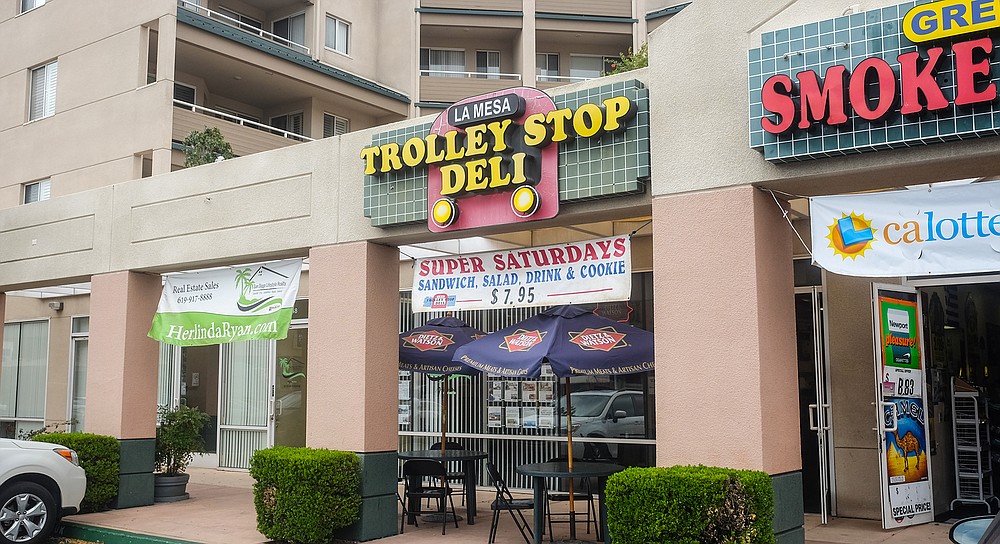 A small sandwich shop near a trolley stop

It’s an independently owned, hole in the wall sandwich shop, close to the trolley stop in La Mesa Village. The sandwiches are good, but not special. Trolley Stop serves the familiar Dietz & Watson brand cold cuts, on a standard assortment of sliced bread. It bakes cookies for its guests. And it’s got the best dang pasta salad in town.

Yes, pasta salad is a variation of cold noodles and salad dressing, and 99-percent of the time it’s going to be the most forgettable thing on any plate. Every time I’ve gone back to Trolley Stop Deli in the fifteen-odd years since I first ate there, I may have ordered a sandwich, but I did so mostly so I would get a side of the pasta salad.

It’s ridiculously simple: fusilli noodles, a light dressing, seasoning, green onions, a little carrot, and parmesan cheese. It definitely helps that it’s grated parmesan, but the key to this pasta salad’s success is the house dressing. They wouldn’t tell me what goes into it, but it’s popular enough that they sometimes sell jars of the stuff. Because, I’m happy to report, I am not the only one who’s fond of this pasta salad.

I orecommend the sandwiches too. Enough so that I’d never once glanced at Trolley Stop’s salad menu before my last visit. So I don’t recall whether the shop has offered a souped-up version of the pasta salad since it opened back in ‘99, or if was added later because people kept coming in to order large helpings of the side dish.

This version starts out exactly the same, but then adds red onions, bell peppers, tomatoes, olives, and hard boiled egg, and serves it over iceberg lettuce. The entrée-sized salad goes for $6.45, with the option to add chicken for $2. That’s probably good, but I didn’t want to make it about the chicken.

Though the added veggies might make it healthier, and somewhat more satisfying, I won’t pretend I liked the full salad better. That would be like saying carrot makes cake better, which we know to be a lie pushed by sugar-free dieters. The pasta salad that hooked me is the stripped down primal bliss of cheese, noodles, and whatever mayo-like concoction Trolley Stop dresses it with. But I’m glad to know I can drop the pretense and stop by, even when I’m not in the mood for a sandwich.