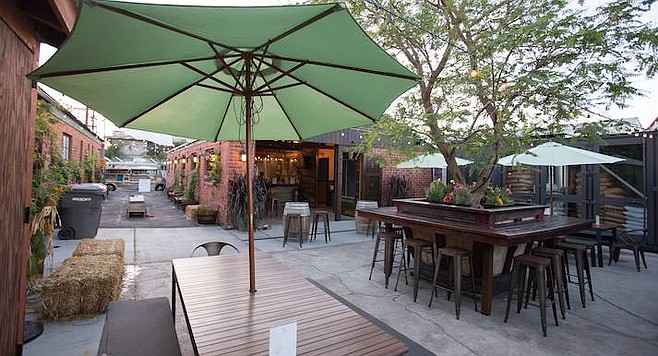 Eppig Brewing Waterfront Biergarten 2817 Dickens Street, Shelter Island A beer garden on America’s Cup Harbor is the San Diego amenity we didn’t realize we needed until Eppig Brewing started pouring beer in a Shelter Island taproom this spring. You’ll find most of its seating outdoors, including shaded tables overlooking boats in the marina, between restaurants Point Loma Seafoods and Brigantine. Eppig suggests leaving your car in the parking lot of the latter; I recommend taking an uber home. The exceptional and refreshing German-inspired lagers served here were made to be quaffed outdoors, and you won’t want to leave without enjoying an IPA.

Viewpoint Brewing Co. 2201 San Dieguito Drive, Del Mar If you like to drink beer before, after, or between visits to Del Mar’s fairgrounds and race track, do so with a view of the San Dieguito Lagoon. This open air brewpub, situated across the lagoon from these summer venues, serves food and house beer designed to pair well. This will be Viewpoint's first full summer open, and it’s likely to be a lively hang on fair or race days. But make a note to visit on a quiet afternoon to enjoy its natural setting; Viewpoint doubles as a start or finishing point for hiking on the coast to crest trail.

Nickel Beer Co. 1485 Hollow Glen Road, Julian When the heat starts to stifle at sea level, head up to Julian and make this homey brewery a part of your apple pie excursion. The beer company’s namesake, Tom Nickel, has done more to advance the cause of San Diego beer than salted pretzels, as a brewer, pub-owner, and festival organizer. These days, the world’s best small batch brewer of 2004 pours beers at elevation, and its rustic patio makes it easy to appreciate fresh beer and fresh mountain air.

Belching Beaver Tavern & Grill 302 East Broadway, Vista This brewpub wing of the Belching Beaver family brings a rustic beer garden vibe to Vista Village, with a patio bar serving a verdant space loaded with Adirondack chairs encircling fire pits. A place to kick back and grab shade in the daytime or for gathering friends around a fire to sip the Beaver’s IPAs on a cool summer night.

Helix Brewing Co. 8101 Commercial Street, La Mesa It’s amazing what lumber, red brick, and a green thumb can accomplish. This young brewery sits in the middle of La Mesa’s small industrial zone, but has used these elements to construct a secluded patio comfortable and social enough for long summer evenings catching up with old friends or making new ones. Depending on which day of the week, you may find food trucks and/or live music at Helix Brewing; you will always find crisp, seasonable beers.