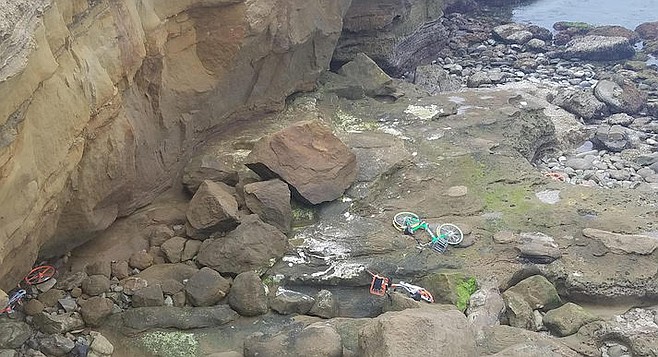 On May 21, Paul Proctor pulled up four dockless bikes that were strewn off the Ocean Beach cliffs into the waters. 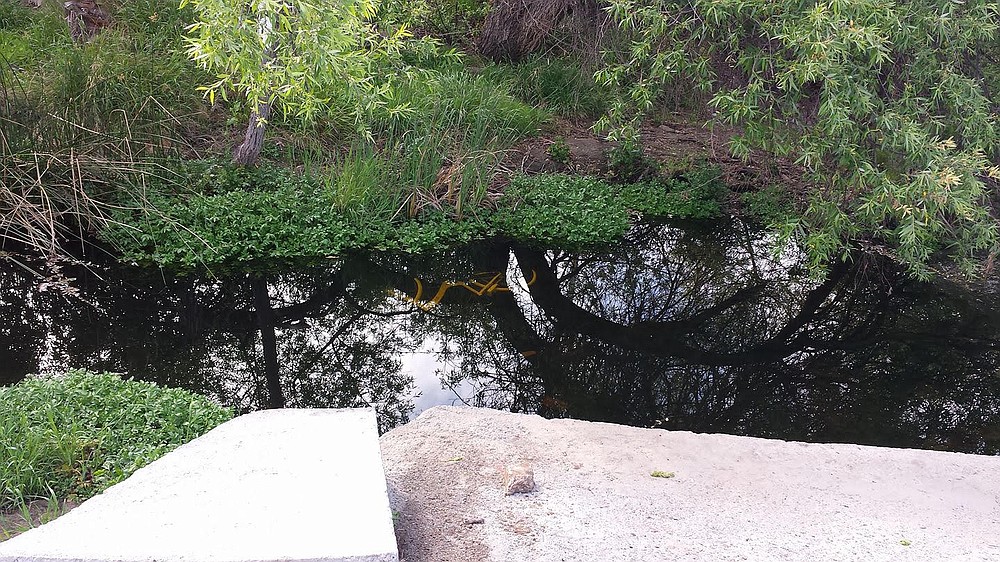 “That’s a reef shelf at Sunset Cliffs and Hill Street,” Proctor said. “The area the bikes were in is inaccessible without a waist deep wade around one of the points of the coastline from the south end of No Surf Beach.” 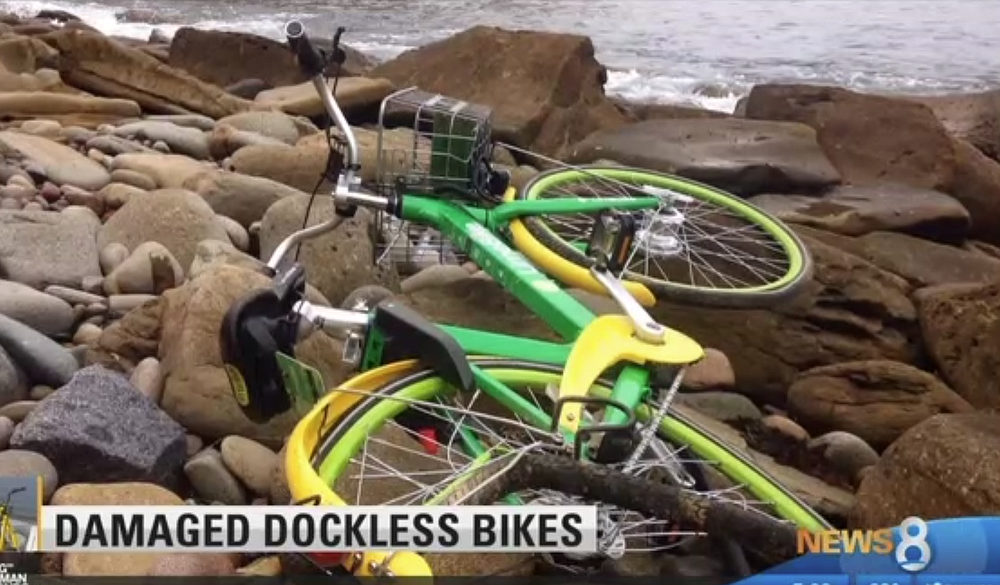 Proctor is a 32-year-old college student, who like his OB neighbors, is tired of seeing dockless/share bikes by their surf. 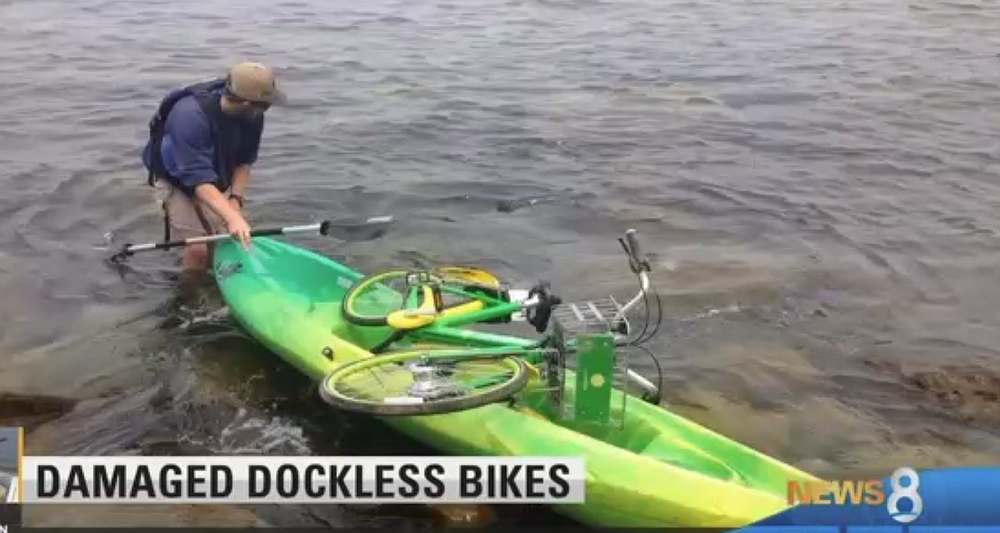 “I have very heavy duty ratchet straps with metal hooks on the end,” he said. “I got lucky when I encountered Shawn because he was already down near the bikes looking for sea glass within the rocks. Shawn hooked the end of my straps to the bikes and I pulled the bikes up the cliff.” 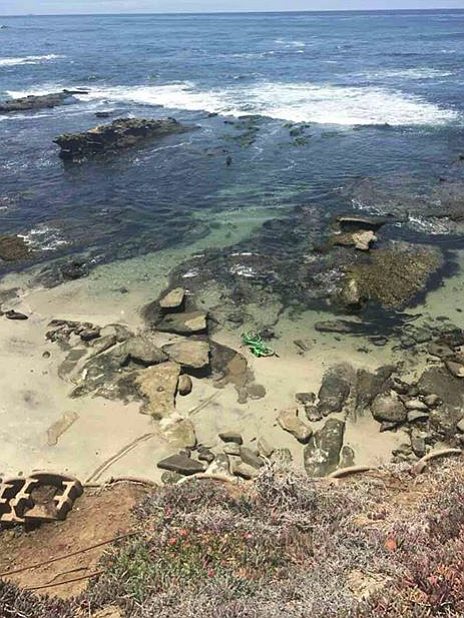 Paloma Aguirre Bacalski: "The benefits of dockless bikes, at least in IB, outweigh the impact of one or two bikes finding their way into the water."

Proctor found an additional two bikes later in the day, which weren’t working because the water and the impact when thrown down the cliffs, messed up the bikes’ ability to power up and transmit a signal. When functional, the dockless bikes can be rented and unlocked, by utilizing a smartphone app and between $1 and $2 via credit card. 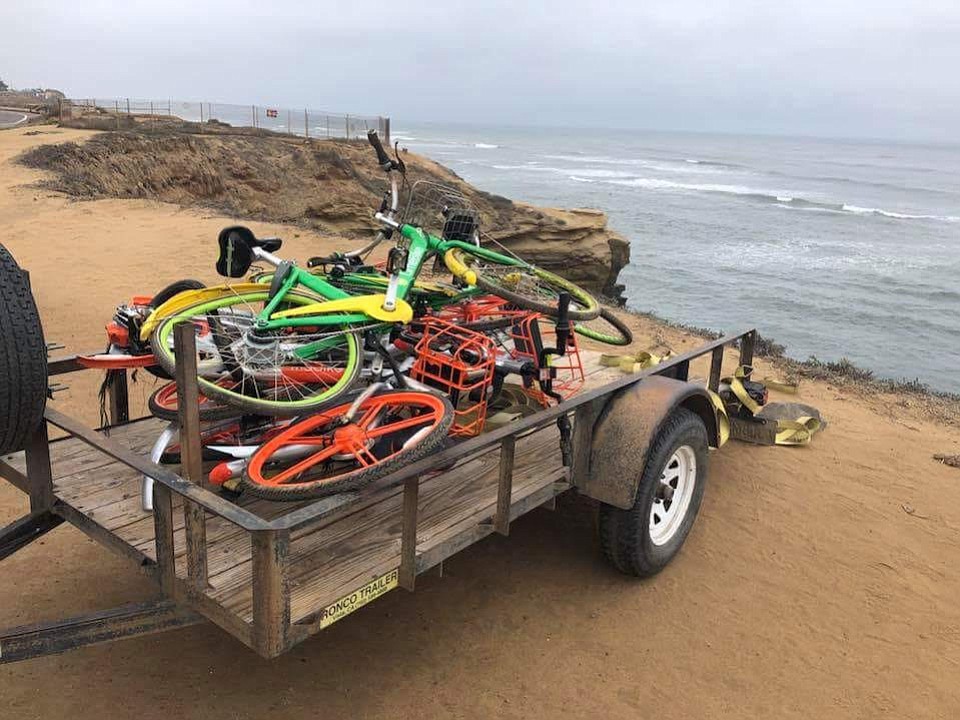 Paul Proctor: “I have very heavy duty ratchet straps with metal hooks on the end.”

About 14 miles to the east, Linda Pennington found a “non-native” ofo bike and what appeared to be remnants of a LimeBike submerged in Chollas Creek by Chollas Parkway North and Mina Street.

“We are already removing litter, furniture, abandoned homeless stuff and grocery carts from our creeks and canyons,” she said, “and now dockless bikes too.”

In the last year-or-so, Pennington and her San Diego Canyonlands team, pulled out 8.3 metric tons of trash from their canyons, creeks, and muddy-puddles — including bikes and bike parts.

Last month, CBS News 8 reported a LimeBike lying on the rocks below a La Jolla cliff, they then depicted a man that rescued another LimeBike on his kayak.

“There was one that was thrown off the Imperial Beach pier,” said Collin McMahon (a San Diego LimeBike representative) in a different CBS News 8 interview. “Fortunately, it was in shallow water and we were able to retrieve it.”

Paloma Aguirre Bacalski is running for the City of Imperial Beach City Council and boogie-boards around the same pier.

“The health, economic, social and environmental benefits of dockless bikes, at least in IB,” she said, “outweigh the impact of one or two bikes finding their way into the water.

“LimeBike gave a presentation to IB City council a couple of months ago and reported that 50 percent of rides started or ended within 50 meters of a bus stop. 7,000 ride shares = 7,000 lbs. of CO2 saved, and up to that point, IB residents had collectively burned 400,000 calories.”

About nine miles north from the IB Pier, the City of Coronado is not as welcoming to the colorful bikes. In March, the city began to impound the bikes and charge the companies $45 per unit. On May 24, there were about 250 share bikes cited for being left out and many were next to the water. Janine Zuñiga, from the city of Coronado, couldn’t confirm that any were immersed inside the water, she did although confirm that “right now in our public service yard, we have 41 LimeBikes and two Mobikes — which is a decrease from a couple of weeks ago.”

Proctor doesn’t charge the companies to return the dockless bikes on the streets, yet.

“I have reached out to Mobike about where to return the four damaged bikes with five emails, and I have not received any response back.

“I was able to visit a LimeBike station in Barrio Logan. They expressed some anger that the bikes had been damaged but they also confirmed that their street-team will not go down to retrieve bikes thrown off the cliffs or any other location where the bikes are not directly accessible, like underwater.”

I appreciate the efforts of private citizens to clean the environment especially when other citizens have caused it. Every city that allows these nuisance bikes to exists on public property must also develop and enforce a fine/fee schedule for these companies. The general public and taxpayers should not be responsible for the cost of the pollution caused by a for profit company, especially when it’s a programs we don’t really need. As with any venture there are always unintended consequences. As we see many of our own citizens cause these problems and if caught they should suffer the criminal consequences. But as a citizen who does not use this service, nor approves of bicycles just being parked or abandoned in the public right-of-way, I don’t want my tax dollars paying to clean up their mess while they profit.

When I had to write my essay on environmental issues I understood we are poisoning our planet...the only planet we have to sustain our species. This is incredibly stupid.

Plastic in the oceans and the food chain, mercury in our coastal waters and fisheries, acid rain, hydrocarbons in food and water, nicotinoids killing bees that we need to pollinate, of course all the greenhouse gas emissions cooking us slowly to death...

Giant patches of swirling garbage in every ocean, larger than most countries. Rapidly accelerating species loss. Ocean acidification and the death of coral reefs. The melting of permafrost and the associated release of trapped methane. On, and on, and on...we are killing ourselves.

How does this work out? Went and did not reach? Where did the bicycle fit in? Did they leave it there? It is not ready enough, that the person litter air, water with industrial wastes, so we will clog up the abandoned vehicles? As a teacher likes to say my teacher - in the compare and contrast essay what does compare mean ...

Thank you Paul! As for the dockless bikes they will soon disappear from the landscape. It costs $1 an hour to ride. Based on the number parked-in-the-middle-of-nowhere and the number of damaged, stripped and destroyed bikes I have seen this business model is doomed. Just another great idea that did not work.

Maybe it is working. Are they really in business to rent bikes, or is it something else? When the bikes are rented, they know much about who is renting them, and where they are riding. One of the other comment makers says they are mining for data about consumer behavior, trip patterns, and all sorts of other things.

If they are just renting the bikes and hoping for a profit from that, no, it isn't working. But it could be tweaked to make it profitable. A good place to start would be to charge more for an hour of riding.

I think the people that invested ( were duped into it) will take a big hit in the lime bike plan.

As of Last October, LimeBike had raised $62 million from investors. Ofo has raised nearly $1.3 billion since it was founded in 2014 and Mobike has raised $928 million since 2015. Dockless bikes are not going away anytime soon.

Are 3-wheel bikes the next transportation idea? The disabled and seniors could use something cheap, but it has to be safe to ride. There's NO way I would ever ride a 2-wheeled vehicle. Too dangerous.

Hi Visduh. I've mentioned the data mining angle before here and here. And again, this article is the best summary of what's going on and who's profiting from it. [Hint: the dockless bike companies are all Chinese owned or majority invested.]

If it failing as fast as I think it is, then it wasn’t such a great idea, was it. Then again, with all the money raised by those who initiated these companies, they’re laughing all the way to the bank.

Perhaps you could enlighten us as to why you think it is "failing" fast.

I read an article on a bike website that said the dockless bike companies [like so many businesses now] are into collecting customer data. And that's part of their business plans.

These bikes are also made, and the company financed by China.