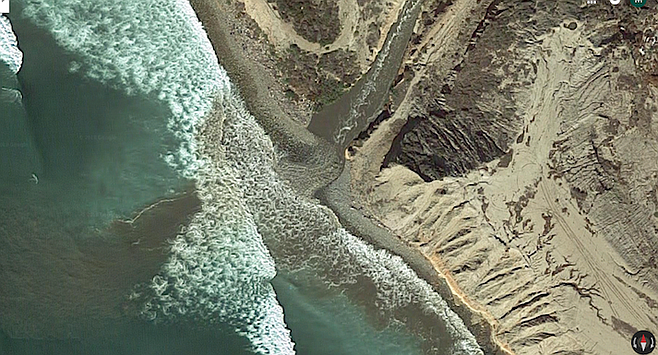 A video of slightly treated sewage flowing like a waterfall from a southwestern Tijuana treatment plant as it arrives at the beach at Punta Bandera has gone viral, with more than a half million views – and more than a thousand comments about where the sewage ends up. 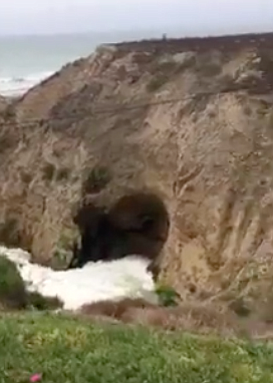 “People in Mexico care about this extreme environment degradation,” says Paloma Aguirre, Coastal and Marine Director for Wildcoast, an environmental group that works on clean water and ocean conservation on both sides of the U.S. Mexico border. “This is nothing new, but whenever there’s a south swell, it ends up in Imperial Beach.”

Comments on the video shot by Arnoldo Astorga include outrage at the government for allowing harm to the ocean and environment, as well as some that indicate local residents went to see for themselves and were disgusted. Astorga responded to comments saying that people must call on their government to stop dumping sewage on the beaches.

Beaches from the border to north Imperial Beach were under a county Department of Health advisory for the second day Thursday.

County spokesman Gig Conaughton provided a written statement indicating the county is testing the water after receiving reports from locals.

“You smell it and know instantly what it was,” an IB lifeguard said.

Aguirre said she also caught wind of it and headed to Mexico to see it again firsthand.

Wildcoast has been saying for years that the sewage plant where this ‘waterfall’ originated is overwhelmed and barely maintained. Water officials who toured the San Antonio de Los Buenos treatment plant in 2016 found that just three of the 150 aerators were functional.

David Gibson, executive officer of the San Diego Regional Water Quality Board said that what surprised him in the video was the local reaction.

The never-ending onslaught of sewage from Mexico has only recently garnered a commitment from CESPT (Tijuana's commission for public services) for $4.3 million of sewage treatment upgrades. Many on the U.S. side of the border have long felt Tijuana lacks the political will to fix the plant.

“The Punta Bandera treatment plant is well over capacity and CESPT hasn’t committed to upgrades,” Aguirre said. “The exceedance is so consistent and constant that three beaches adjacent to the plant are permanently closed.”

Last year, the Tijuana commission announced a plan that would commit hundreds of millions to upgrading sewage handling, from replacing broken or old pipes to upgrades at the Punta Bandera plant. It’s not clear if the money was ever allocated.

Calls and emails to CESPT’s public affairs office garnered no response over a two-day period.

Wildcoast Executive Director Serge Dedina, mayor of Imperial Beach, has led South Bay cities and the Port of San Diego in suing the International Boundary and Water Commission and the Environmental Protection Agency over the spills on land from the San Ysidro Port of Entry to the ocean.

It's a sh!tty problem.

Are Mexican sewage flows a greater danger to our homeland beaches then North Korea? Mexico will pay for the border wall, someone said, but not the sewage dump. Thousands of spoken words, written expose' and great overhead shots on the random brown spills but never is it mentioned how much México saves by opening the valves that pours the shit on our shores. Iran never dumped sewage on our waters. Its' time to make Mexico pay a tax for their instant sewage rivers that is greater then what they save. Close the border.