A new place to dim sum

Come early to Mira Mesa but not too early 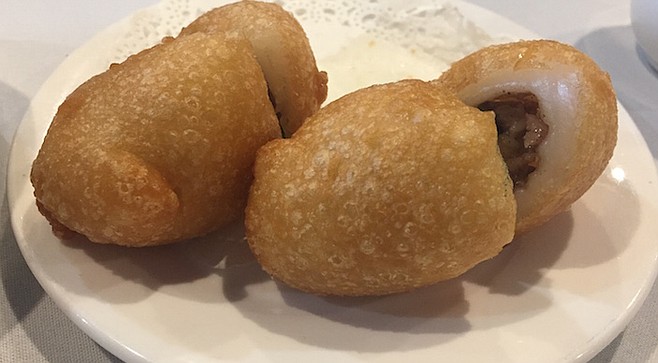 It wasn’t until I entered Fung Fung Yuen that I realized I’d never set foot in a dim sum restaurant that was this new. The carpet was spotless, there were no nicks on the back of any of the newly upholstered chairs, and not one scratch in any of the paint on the walls.

The other thing that set this place apart from its peers in town was service—fast, attentive, and friendly. On occasion, servers would come by to ensure we were enjoying ourselves and not waiting too long for any one item. We were on the early side, and there was not a cart to be seen, so we did have to order dim sum plates and ask after certain items, which were delivered to us straight from the kitchen. There was one exception to Fung Fung Yuen’s friendliness once the crowd rolled in and more carts rolled out: when we looked over and decided to forego the options from one cart, the woman pushing it let out an exaggerated groan and sigh. 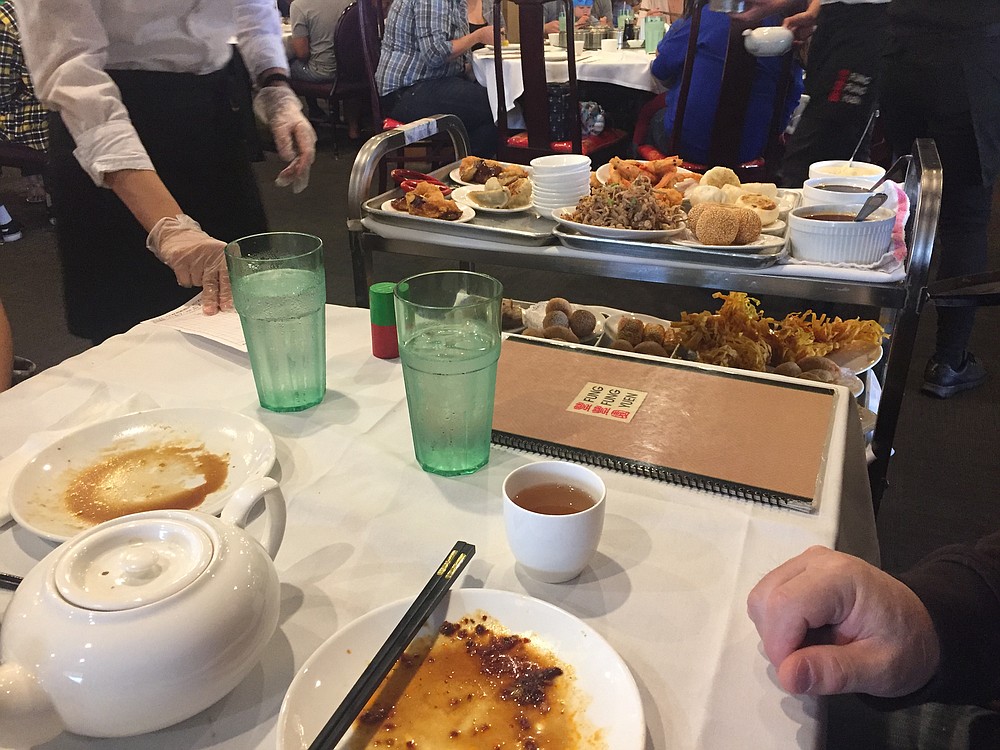 We were nearly finished with our meal when most of the carts started coming out.

Most of the fare was what you’d expect: Shrimp Har Gow, savory meat rice rolls, and Hom Sui Gok, commonly known as “footballs.” The food was hot and tasted fresh, and the footballs were still crispy on the outside from the fryer. David said the crackle of the outer crust and the depth of flavor of the filling make these fried, meat-filled rice-dough balls his favorite version in San Diego. It’s hard to tell how much of this "fresh off the stove" effect was because we were on the early side. 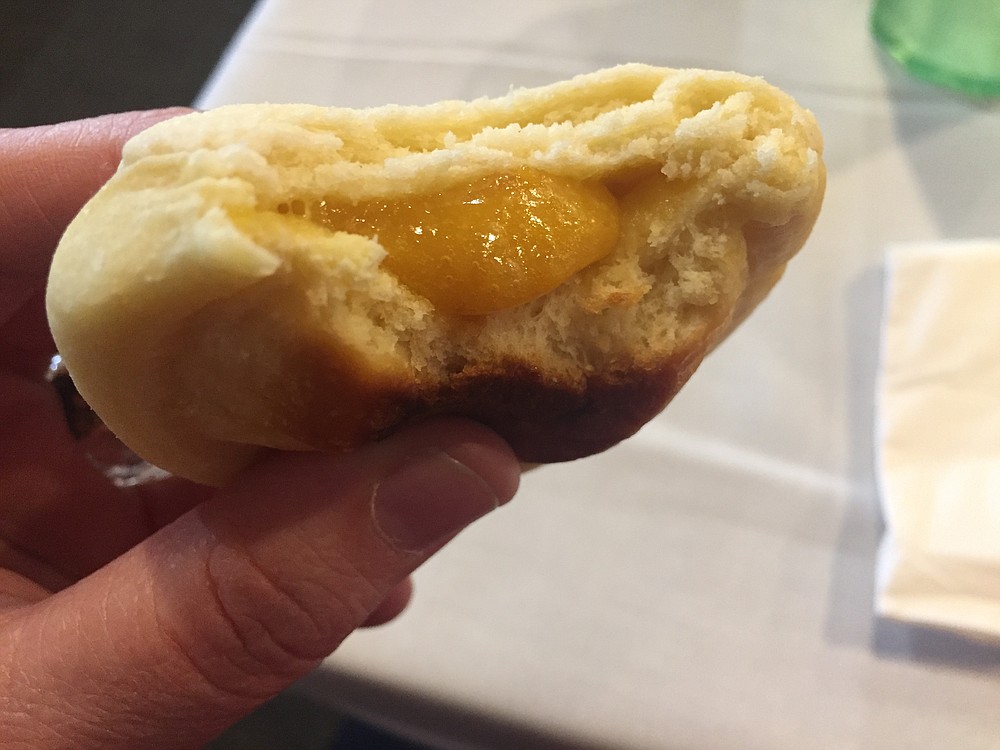 These hot and fresh Egg Yolk Buns were a hit at my table.

There was one dish that I’ve not had anywhere else, and that was a dessert plate, the Creamy Egg Yolk Bun. Unassuming on the outside, this semi-sweet dough was filled with sweet, hot, runny custard that made everyone at the table slightly gasp in delight upon discovering. There were four of us, and only three on the plate, so we ordered another dish. 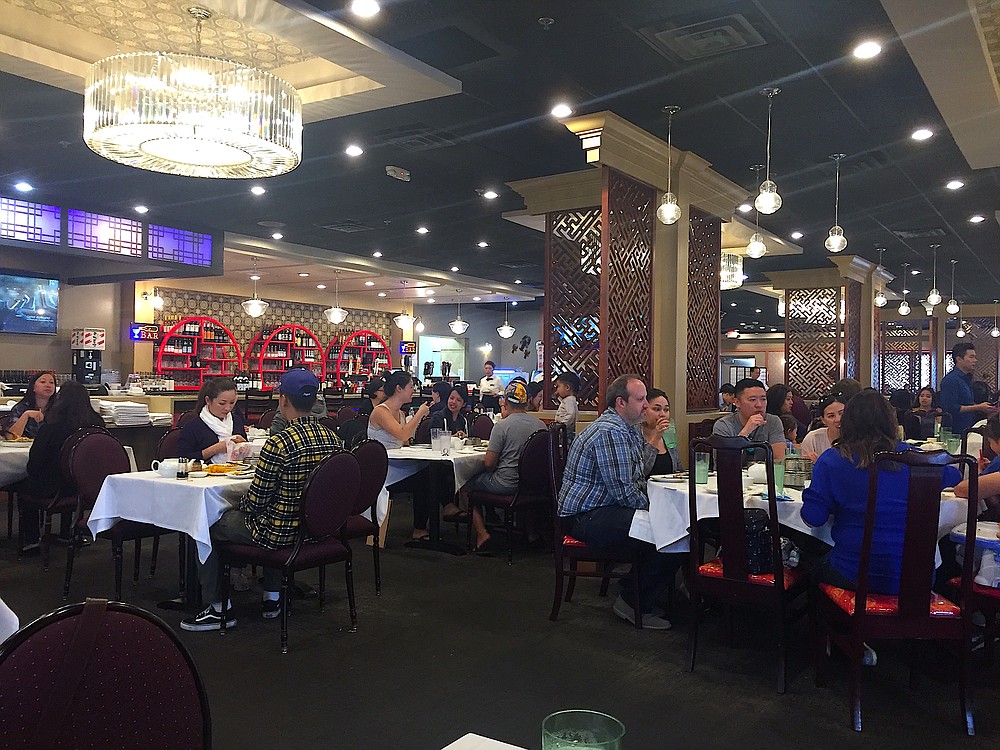 Interior of Fung Fung Yuen, in a renovated space that was once a Hometown Buffet.

When we first arrived (shortly after 10am on a Saturday), the place was mostly empty and there were no carts in sight, hence our ordering with the servers who came to check on us. But by the time we left (around noon), half a dozen carts were making the rounds and there was a line out the door.

Next time, we’re aiming to arrive around 11 to get seated quickly and catch the first flood of fresh carts. I’m also curious to order off the Specialties Menu, as we spotted several giant, colorful plates filled with lobster, noodles, duck, and crab.