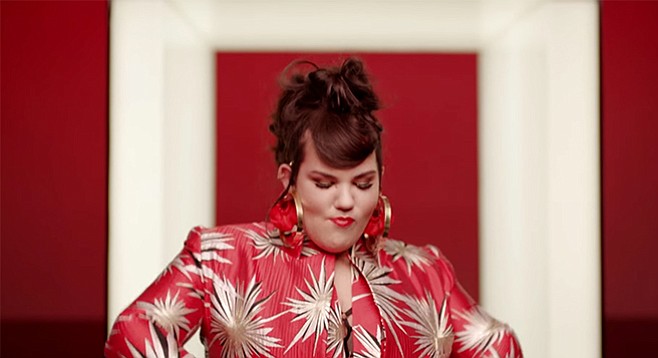 I have no opinion on the chicken song, but I sort of wonder, why doesn’t the US have something like the Eurovision Song Contest?

Beats the heck outta me. I would love to see Alabama’s contribution to a 50-state feel-good pop song throwdown. California could kick in the occasional gangsta rap-surf-punk-norteño fusion number. As for, say, Montana, I can’t even... songs about buffalo? Whatever it is, I would eagerly tune in every year to see what kind of weirdness the several states produced. Of course, by “tune in” I mean “watch the recaps and read the angry online think pieces,” but that’s close enough for rock ‘n’ roll. Therein lies the problem. Anything a hipster like me would giggle over with ironic delight is virtually guaranteed to land far afield of mainstream American sensibilities.

It seems like just last week the sun was below the horizon before I got out of work, but already the daylight stretches on late enough for me to catch a sunset patio drink even after a full day in the office. For my part, the arrival of the long days of summer is cause for celebration. I like the warmth, the endless sunlight, the beach days, the cookouts and yard parties, and pretty much anything there is to like about summer. On the other hand, I like the cool of winter (no need to pay for air conditioning but you still get to gloat at the rest of the icy cold world), the substantial reduction in tourism, the improved surf, and the chance to catch up on much needed rest during the cool evenings with their early sunsets. Now, I idly wonder whether any particular season is the most hipster season, the “coolest” season, if you will. Enlighten us.

In a very general sense, most hipsters consider themselves above the plebeian changing of the seasons. At the very least, they dislike them all equally. Summer too hot, winter too cold, spring too springy, et cetera. Further, very few traditionally hipster pastimes and activities rely on any particular season. One can, for example, drink gallons of hoppy IPA in March just as well as December. Non-hipster stuff, on the other hand, can be very season-dependent, like how pumpkin spice lattes are only available in the fall, or how those sleepaway camps for adults are kind of a summer phenomenon.

As an aside, in case anyone thought “summer camp for grownups” sounds like a hipster thing to do, it totally isn’t, at least not in practice. The adult summer camp scene usually involves lots of dance music, flip-cup games, and guys named “Bryson” with tribal tattoos. It’s basic bro central.

The only real hipster consideration vis-a-vis the seasons is, when are there fewer tourists around? Hipsters take great pleasure in achieving status as “locals,” whatever that means in 2018, when it seems like everybody lives everywhere, and the only thing locals agree on is how annoying tourists and other non-locals are. Thus, gathering with other hipsters to bemoan the ingress of tourists during the hot tourism season fills hipsters with a sense of smug superiority that almost looks like happiness if you kind of squint your eyes and shake your head back and forth.