Before it was just part of Encinitas 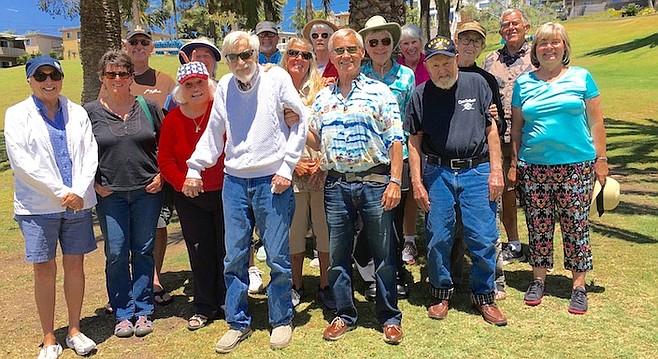 In the 1970s and early 80s, they were the movers and shakers in Cardiff by the Sea. “Now we’re just creakers and crawlers,” joked Meg Kleeb.

A group of 16 longtime Cardiff residents met in Glen Park on May 17 to reminisce of the days before Encinitas cityhood.

Attorney Bob Macfarlane was the lawyer for the volunteer Cardiff Town Council. He remembers driving down Coast Highway 101 at 5:00 a.m. and seeing a sign company replacing a storm damaged billboard in the San Elijo Lagoon.

Macfarlane said once a billboard in or near the lagoon came down, county regulations required it to be removed. He served the construction crew with a cease and desist letter, and the billboard was never repaired. (None of the billboards exist today.)

Linda Laws got involved in the Cardiff Town Council when the chamber of commerce was pushing the idea of turning the San Elijo Lagoon, then mostly a smelly slew, into a yacht marina.

Macfarlane worked on the town council’s voter referendum in 1984. It stopped the city of Escondido from pumping its raw sewage down to a proposed 10-million-gallon-per-day facility to be built next to the lagoon. It forced the city to build its plant in Escondido, and pipe only its treated water down to the Cardiff outfall.

Marion Mullins was the first woman elected to the Cardiff school board. As a school parent she ran because none of the board members had kids in the schools, and school superintendent Ed Kaufahl did not welcome parent involvement.

Jane Schmauss was Mullins’ campaign manager. “It was clear they didn’t want females on the board,” said Schmauss. After Mullin’s overwhelming election, “Kaufahl resigned the next day,” said Mullins.

Schmauss went on to open George’s restaurant on Coast Highway. With its hanging displays of collectable surfboards, it the start of the California Surf Museum, which Schmauss co-founded later.

Linda Berry McLean Lux remembered in 1977 when Cardiff started hosting We Love Cardiff Days with a parade, street dance, and a town picnic.

Actually 3 in photo were Cardiff School Board members, 2 more in our group ran and lost, and most in the pic helped candidates in their campaigns. SADLY 3 members of our group are deceased: Cindy Townsend, V Ann Cornelius and John Kleeb who all significally contributed to Cardiff's evolution.

Both of us forgot Jennifer's husband, the late John Smith, who also was a board member.