Halibut are biting in 20 to 60 feet of water 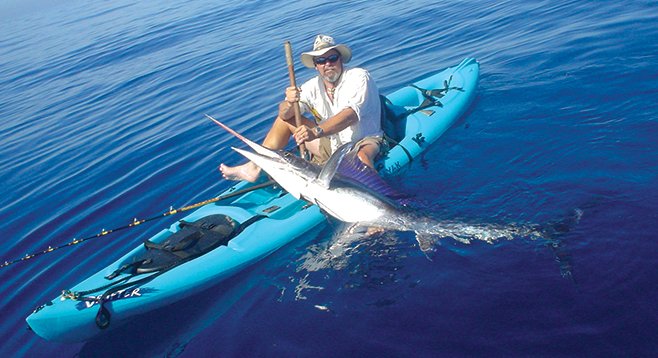 Saltwater: Boats are picking away at the bluefin tuna and yellowtail within overnight range and though the bite has been sluggish, the signs are positive for the season ahead. The number of fish caught doesn’t always equal the potential, and the bluefin tuna especially can be tough to get into the hold once hooked. Back inside, sardine, mackerel and staging grunion are plentiful, and yellowtail action feeding on the surface off the kelp edge have resulted in nice catches for the kayakers and boaters off La Jolla and Point Loma. Calico bass have been biting on the kelp edge, and in a decent size; one out of every six caught being at least 14 inches. A few spots of barracuda and bonito have shown up on the bait, and those counts should increase.

White seabass have been victims of a well-placed bait or lure this week, though I am sure the spookier fish will show better when the seas allow more kayakers out through the surf. The fifteen in the party boat counts were shorts and mostly from Oceanside, though several fish have been caught by private boaters and kayakers, mainly off La Jolla. Though it has been blown up enough to keep a good part of the plastic fleet ashore, when the bait is thick and the yellowtail and seabass show, those that have gone out have had their chances at larger gamefish.

Halibut are biting along the reefs in the sandier areas in 20 to 60 feet of water, and up to the surf line on the weeks during the grunion runs. This is the time of year when catching a legal ‘but from shore while surf fishing is most possible. Try early mornings after the peak grunion run; the tide will be low by then and coming up. You want to fish the cuts and holes that are reachable while the tide is at the bottom, and then work behind the breaking waves as the tide rises through the morning. Another option is to fish directly behind the grunion at night during the run. For the best results, try a live bait on a Carolina rig, or lures that best mimic grunion; clear/green swimbaits, Krokadile-type spoons, or crankbaits in flashy, blue/green colors.