Silence at our table as we ate dessert 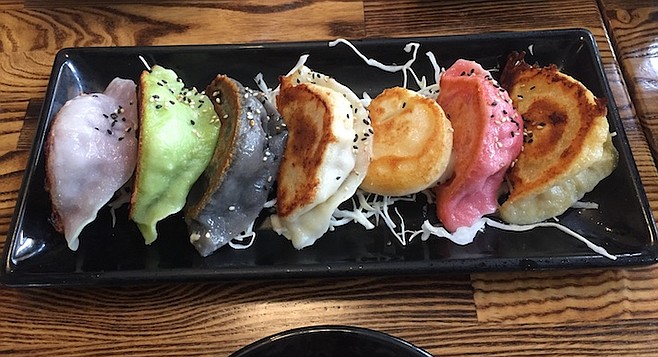 I love the name of this restaurant: "Steamy Piggy" is adorable and appalling. How dare they use an endearment such as “piggy” to describe the food I’m about to eat? On an instinctive, American level, it feels akin to a beef-centric restaurant called Barbecue Bessie.

Actually, that would be a rad name for a beef-brisket joint—remember you heard it here first. It was a photo on Instagram—of a plate of dumplings all the colors of the rainbow—that lured me into Steamy Piggy. 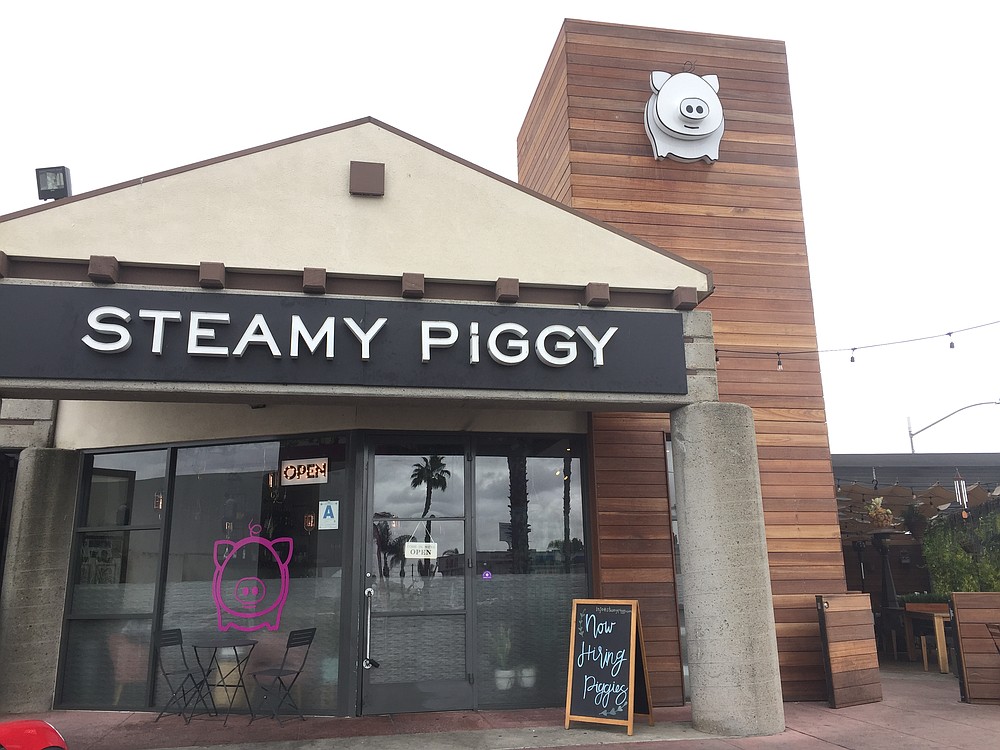 Exterior of Steamy Piggy on Convoy

Unlike other Asian restaurants on Convoy, Steamy Piggy has a modern flair, from the plant-filled patio that offers a green oasis from the industrial neighborhood to the fuzzy green piggy logo on a pink wall, which begs to be a selfie backdrop. But decor is not one's draw to the Convoy District—we go there for the Asian food offerings, and Steamy Piggy is an addition to my Convoy repertoire, notably for their Xiao Long Bao, or soup dumplings ($10). 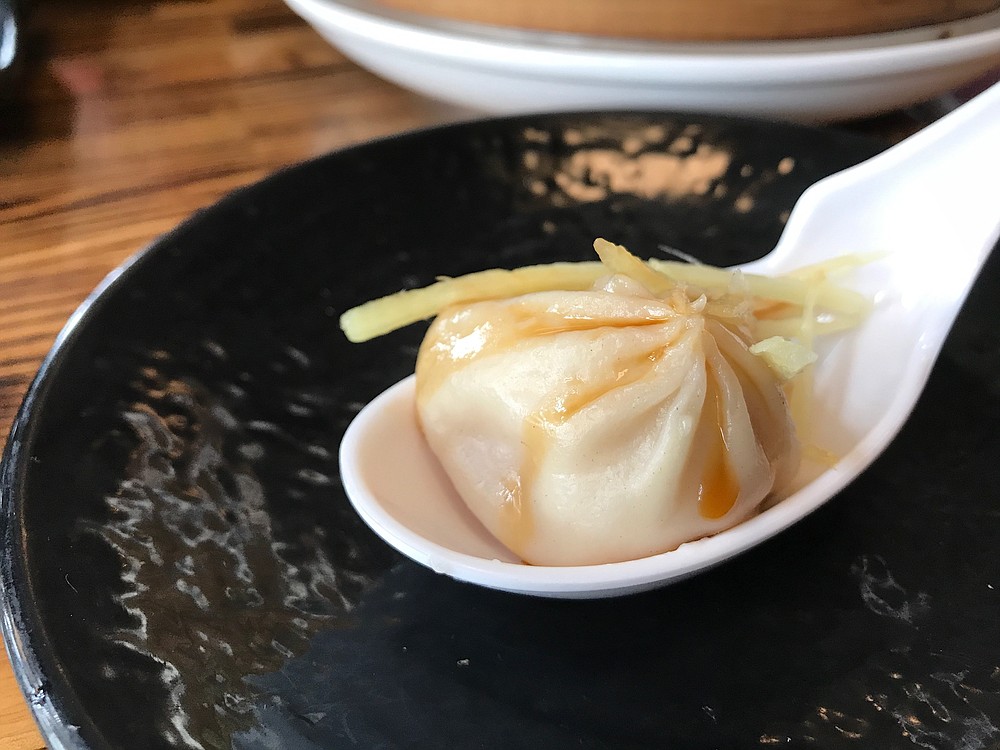 Xiao Long Bao on a spoon with fresh ginger

These pork- and broth-filled dumplings are a favorite of David’s at dim sum restaurants, where they almost always come in tiny, individual tins. Here, they’re made fresh to order, and I could taste the difference. We were supplied spoons and fixings (fresh ginger, soy, and vinegar). 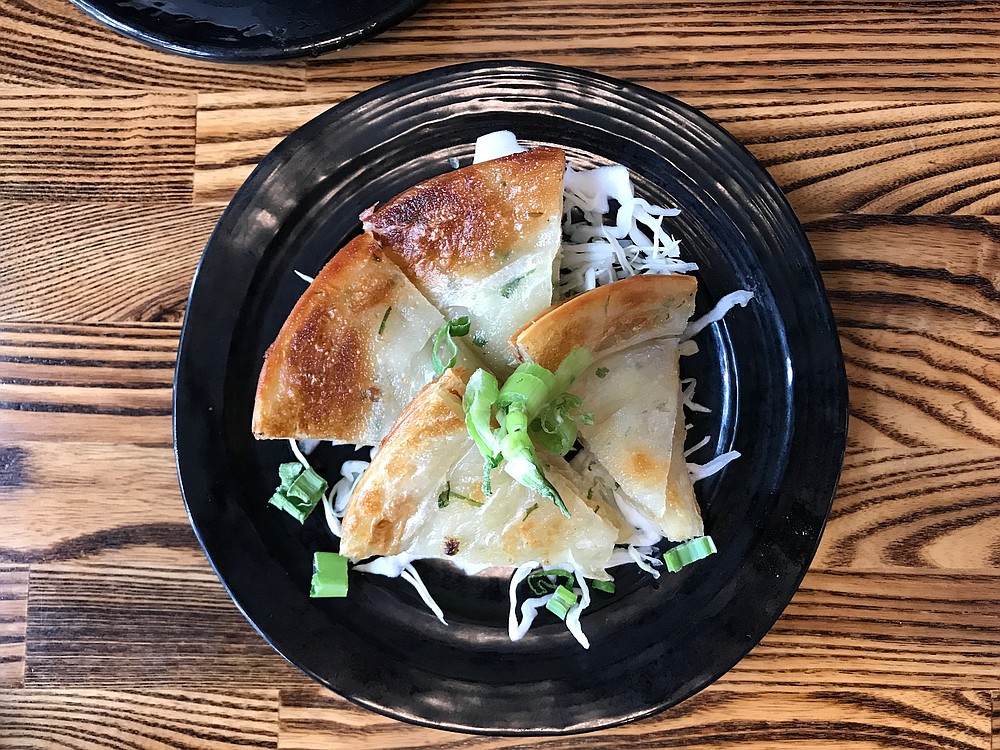 Though the proper way to eat soup dumplings is to dip them in the soy/vinegar mix, place on the spoon, poke to let the broth out onto the spoon, add some fresh ginger and go to town, I like to just pop the dumpling on my tongue, bite down, and allow the savory hot broth to explode in my mouth. David put his on the spoon with fresh ginger, but similarly prefers to consume the dumpling with the juice still intact. These are now my favorite Xiao Long Bao in the San Diego area. 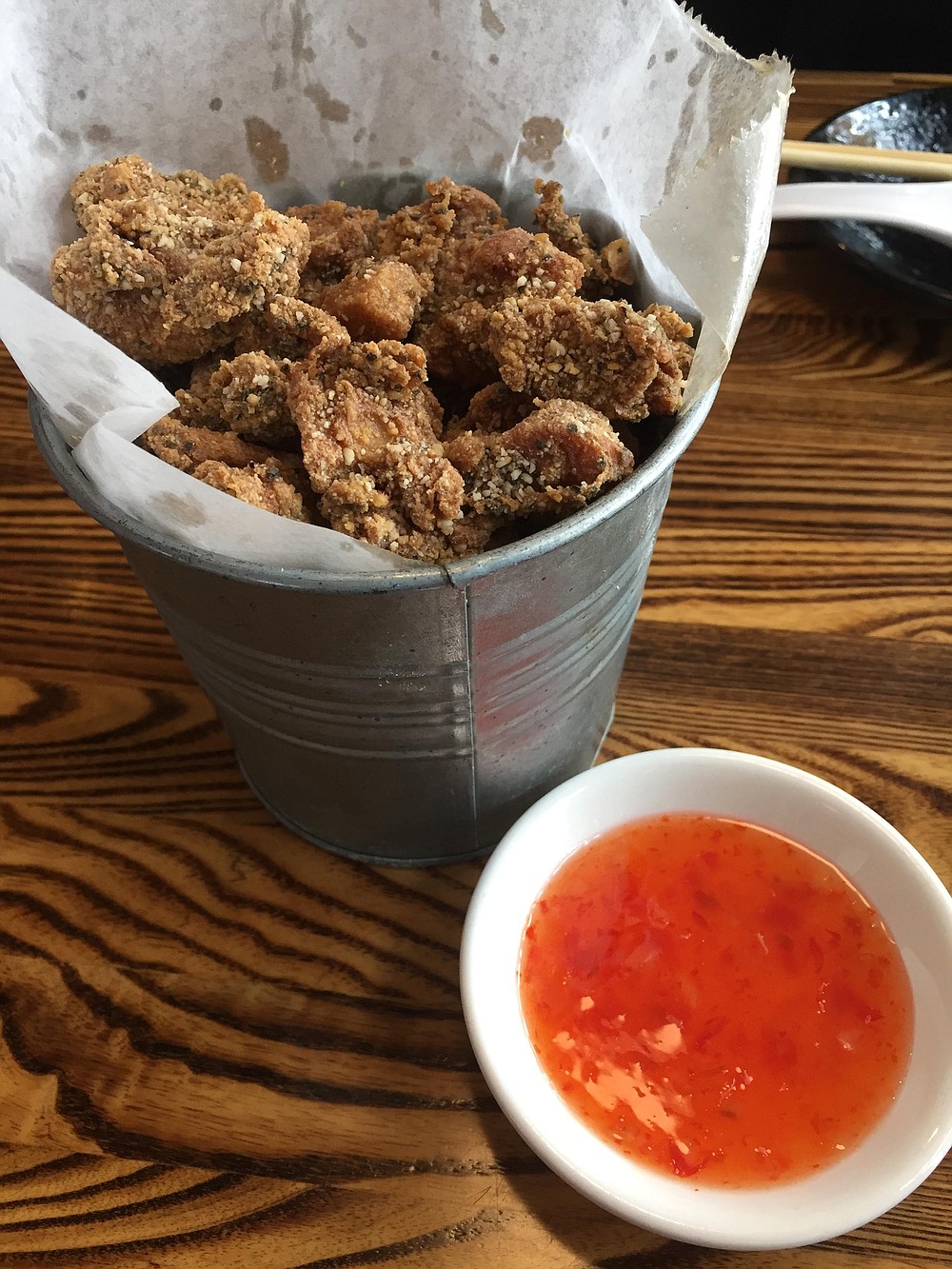 Salt and pepper chicken, a generous serving of a not-so-exciting appetizer

Once I’d set a baseline with this dumpling, it was time to try the colorful dumplings ($9.50). No food coloring is used—the vivid green, purple, orange, black, and pink colors come straight from the fresh ingredients, such as spinach, carrot, and beet. The seven varieties on the sampler are: chives, shrimp, curry chicken, egg and cheese, burger, veggie, and cabbage. My favorite were the curry chicken and burger, which is made with beef and onion, and gets its black color from squid ink. David’s two favorites were the shrimp and chives, though he also liked the curry chicken. The dumpling wrap was thick and chewy, and each filling was fresh and savory. Satisfying for sure, but not as moan-worthy as those Xiao Long Bao.

We got two small plates for $5 each. These were recommended by the staff. It’s worth noting that from the moment we arrived, our three servers (one of whom I believe was the owner) were friendly, attentive and delightful, and regularly checking in. When prompted, the woman I believe to be one of the owners was eager to share her philosophy of freshness and quality, though she says she will never capture the depth of the flavors to be found in Shanghai.

The housemade scallion pancake was particularly toothsome, with a crisped exterior and a chewy, salty and semi-sweet dough. The salt and pepper chicken, was my one disappointment in this meal. It was a generous portion (an entire, filled all-the-way-to-the-bottom bucket), but instead of the crisp and crunch I expected, there was a powdery texture to the coating on the chicken thigh chunks. I already had my eyes on a curious dessert, so it was just as well that I didn’t want second bite of the chicken.

The dessert, also $5, was Nutella and banana dumplings. One bite and hot liquid Nutella oozed out of the dumpling and down our chins. To my left, a family of four was having the same issue, and we shared a laugh. Lesson learned, we flipped them over so the crispy, pan-seared side would be on the bottom, the soft, delicate bit of the dumpling on top. Potential mess aside, there was a silence at both tables as these silky and luxurious bites were enjoyed.

Barbarella, how could you steer me so wrong? On the recommendation of your review, my gf and I went to Steamy Piggy (which I almost spelled as Seamy Piggy!). We got the Rainbow Dumplings, Shrimp Dumplings, Pork Belly Bun, Soup Dumplings and flat noodles. What a disappointment! Dumplings were tough, with tough little balls of filling that were nowhere near big enough to touch the dumpling walls. . . no dipping sauce, either. Soup dumplings were of a nice texture, but only enjoyable if you like Greasy Pork flavor broth (no other discernable flavor inside). Noodles were good, pork bun was not as advertised -- no spicy mayo. At the end of our meal, three separate servers came over and asked us if we wanted boxes for all the food we didn't eat. No, if it wasn't good enough to eat at the restaurant, I'm sure it's not going to get any better sitting in my refrigerator.

Additionally, the floors, especially going out to the patio, were black with filth and the bathroom doors dirty as well.

I'm trying to expand my roster of enjoyable restaurants, and I WANT new go-to's, so I REALLY hope I can rely upon your reviews going forward. Thanks for your energetic writing, I do like reading you.