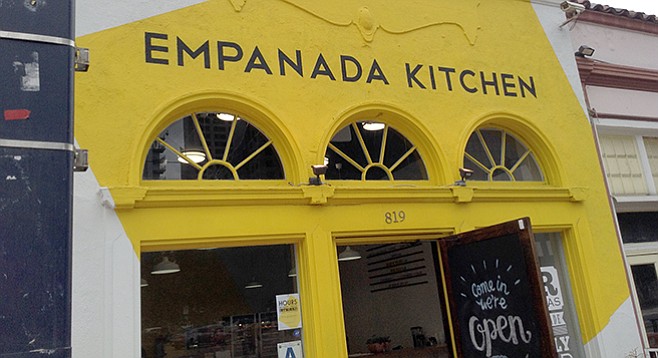 “All the Argentinian children thought I was Brazilian,” says Brandon, “because I was black, and they’d never seen a black American before. They all wanted to take pictures with me.”

Brandon, his buddy Matt, and Matias are talking Buenos Aires. That’s where Matias is from. Now he’s opened his empanada place right here on C. 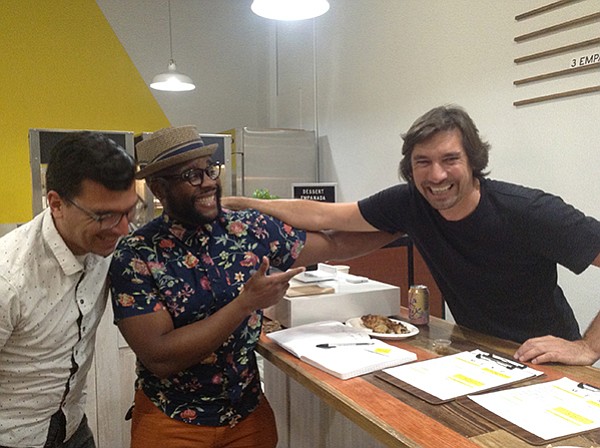 “Argentinian empanadas are not well-known here in California,” he says. “We think the potential of empanadas is great.”

This is around 7:30 on a Friday night. I’m curious, because my friend Carlos, who was born in Argentina, told me he’d heard about a new place “where they do empanadas right.”

So right past the renovated Churchill Hotel, I see that what used to be that Brazilian place, Samba, now has an arty, off-kilter panel of yellow paint and a new name. “Empanada Kitchen.”

I’d always confused Brazilian and Argentinian food anyway. You just generally think of gauchos carving off shanks of meat with swords from a rotating side of beef. So I have to come in, see what it is an empanada place actually does.

And sure enough, all they do, besides a salad of the day, is empanadas. It’s beautifully simple. Every empanada is $3.50, and they have a choice of around ten this evening. “They’re basically pastry, bread — pan — wrapped around meat or vegetables,” says Matias. “And because we are from Argentina, by far most people ask for the beef. We are famous for our beef.”

Today, they have the beef empanada (“not ideal for vegetarians,” warns the menu), a ham-and-cheese (“only two ingredients,” warns the menu), ratatouille (roasted veggies, onion, red bell pepper, eggplant, zucchini, tomato, garlic. “This one is vegan,” warns the menu). The chicken is sautéed in a garlicky base (“Be careful. It’s very juicy”). 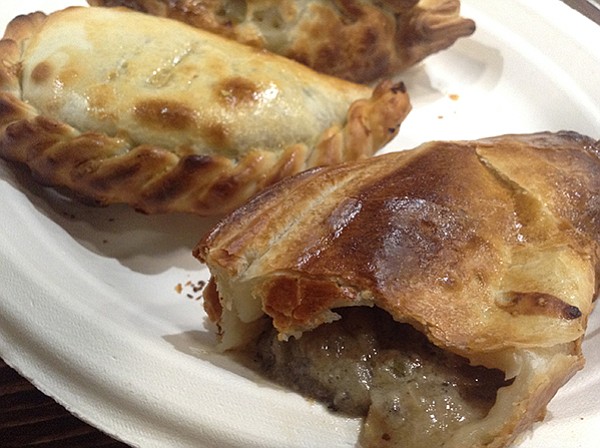 So one thing you know: Argentinians, who have a kind of haughty reputation, (think tango), have a sense of humor. The sweet corn, basil, and mozzarella in a béchamel sauce empanada sounds delicious, and so does the sautéed mushrooms and goat cheese. They have a Caprese (basil, tomato, mozzarella), a bacon-and-egg for breakfast. And then lamb, which Matias promises has been braised for 24 hours in onions, rosemary, carrots, and red wine (“It’s a lot of work. That’s why it’s a little bit more expensive, $4.50,” says the menu).

I leave the guys to reminisce about Tigre, place just outside of Buenos Aires, while I stew over which empanadas to pick. Matias says three should be enough. He hands me a card. “Which is which,” it says, and shows that each empanada is wrapped in a different-shaped pastry shell. Beef’s half round, ham and cheese is circular, the veggie-ratatouille has spiral piping at the top. On and on.

“That’s so you know what you’re picking up,” says Matias.

D’agh, looking at all the beautifully shaped li’l pastries.

“You should try the Caprese,” says Matt. “I love that one. It’s like a tiny pizza.”

Hmm. Lamb is a must. “It tastes exactly like the lamb they eat in Patagonia,” Matias says. And mushroom and goat cheese sounds kinda interesting, and because, hey, Argentina, gotta have a beef one. Tiny Caprese pizza next time.

Now I notice a little card that says “chimichurri.”

“What’s that about?” I ask Matias.

“Well the truth is, chimichurri is a genuine Argentinian sauce, but real Argentinians don’t dip their empanadas. Also, they don’t like spicy-hot foods. We’re not very adventurous when it comes to exotic spices. With our famous beef, we put salt on it. That’s it. We have chimichurri, but it’s not spicy hot, and we never put it on empanadas. Only on sandwiches and steaks, sometimes. I make it mainly for American customers, because they’re used to salsas and dipping sauces from their Mexican experience. I have Argentinian customers who look at me like ‘Are you crazy?!’ when I suggest putting chimichurri on my empanadas. But now I have the habit of dipping my beef empanada, always.” 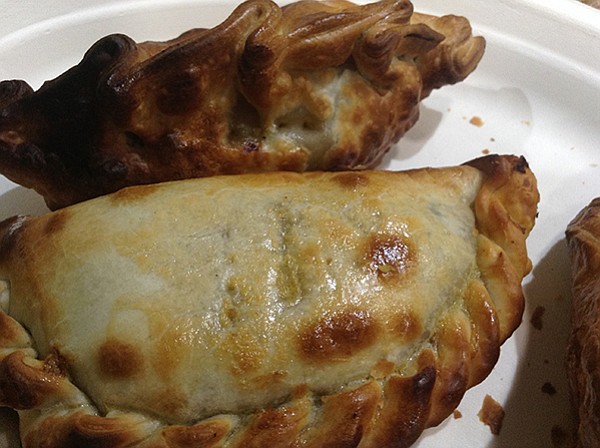 Beef empanada — the most popular of all

So hey. Now I’ve got to try it. Matias hands me my three hot baked empanadas (“we only fry them for appetizers. Never when they’re for a main dish”) and a little pot of the brown chimichurri. Chomp the end off my beef empanada. Ooh. Solid but tender pastry. Chunks of beef steaming inside. But el momento de la verdad comes when I dip this sucker. The sauce is beautiful. Sharpish, though not too spicy, and rich. Even a little winey. And it and the beef love each other.

“I make it with parsley, oregano, some chili flakes,” says Matias, “and of course garlic, olive oil, and red wine vinegar.”

The rest of my chomping session is a chimichurri swirl.

“What does that mean?” I ask Matias, “chimichurri?”

“Well the story goes it’s not even an Argentinian word,” he says. “They say that at the end of the 19th century, when British engineers came to Argentina to build our railroads, they wanted more flavor in their foods. So, they’d yell out ‘Give me curry! Give me curry!’”

Seems the British engineers had already been building railroads in India and had gotten used to the strong flavors there.

“So, the Argentinian cooks created this sauce, just for the British, and the name for it became ‘gimmecurry!,’ and that became ‘chimichurri!’”

Wow. That is just crazy enough that it could be true. They also say that empanadas were born in Moorish Spain, when their Arab overlords brought samosas from Moghul India. And out of that transfer came Italian calzones, Cornish pasties, apple turnovers, a form beloved everywhere. 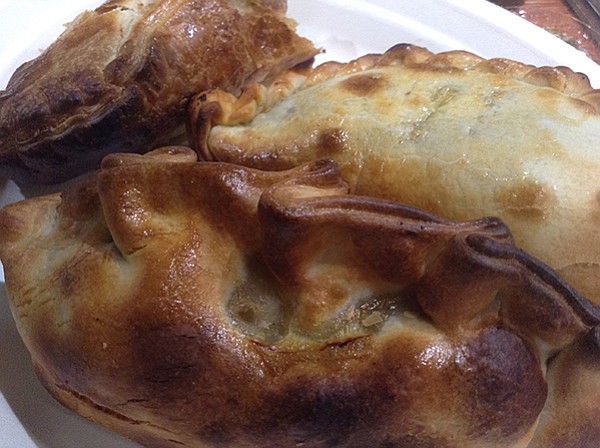 The lamb is full of rosemary flavor, and the goat cheese kicks up the mushroom flavors, but modestly, in an Argentinian way.

Matias says he can make an apple crumble dessert empanada, but I say, “Next time.” Like an empanada, I am stuffed.

Prices: All empanadas $3.50, except the lamb ($4.50); choice of beef; ham and cheese; ratatouille; chicken; sweet corn, basil, and mozzarella in a béchamel sauce; sautéed mushrooms and goat cheese; caprese (basil, tomato, mozzarella), bacon and egg (breakfast only); lamb, among others; dessert empanadas include apple crumble

Wikipedia says otherwise: The name of the sauce probably comes from Basque tximitxurri ([t͡ʃimiˌt͡ʃuri], approximately chee-mee-CHOO-ree), loosely translated as "a mixture of several things in no particular order"; many Basques settled in Argentina in the 19th century.