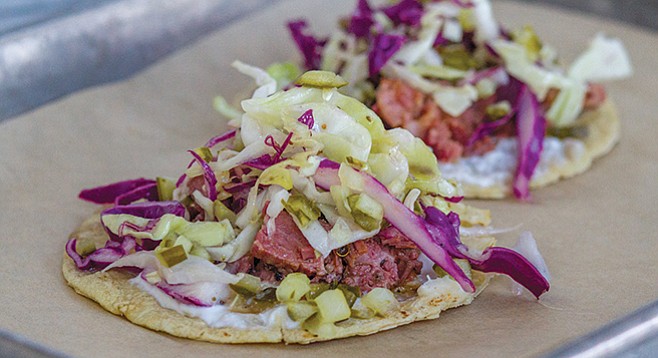 One of downtown’s newest restaurants, El Chingon is definitely trying to mark itself as edgy. Case in point: The Trump-hinting “Making Mexican Great Again” banner over the bar. I disagree with banner — when has Mexican food not been great? — but I can’t argue with the fact that El Chingon makes high quality tacos. The al pastor taco with marinated pork shoulder and grilled pineapple is simultaneously sweet and spicy, while the classic fish taco tastes like it was just pulled out of the Gulf of California. For an extra kick, upgrade the tacos by having the filling topped with fried cheese.

This unpretentious restaurant specializes in seafood, not Mexican, but does serve two styles of seafood tacos ­— grilled and fried — and it does it very well. The grilled tacos come with a choice of mahi mahi, shrimp or the catch of the day and are topped with grilled pineapple and tangy kimchi. The batter used for the fried fish, shrimp, or calamari taco is slightly spicy and brings out the flavor of the fish nicely. And, yes, there is lots of beer on the menu at Beerfish (and, if you’re lucky, Gilligan’s Island reruns on the restaurant TVs.)

CARVE is more of a daytime deli catering to local businesses and residents than a full-blown restaurant, but it smokes its own pastrami. Even better: It puts that cured meat on tacos topped with cabbage and Russian dressing. It sounds like it wouldn’t work. Trust me: it works beautifully, proving once again that a tortilla is the perfect canvas. Besides making its own pastrami, CARVE makes its own potato chips and its own soda. That makes diners like me very happy. (See full review of CARVE this Friday on Reader website.) 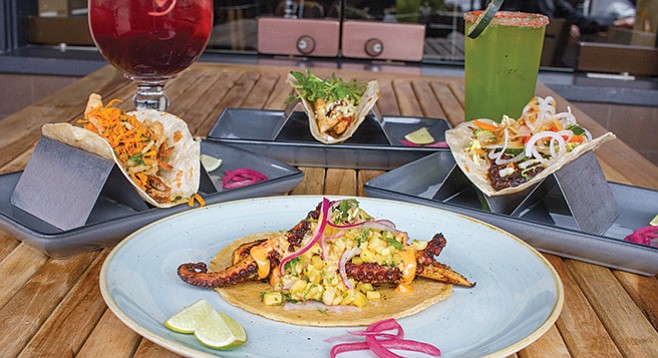 Gaslamp’s newest Mexican restaurant can seem a little pricey if you’re not used to the downtown upcharge, but the quality is high — especially the carne asada taco, which seems inspired more by Korea than, say, Cabo. The chile-rubbed octopus is also on my crave list thanks to its combo of spicy mayo and tangy pineapple and tender octopus. The Spicy Hacienda margarita is a nice cocktail for food, but the Mezcal-enhanced Smoking Jacket” is a perfect after dinner drink.

This upscale-but-still-casual restaurant doesn’t specialize in Mexican food, but the braised beef cheek tacos on the appetizer menu are worth a double order. Tender and juicy with lots of umami, this taco trio is meant to be a starter dish, but don’t be surprised if you order extra — they’re that good. The Smoke Signals cocktail with Mezcal and citrus is a nice accompaniment.

Not a Mexican restaurant but it’s hard to top the quality of the cod in their classic fish taco: nice and fresh ­ you can taste the sea. No need to cover it up with salsa (though do so if you choose). It’s a stretch, but if you want to call one of their tangy Bao buns an “Asian taco,” they are definitely worth pairing up. Make sure you ask the bar to make a Fernet con Coca, a cocktail made with tequila, Fernet Branca, and Mexican Coca-Cola — the perfect drink.