And the winner is...

The most hipster thing ever! 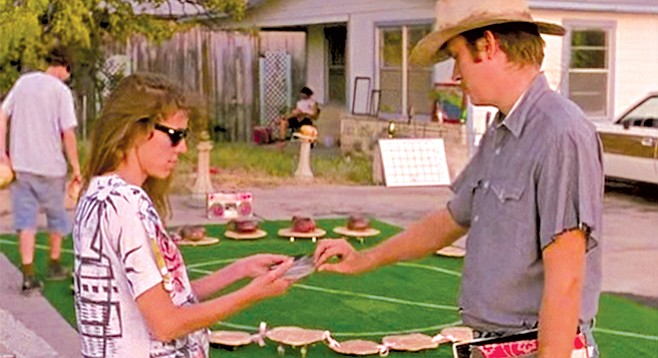 I guess this is it. Number one. The hipsterest thing of all. We began this journey by learning about some music that probably shouldn’t have happened, but we’re all kind of glad it did. Then, I told you all you need to know about a guy who got famous for pretending he was famous for other reasons. There was the guy who wrote that one poem and basically summoned a counterculture out of nowhere. And then, last week, I told you all about ironic sketch comedy and urban lumberjacks before either was cool. Now, I worry we peaked somewhere in the past four weeks. I sat up long nights pondering the mysteries of the hipsterverse, trying to figure if there was anything more hipster than what we’ve already covered.

Then it hit me. Like Mark Ruffalo spoiling Infinity War nearly a year before it came out, I spilled the beans on this one a while back. The most hipster thing ever was a scene in a movie, Slacker, from 1991, where one of the on-screen characters offers an Oblique Strategy card to another and the card reads, “Withdrawing in disgust is not the same thing as apathy.”

I think this is the hipsterest utterance in fact or fiction. An encyclopedia on all things hipster could not better describe the frustration with the limitations of mainstream society and culture that motivates the polyvalent countercultural set lumped together beneath the umbrella of “hipster.” At the same time, it captures the mischaracterization of — which leads to hostility towards — hipsters as disingenuous slackers hellbent on sliming away their days in superficial pursuits. Trying to unpack that tension is why this column exists, along with every other media outlet trying to figure out hipsters. Everything else is just window dressing.

Finally, before you all go getting mad at me for bestowing this honor on a scene from a movie rather than a real person, remember, the very idea of “hipster” is 95 percent fiction in the first place. It’s a social construct designed to smack a label on something that resists definition by its very existence. If you expected anything else, you only have yourself to blame.

With all the hue and cry of late over internet privacy, I wonder, should I delete Facebook?

Personally, I say yes. In the late 2000s, I realized early on how badly the company was eroding privacy, so, after about one month of membership, I ragequit Facebook way before it was cool. Nowadays, I stay away not because of the privacy concerns, but because comparatively, unpluggedness gives me boatloads of hipster pleasure. It’s not like you can actually escape Silicon Valley’s endless thirst for your private information, because if Facebook doesn’t get it, somebody else will. But you can’t imagine how nice it is to have basically no idea what your friends are doing til you make the effort to get in touch. Seriously. You think I’m joking, but I’m not. When it comes to “connectedness,” less is really more, and purposeful connection, however intermittent, feels better than constant, incidental, superficial connection. I can hardly think of anything more hipster than that.