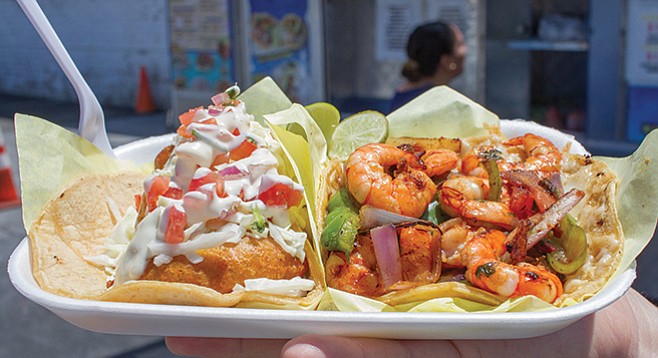 For pure evocative force, it’s hard to beat the Germanic. “Shrimp” — taken from schrimpfen, “to contract” — works well in this way: the thing is basically a shrunken lobster. But for culinary loveliness, it’s better to go Greek: kámmaros, leading to the Latin cammarus, and from there to the Spanish camarón, an altogether more delectable proposal. Taco-wise, it’s the sort of thing you get once you know a place and think well of its less bottom-feeder-y offerings. It’s easier to forgive mushy-middling al pastor than it is a stale shellfish. A shrimp taco doesn’t have to be fancy (though it dresses up nicely), but it does have to be right.

You could fill this whole entry with the ingredients list for City Tacos’ two shrimp offerings: the Camarón ($4) with its serrano chile egg battered shrimp and grilled Mexican squash and corn under tomatillo salsa dotted with cilantro and red onions, and the La Mesa ($4.50), which tosses the critters in with onion, garlic, celery, and serrano chiles, then lays them on a browned sheet of melted Oaxaca cheese before adding cilantro aioli and microgreens. But then you wouldn’t have room to note the delicacy of flavors, or that textural interplay is the principal joy here (especially for the La Mesa), or that the shrimp are the most translucently melty we’ve found.

“Patience is the essence of fine Mexican food” is this local chain’s motto, and yes, you’ll wait a little bit for them to bring your order. But the sweet simplicity of what arrives ($4.95) makes it worthwhile. Sizzling hot shrimp, yielding to the bite, under a great pile of cool glistening lettuce. McDonald’s could only ever dream of such a hot side hot-side-cool-side juxtaposition. There’s not much more to it than that, except for some pico and a richly corny tortilla. A basic taco with every element attended to with care.

This is what happens after those pigs plunge into the sea in the Bible. The shrimp taco with bacon and the shrimp taco with chorizo (both $4.65) at Oscar's offer sweet, succulent, meaty ribbons of shrimp. The bacon version layers them with the sweet fat of bacon and the rich fat of avocado. The chorizo will add a liquid squish of seasoned greasiness to each bite. Either way, your tongue may drown. Both are served on a hardy corn tortilla with cheese, avocado, shredded cabbage, tomato, red onion, and cilantro.

Shrimp tacos come either fried ($3) or grilled ($5.25) at Mariscos Alex food truck. Both are heavy-duty affairs: the fried boasts three shrimp blanketed in springy-spongy batter (think Orson Welles intoning “crisp crumb coating”) and buried under crema and cabbage. (Is that garlic powder in the batter that keeps you horking it down?) The grilled doubles the shrimp count, six smallish but flavorful curls, one for each bite.

Most everybody knows about Blue Water already. But what Mrs. Martin knows is that the grilled shrimp taco is the secret mainstay of the menu, the thing that keeps her coming back and standing in line even if she winds up getting the steelhead special once she gets to the counter. She likes the pale, unobtrusive tortilla, papery like a dumpling wrapper. She adores the great mound of properly crunchy cabbage and the scattering of scallions. And she loves the fat (she’d call them “plump”) camarónes that resist when you first bite into them, holding back their goodness for a moment and then bursting for joy.