Every taco tells a tale 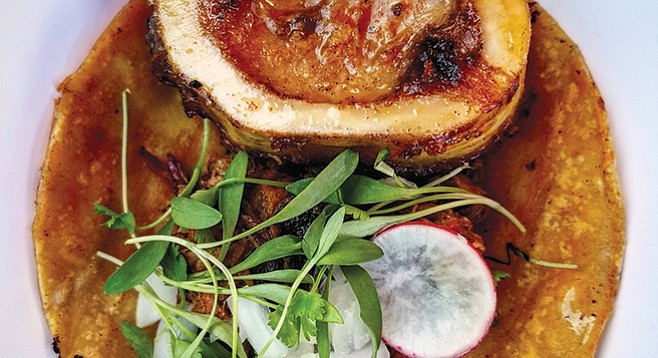 Some speak of ancient Aztec pit cooking. Some recall distant coastal villages and the catch of the day. Some crow about the possibilities when price is not an object (you may have heard murmurs of a $20 taco in the Gaslamp). Others suggest home, comfort, and simplicity. These are the tacos we will consider today. While there’s nothing probably wrong with top-dollar, next-wave taco craft, there is something that will always be right about the classics. So, fill up those salsa cups and de-seed those limes, compas, and chew on the words of Austrian composer Gustav Mahler: “Tradition is not the worship of ashes, but the preservation of fire.”

Opening early July in the IDEA1 building, LOLA 55 marries Chef Drew Bent’s (and business partner Frank Vizcarra’s) love for woodfire cooking with San Diego tacos. “Similar to Sonorense-style cooking, where mesquite is commonly used to cook and season food, we are using a Santa Maria wood grill to add that little bit of ‘what’s missing,’” says Bent, who was adopted by Mexican neighbors as a kid in Linda Vista, raised in Guadalajara, and went on to study under Chefs Luis and Ricardo Arellano at Criollo in Oaxaca. “We are sourcing the best ingredients we can and using traditional and modern techniques to create a cuisine that’s rich in flavor, but light on the belly.”

It’s easy to overlook the hole-in-the-wall that is Tacos el Panson across the Boulevard from Hoover High, but what is seen cannot be unseen. The first thing you notice is a towering red trompo rotating in the window. Inside, seasoned chicken breast sizzles on the flattop as birria vapors pour from a cauldron. Time-honored bits of bovine such as buche, tripa, suadero, and cabeza come out of the kitchen on handmade masa tortillas. At $1.99 each (or $2.50 for fish and shrimp), it’s among the most authentic bang for your buck you’ll find this side of San Ysidro. The adobada fat crisps to a glaze on its sojourn around the spit and sweats spices suggestive of Christmas morning and candied yams.

As if it were dug up in a beach town outside of Ensenada and transplanted onto thirsty 30th Avenue, the Taco Stand (one of four San Diego locations) declares its Baja provenance with a menu hand-painted on corrugated tin, cumbias blaring from the stereo, “North Park” spelled out in Corona font, and the borderland poetry of “HAY WAI FAI” (“There’s Wi-Fi”) inscribed on white cinderblock walls. All the approachable taco grill go-tos (beef, chicken, al pastor, shrimp, grilled/battered fish, and cactus) go for around $3 while the Sonora taco, akin to the Rosarito-style taco perrón, comes on a larger flour tortilla with grilled steak, melted cheese, whole beans, onions, cilantro, salsa, and guac for $4.29.

Any day now, the mission-style abode next to the Front gallery will be opening as Tuétano (“marrow”) Taqueria. Born into a Tijuana family of restauranteurs, Priscilla Curiel-Gutierrez has been saving up since she was 19 to open her own business. In 2010, she enrolled in the culinary arts program at the Art Institute and, five years later, began catering a side menu while serving as chef/manager at Talavera Azul in Chula Vista. “The menu is very simple classics made right,” Curiel-Gutierrez says. “The specialties are beef birria and guisados [stewed meats]. Bone marrow is cooked in birria broth and then grilled.” Eat the buttery marrow by itself or served on fresh, flour, or fried tortillas.

Just off Interstate 805 a few exits shy of TJ, Tacos el Ranchero parks in the vacant lot of Don’s Auto Repair & Smog along bustling Telegraph Canyon traffic. Here, it’s all about the celebrated Tijuana street meats such as carne asada, adobada, birria, cabeza, tripa, lengua (when’s the last time you got some tongue?), and even tacos al vapor (steamed tacos), all for $1.90 each. The tacos come out sprinkled with onion, cilantro, and a creamy avocado sauce. Grab your Styrofoam plate, smack those suckers with salsa, and enjoy a taste of TJ from the roadside. It’s loud, authentic, and entirely delicious.

What started nearly two decades ago as a weekends-only lamb barbecue kitchen based out of a convenience store has become a City Heights destination for mixiote de borrego, which is marinated for 24 hours inside maguey leaves and simmered for six. El Borrego Restaurant owner Rodnia Novarro and her mother Rosario Sotelo — whose cuisine draws upon dishes from her hometown of Hidalgo — prepare succulent barbacoa tacos for $2.99. Grab a half-pound of lamb or cochinita pibil (pulled pork marinated in citrus and achiote and ‘cued in a banana leaf) for $11.99, or up to a kilo (that’s 2.25 pounds, America) of barbacoa for $43.99.