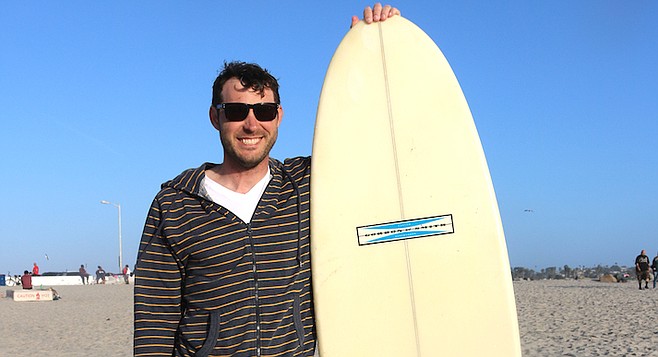 Eric Elmore has been surfing at the Mission Beach jetty for about 20 years.

“It’s ridiculously territorial here,” he said, “a guy was new to the area and he was like taking off on every wave; and the local big dog came in, took the guy's shortboard away, threw it and said 'get out.'

"Here there’s like a pecking order when there’s a lot of people, but there’s isn’t anyone out today (on the first week of April).”

His wife was chilling on the beach with their infant, while Elmore and their three-year-old shared the water with only one other surfer.

“He’s (their three-year-old) been boogie boarding and paddle boarding,” he said, “he knows his limits and not to get clobbered by a wave.”

The clean two-footers enabled Elmore to catch a handful of turns and floaters on his single-fin 6’10” Gordon and Smith.

“I like it because the rails are really thin but it paddles really nice,” he said. “I can get into the bigger waves and it’s maneuverable, and still ok enough to ride on smaller waves.”

Soon he and his family will frequent the La Jolla Reefs because “it’s south facing for the summer swells …. everything from the equator south is where the storms come from and that's what generates the waves — those southern storms,” he said. “It’s their winter when it’s our summer and that's where most of the waves are coming from.”

Then during winter, he rolls out to Sunset Cliffs and occasionally drives 300 miles north to the Central Coast.

“I was destroyed at Morro Bay,” he said, “they were eight-foot barrels and my board got caught up on the face of the wave, came over the lip, and hit me. It sliced my head and gave it a horseshoe flap. It was like a half mile walk to my car and then I drove to the hospital with my jacket wrapped around my head …. then 14 staples later, I was good.”