A step up from the airport 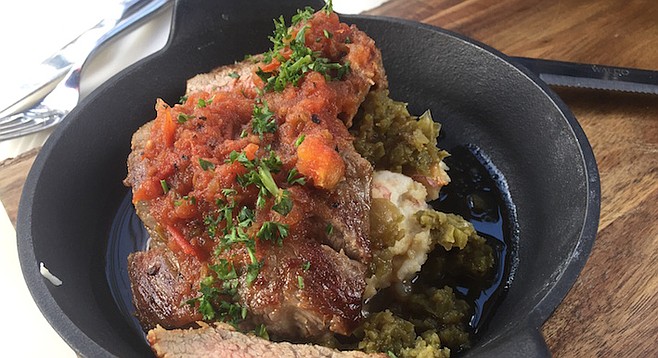 Westfield UTC Shopping Center was once a typical Southern California mall, but is becoming a small city geared toward the one percent. Soon there will be luxury condos on premises, so that people can walk from their own bathrooms over to Pirch, where they can consider upgrading to a $25,000 bathtub.

At one end of the mall are upscale restaurants such as The Winery and the new Larsen’s Steakhouse (where you can get a lobster tail plate, minus any sides, for $69). At the other resides the rink where I learned to ice skate as a kid, surrounded by a casual indoor foodcourt that includes worldly offerings: Vietnamese, Indian, Japanese, Korean, Mexican, and Chinese, along with American fare. 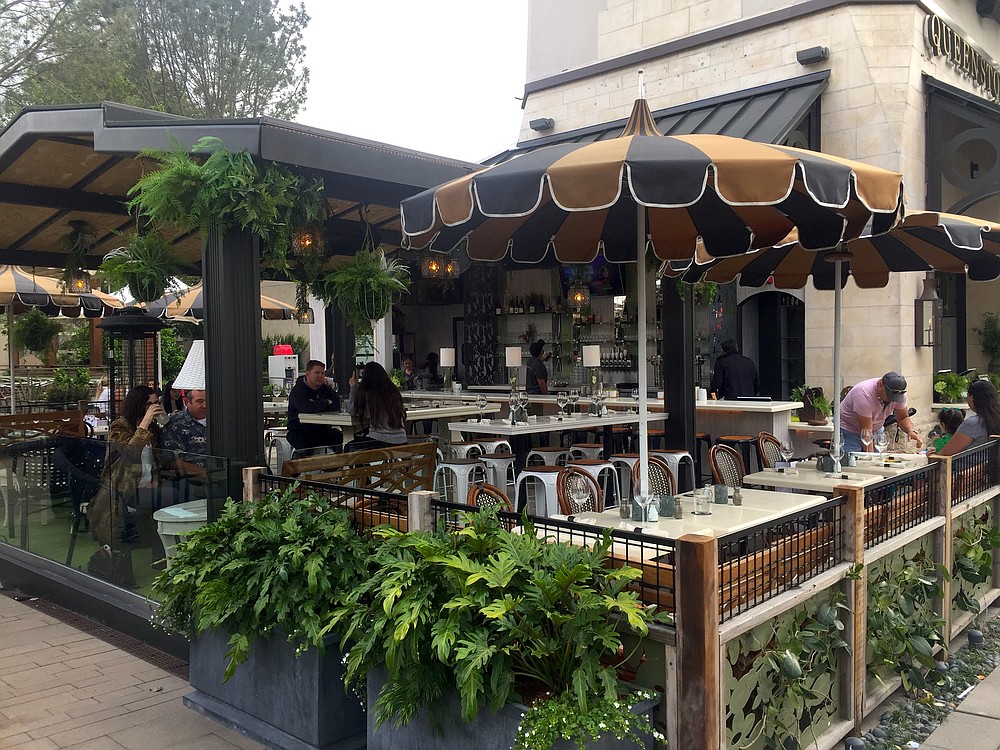 Queenstown Bistro on a cloudy afternoon

In typical food court style, you order at the counter and bring your tray to one of the tables in the area. But if you step outside, you’ll find a fancier option that brings you to yet another worldly destination: New Zealand. 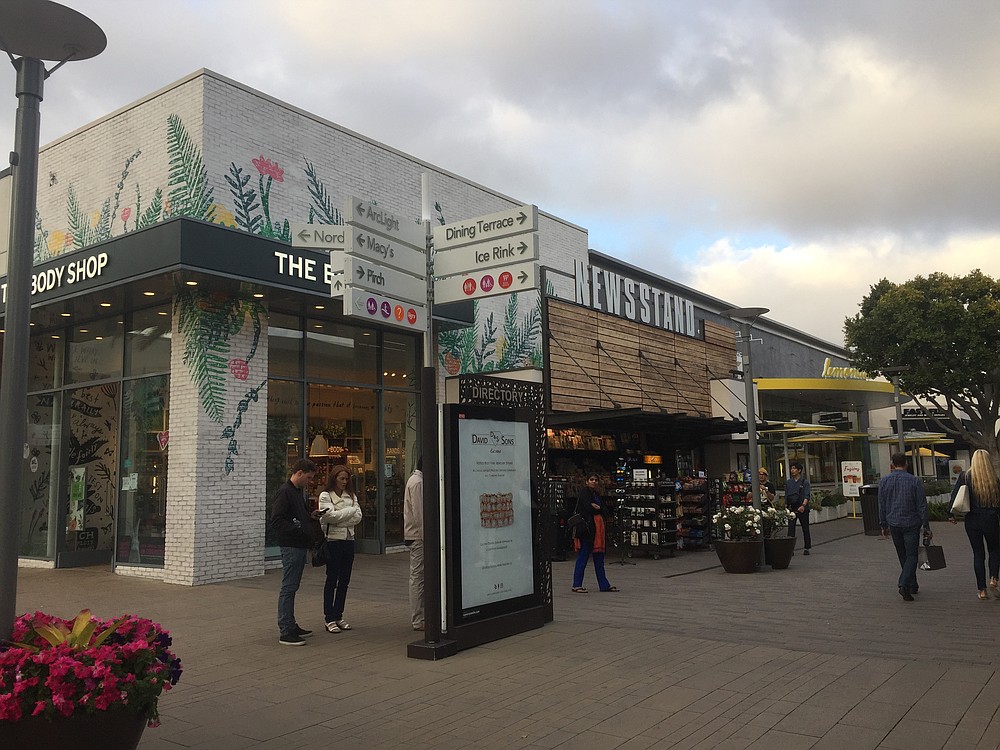 The newsstand across the way completed the airport dining feel.

Queenstown Bistro is an offshoot of Queenstown Public House in Little Italy. The Bistro is a cordoned-off outside dining area in the middle of one of UTC’s outdoor courtyard areas. This one has plenty of lounge and table seating, and a stage for live music. When we took our seats “in” Queenstown on this cool cloudy evening we could hear, but not see, live music with local jazz singer Whitney Shay. 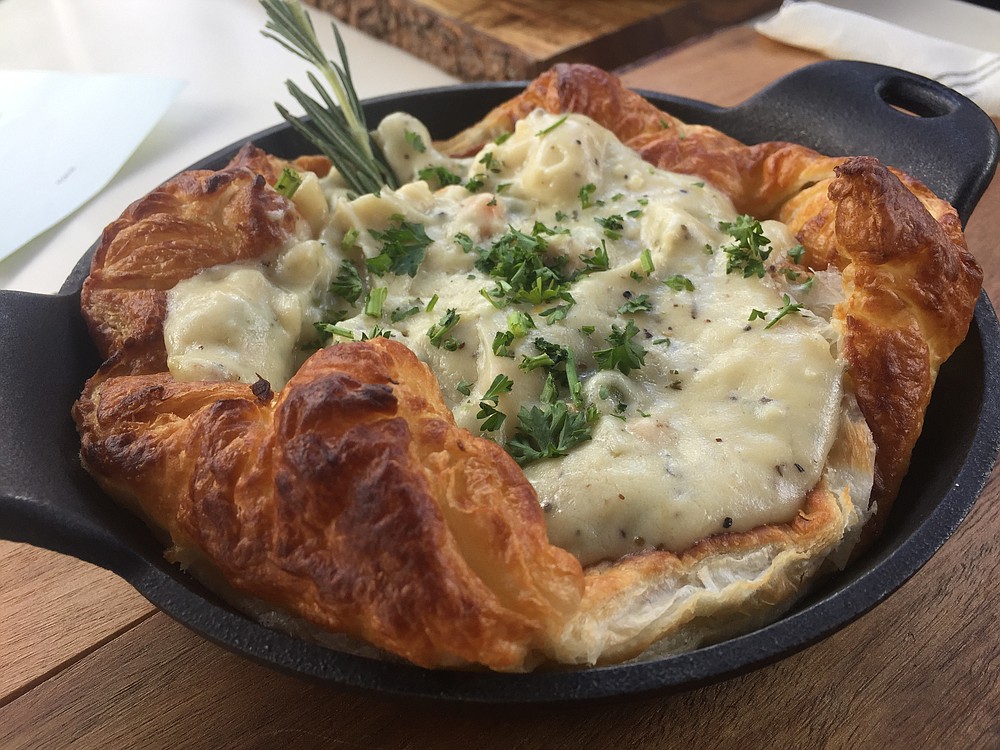 Sitting beside the railing, with a full view of people walking by, was reminiscent of the airport, but with a lot more dogs and people who seemed less frazzled. There was even a newsstand across the way, which cemented that “we have a long layover and therefore time to sit in this nice space and be table-served rather than over there in the hubbub” feeling. I like to people-watch, so for me this was an ideal setting. 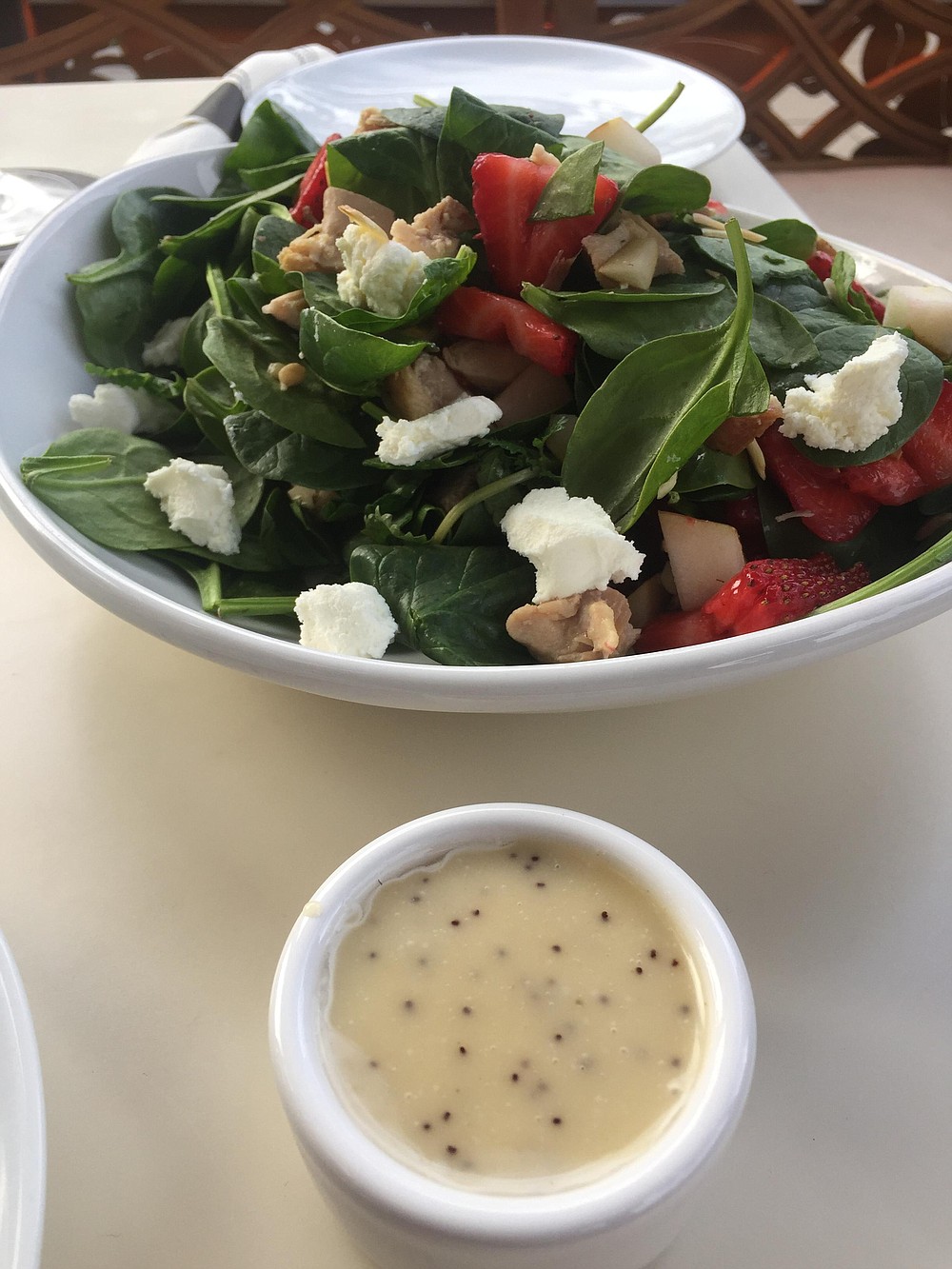 My man and I began with hot small plates, as it was chilly out, and a breeze had begun to pick up. I got the chicken pot pie ($16). Though savory chicken was the prominent flavor, I found only one tiny piece of the “slow roasted pulled chicken” that was supposed to be in the tasty mush. I wondered if it had been blended in with a food processor. At one point, I pressed my fork into the gloop, looking for anything solid. It was more like a rich gravy with carrots and peas. Tasty, but lacking the pleasure of the chew, save for the puff pastry, which was good. David thought it reminded him of the Stouffers boil-in-bag chicken a la king his mother used to serve in Pepperidge Farm puff pastry shells — a dish from his childhood that he likes.

David ordered the flank steak ($17), and loved everything about it, from the tender meat to the roasted tomato salad, bright poblano sauce, and smashed potato beneath. He was content with his dish and had no criticism other than the upscale mall pricing.

The chicken-flavored gravy had been so rich that I craved a refreshing finish to the meal. So, for dessert, we got the strawberry chicken salad to share ($13), with spinach, pear, toasted almond, and goat cheese. It was served with a lemon poppyseed vinaigrette, which added to the refreshment. Thanks to strawberry season, the berries were bright red and tangy-sweet, and the goat cheese had a lovely, silky texture. My only quibble with this dish again had to do with the chicken. Though flavorful and not overcooked, a number of chicken cubes had some gristle attached, and it would have been better if they’d been properly cleared of cartilage.

On this particular Sunday, I was at the mall to catch a movie. It was nice to have a place to sit, relax, listen to music, and watch the people passing by.