The wild west is back in San Diego

Limebike hogs show, but it is Ofo bikes that are stolen 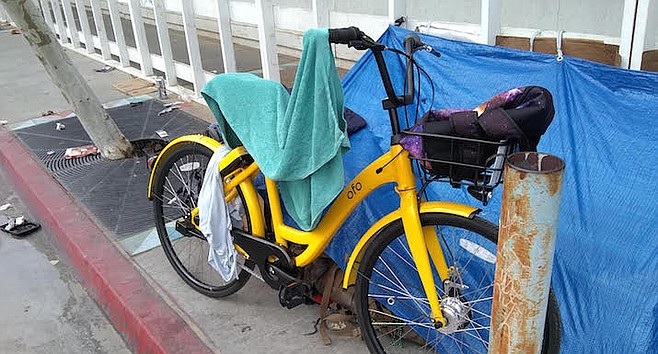 Sunday afternoon in El Cajon I unsuccessfully tried to find an ofo dockless rental bike to help me get around town. I traveled to five locations where the ofo app listed an available bike, but in each location no bicycle was in sight. 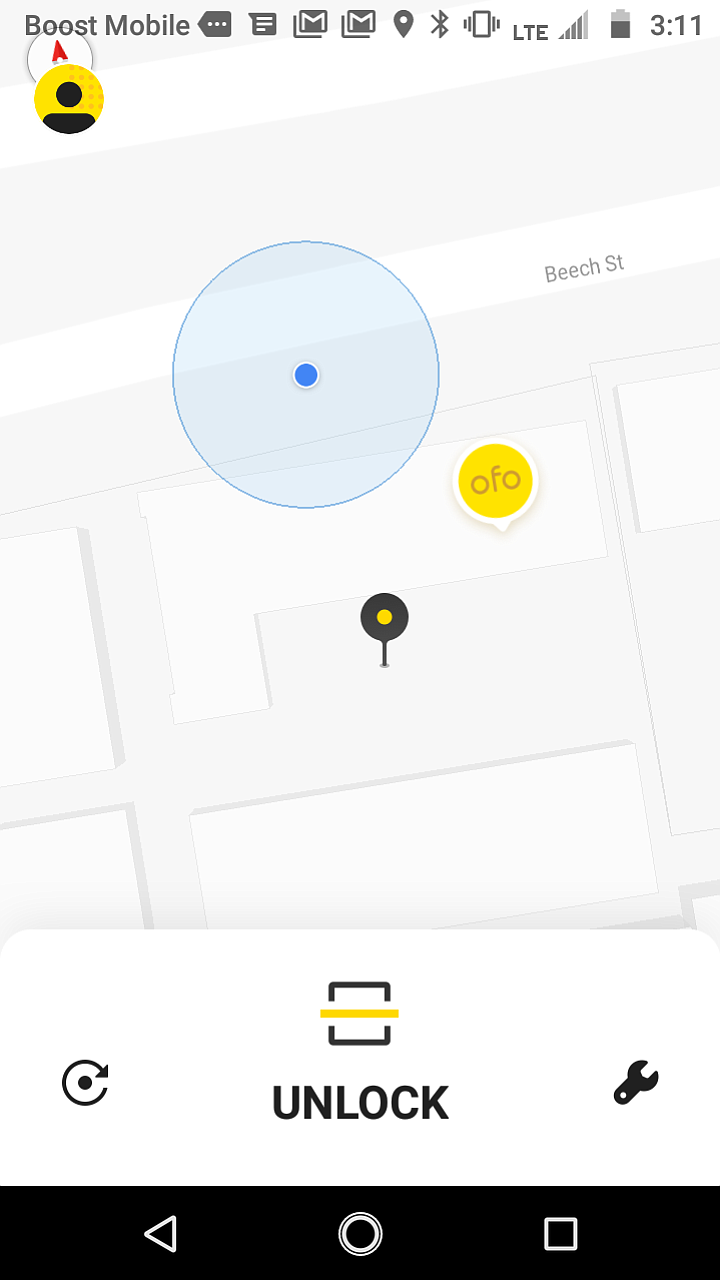 The five bikes showed up on the app within a two square mile area in central El Cajon. First I traveled to Ballard St. at Decker St., where a bike was shown somewhere inside the El Cajon Mobile Home Park. I walked up to the exact location to find the ofo icon in the app hovering right in the middle of one of the mobile homes. No bicycle was in view outside.

During the prior week I had the same experience with ofo in Lemon Grove, Spring Valley and La Mesa. In East County people are stealing away dockless bikes and stashing them inside their homes and garages. Ofo seems to be the thief’s bike of choice. 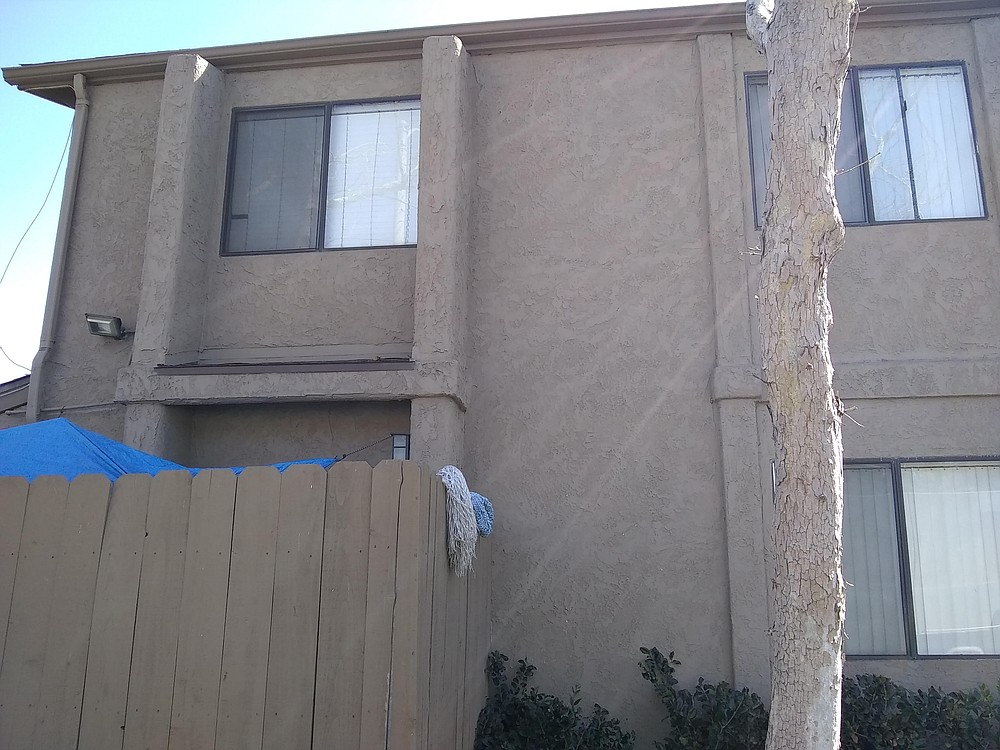 While downtown San Diego and other central neighborhoods have a problem with too many bikes crowding public areas, East County has a problem with the public being deprived of the bikes that make their way out here. In response to an inquiry ofo stated, “NEVER park ofo bikes inside a residence.” 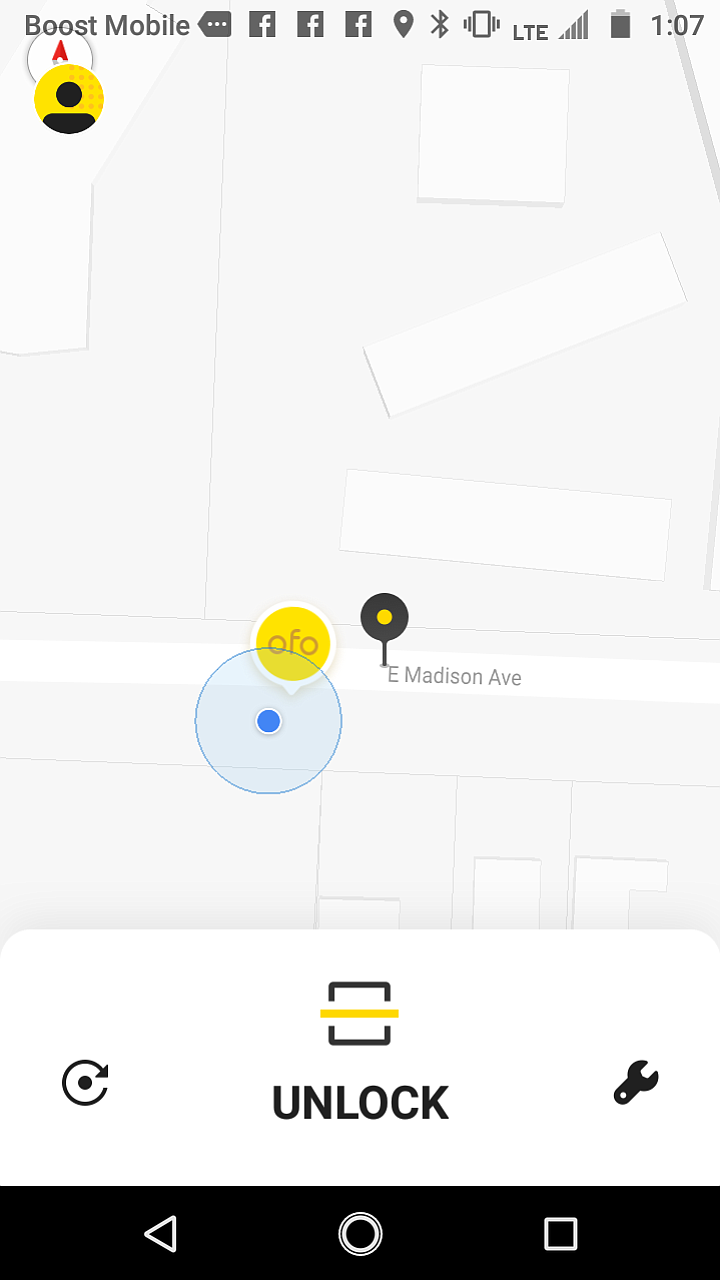 If not in its place above ground, it must be underground.

After my first failed attempt to get an ofo in El Cajon I tried to find a Limebike. There was only one available Limebike listed nearby and I was able to retrieve it. I haven’t personally found any cases of stolen Limebikes yet. I decided to use the Limebike to investigate whether any of the remaining four ofos in the area were actually available to the public. 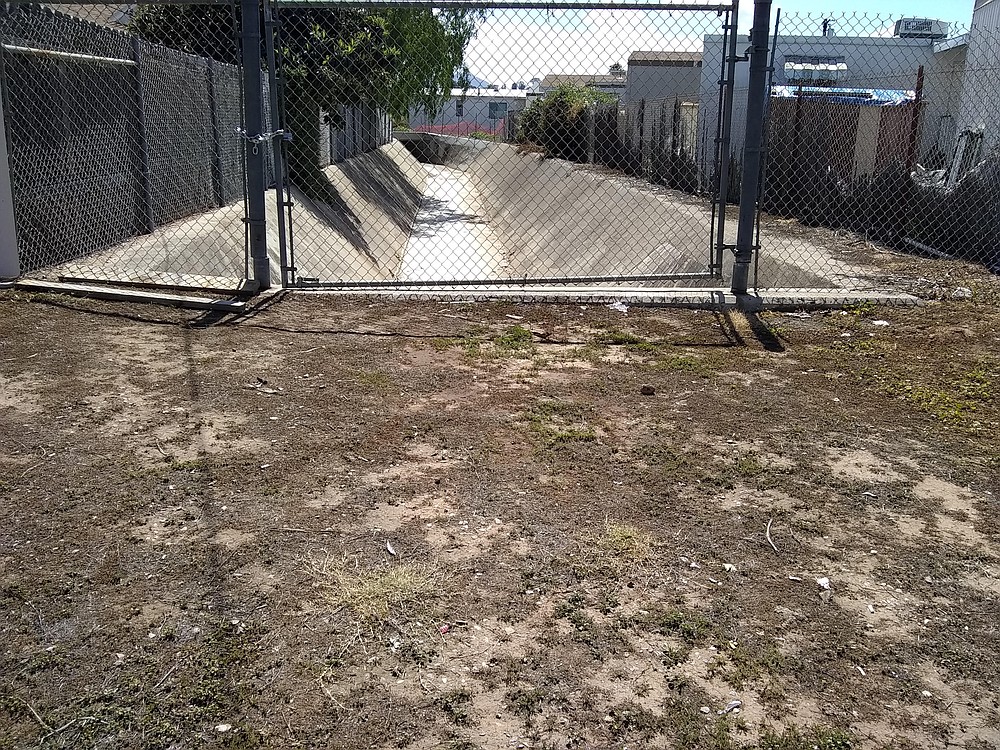 My next stop was Madison Avenue, a block east of 2nd St., next to the Sahara Mobile Lodge. This time the app was showing the ofo icon hovering between the sidewalk and street, not inside a home. But still no bicycle was in sight. Then I noticed a sewer cap directly in front of me on the street. Several feet away in the other direction, on the other side of a chain link fence, I could see a stormwater drain running underground toward the street. If the bike could not be seen above ground where it was located, it must have been underground. Someone stashed an ofo bike inside an underground tunnel. 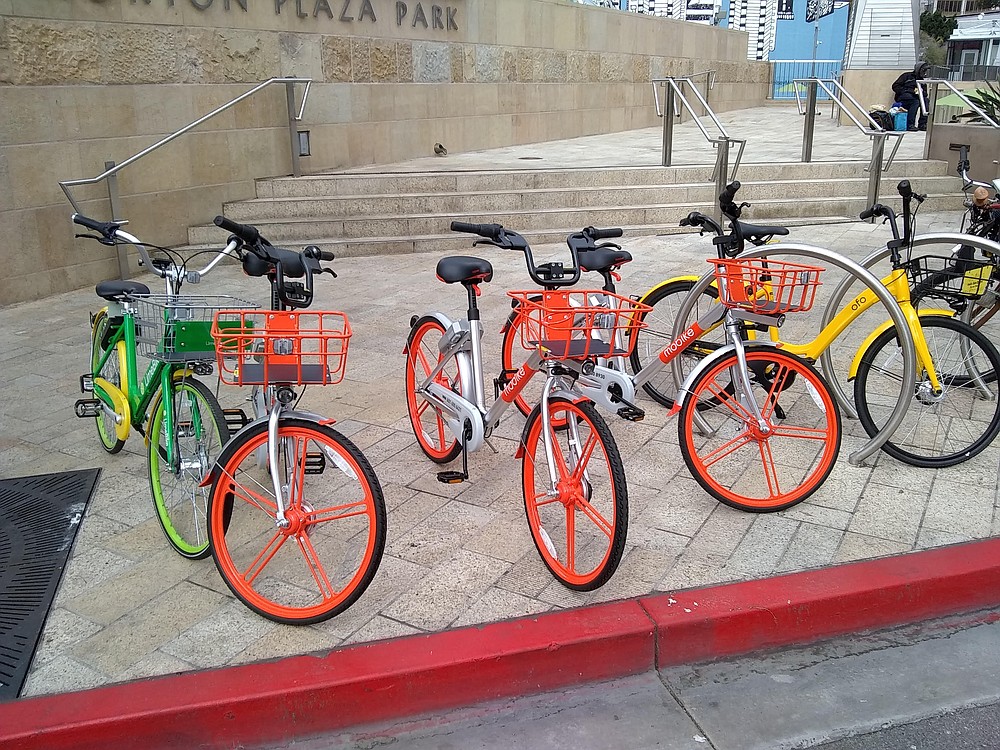 I continued to the next three stops. I went to an apartment building on Madison Avenue adjacent to Wells Park on its western boundary. I went to another apartment on Beech Street at the corner of Graves Avenue. My final stop was an apartment on Park Avenue a block west of Magnolia Avenue. In each case the ofo bike was stashed away inside the building. After five tries I gave up trying to see if there were any ofos in El Cajon that were not stolen. 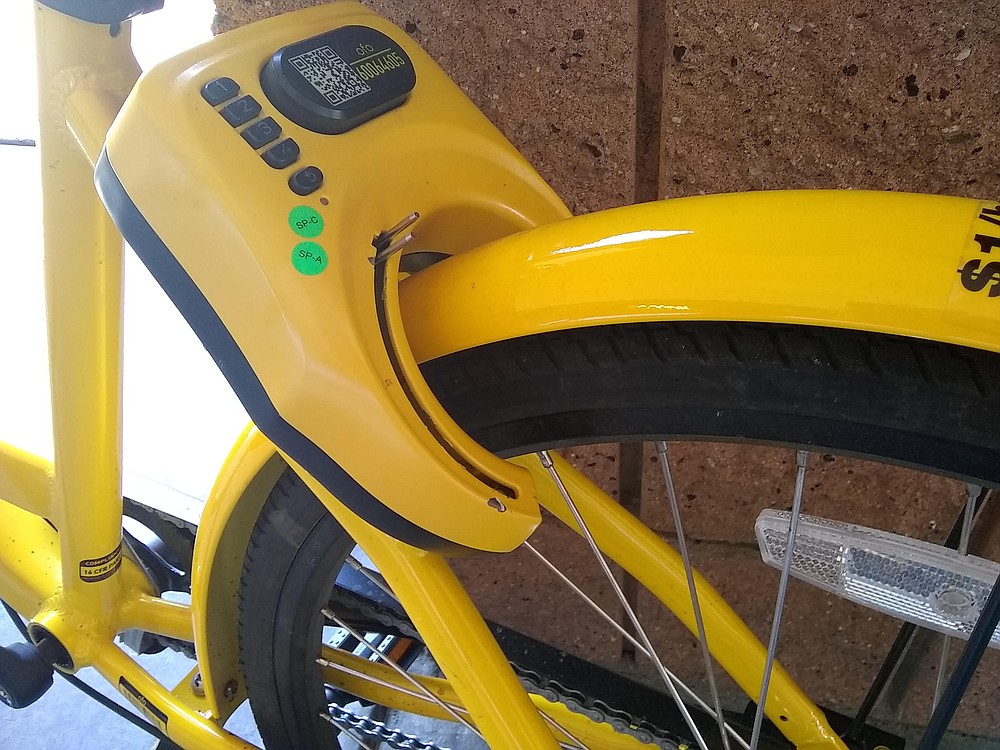 Broken locking mechanism on an ofo bike in El Cajon on March 28. The bike wasn't even showing up on the ofo app through gps.

In case you are wondering if the incidents I had with ofo were simply glitches on their app, at one apartment complex a resident who was outside confirmed to me that he did have an ofo bike inside his apartment.

Ofo also has a problem with damaged bikes. I had to make damage reports on the majority of ofo bikes I was able to retrieve the week before in other areas. Damage included missing brake cables, missing kickstands, bent handlebars, and warped wheels. One bike looked as if it were run over by a truck.

I couldn’t help but notice a news report just before publication of this story in which ofo states they are not aware of any reports of their San Diego bicycles having cut brake cables. I reported a missing brake cable to them several days ago.

My guess as to the reason ofo is having more problems than Limebike is because they offered use of their bikes for free during the month of March. It’s obvious more ofos have made their way to East County than Limebikes. It does not appear that any Mobikes have made their way east. I still haven’t seen Spin anywhere in San Diego. Perhaps they haven’t expanded beyond UCSD.

Even in downtown San Diego, there is a striking contrast between the misuse of ofo compared to Limebike. I saw several ofos commandeered by people strapping their belongings to them or using them as clothes hangers, tentpoles, etc.. I didn’t happen to see any commandeered Limebikes downtown.

It’s not only the relatively better odds of avoiding a wasted trip to find a Limebike in East County that makes it shine compared to ofo. Their electric assist bicycle is what steals the show. One of the Limebikes I rode was a Lime-E. The benefit of having that electric-powered boost is huge in a city full of hills.

Happy to find a Reader article that doesn't attack the dockless bikes! Living downtown I concur that the ofo bikes are the ones that are ususally misplaced, used by the homeless, etc.; free isn't always a good thing haha

I saw a Limebike rider towing a baby stroller full of possessions. They were all a little wobbly. Bike trailer-tows will be the next invention available.

How about a song, like: "Who let the bikes out? ding ding" 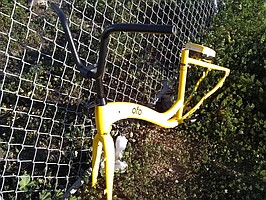 The more I try to find an ofo to use the more places I find have problems with them. Every ofo listed on the app by the Euclid trolley station was damaged in some way. This one was completely stripped and still showing on the app as available! Yesterday I went to Hillcrest to work on another story. There was a bike rack with three ofos lines up. They were all out of service due to damage. The ofos in the neighborhood that were listed as available had even worse damage. It took me two hours to find a working ofo. Finding a free ofo in some areas turned out not to be worth the time. It will be interesting to see what happens tomorrow when all these damaged, stolen and commandeered ofos are no longer free.

It sounds incredibly naive to think that "free" ofo bikes would only be used by responsible environmentally conscious riders. The ofo bikes will soon not be free if there are any left.

It seemed so obvious that the dockless bikes would soon be damaged, stripped, moved out of nearby areas or stolen. Some have probably gone south of the border. 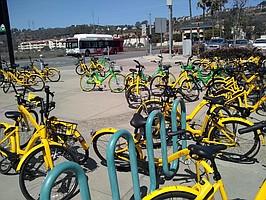 at Fashion Valley by ebartl

Yesterday I saw the first ofo bike in my neighborhood. It was parked in front of the grocery store. Today the bike was behind the grocery store with a missing tire and tube. I don't see how any of these dockless bike companies can make a profit given the vandalism and parts theft. They will soon be gone.

The tiny Smart Fortwo cars didn't last in San Diego, either. Esp. after they went all-electric.

Did the city of El Cajon approve these yellow (OFO bikes) eyesores? Parked all over the place. No racks, just left in the way of pedestrians. The inconsiderate riders of these bicycles also quite often use the sidewalks (illegally) to get where theyr'e going. This is a dangerous practice mixing with pedestrians who may not be aware of some jerk riding fast - coming from behind and nearly colliding with said pedestrian! I've yet to see police enforcement of anyone riding a bicycle on the sidewalk. It's a state law. get off your lazy butt and earn your inflated paycheck!

Some streets have bicycle lanes, most do not. I understand bicycle rider safety as I once was an avid rider myself, but one is compelled to follow the laws set forth because of obvious reasons. That aside, if one should choose to ride on a sidewalk, then that person should give the pedestrian plenty of room when passing by, not get as close as possible to the person and nearly causing an accident which would no doubt cause injuries. Also a verbal warning or bell ringing to alert a pedestrian that a bicyclist is approaching from the rear would be a courtesy. This blatant disregard of the law puts people at risk, especially seniors. I think sidewalks could be shared if respect and some basic rules were followed.