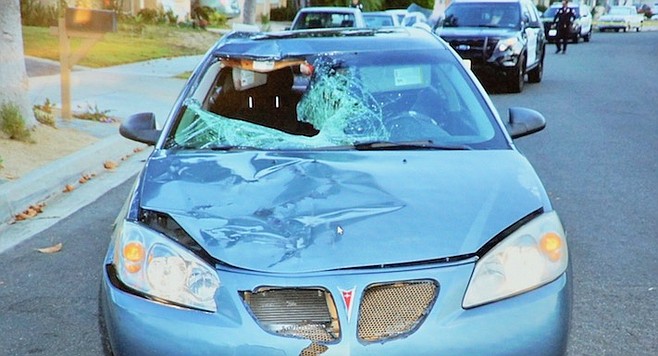 The defense attorney seemed to admit that Esteysi Izazaga Sanchez, 31, drove her car up onto a sidewalk and hit a pedestrian so hard that part of one leg snapped off, while the rest of his body went through her windshield and into her car. And the then 29-year-old woman, after a night of hard drinking, continued to drive another mile toward her own home in Oceanside, where she abandoned her damaged car — with the body inside — one street away from her own home. 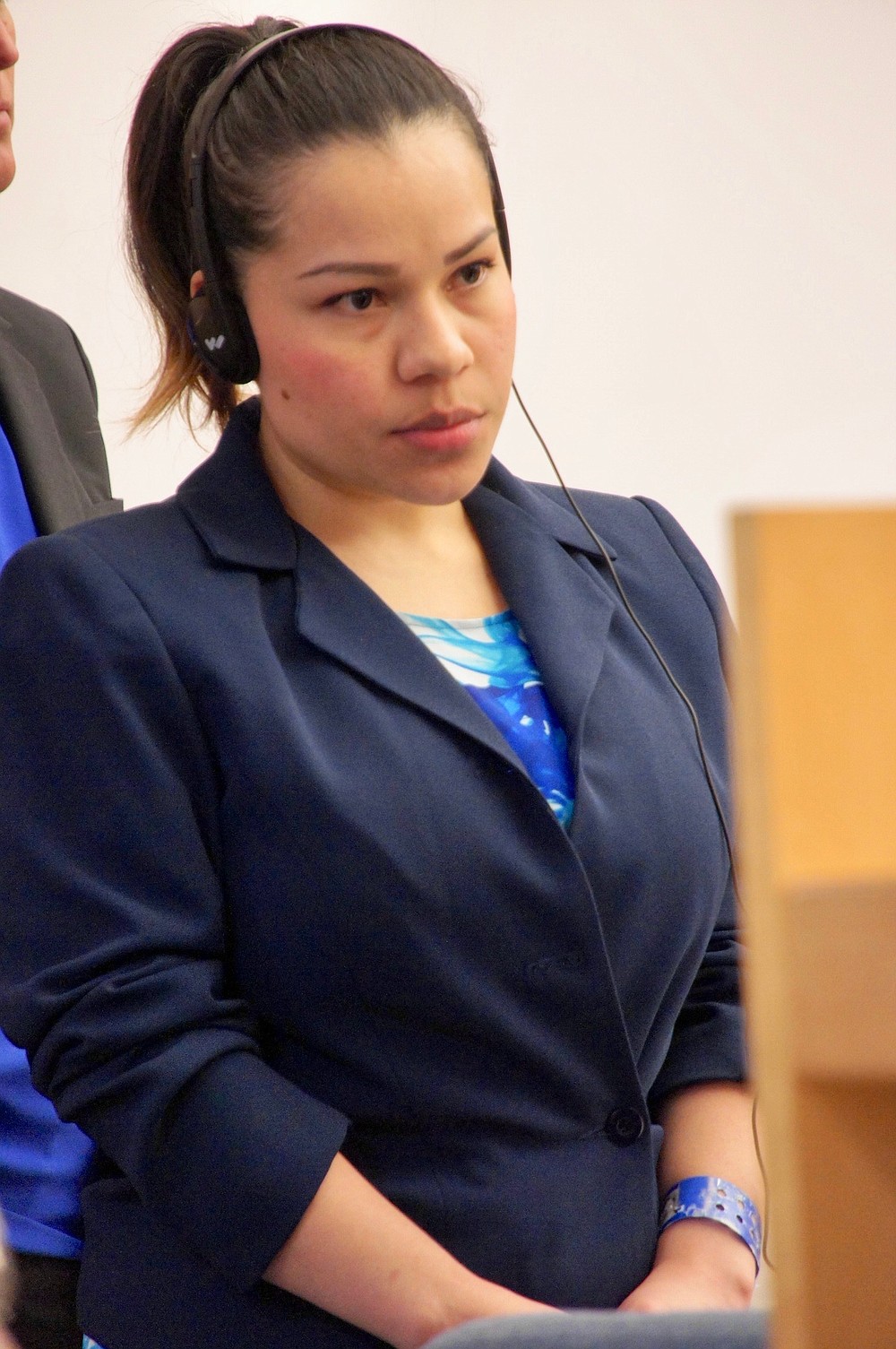 Esteysi Stacey Sanchez. Sanchez’s husband about 5 a.m. phoned his wife to tell her she must come home to watch the kids.

Weston suggested to the jury that Stacey fell asleep behind the wheel and “She is not guilty of felony DUI with injury, she did not do something wrong.” He said, “She was not conscious at the time the vehicle went off the roadway.” And, “You should find her guilty of certain charges but not others.”

Jack Tenhulzen, 69, died on impact about 6 a.m. on June 27, 2016. The fatal collision happened on Mission Road where it passes under highway 76.

Prosecutor Robert Bruce showed video to the jury, taken by a man who said he witnessed Sanchez get out of her vehicle in front of his house, then stagger down the street, while she was on the phone explaining the situation to her husband.

The video continued while the witness walked around the car, first revealing an upside-down man in the front passenger side, his head on the floor and his legs up the seatback. He was only wearing underwear because the impact jerked him out of his pants and shoes, the prosecutor said. The video continued around the car to reveal a disembodied lower leg setting on top of the car’s trunk. Spectators in the courtroom repeatedly gasped at the sights.

The first witness to testify was Sanchez’s husband, who confirmed that about 5 a.m. he had phoned his wife to tell her she must come home, to watch the kids, because he had to leave for work. She called him back about 6 a.m., crying hysterically, to say there was a man in her car and she thought he was dead.

The prosecutor asserts that Sanchez was drinking with her gal pals since about 10 p.m. the previous night, and they met with some male friends at a Super 8 Motel about 3 a.m. Hotel surveillance video confirms Stacey started home after her husband phoned her.

When police caught up to her at her home, she had changed out of her blood spattered-clothes but still had glass in her hair, the prosecutor said. Her blood was drawn some hours later, at 9:50 a.m., and it tested at 0.17 blood alcohol content. A toxicologist will testify that her blood alcohol level while she was driving would have been 0.22, the prosecutor told the jury.

Defense attorney Herb Weston told the jury that Stacey Sanchez kept telling Oceanside police she didn't know how it happened and, "I opened my eyes and he was there!" The clarity of her statements is muddled because she mostly spoke in Spanish, and a cop interpreter was used to question her. The defendant also has benefit of Spanish speaking interpreter during her current trial. Evidence will continue Monday morning, April 2, 2018, in San Diego's North County courthouse in Vista, California. 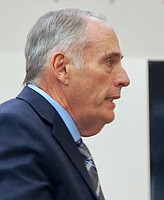 Stacey Sanchez got out of her car already on her cell phone, and walked away with the engine running and lights still on the Pontiac, according to testimony.

You gotta give the defense attorney credit if he can sell "she wasn't drunk she was asleep" defense to a jury. She was driving with a BAC three times the legal limit. That she stayed up all night and was tired is of no consequence. Of course one can never underestimate the stupidity of a jury.

I notice that she's charged with murder. Most of these auto cases go as high as manslaughter, but not murder. Occasionally, a jury will actually come back with a murder-two conviction, but to do that requires a finding of malice and not just negligence. Given the horrific nature of this one, I think ol' Herb has his work cut out for him to keep her out of the joint for many years.

A suspect who has a prior DUI can be charged with murder. That is because they are required to attend an alcohol education course, from 6 to 18 months, where they are supposed to learn the dangers of driving under the influence. To get their driving privileges restored, a convicted DUI defendant must sign a special statement that if they kill someone because of a DUI in the future, they will be charged with murder.

If this case, it is reported she has no criminal record. But she is in the country illegally and was driving without a license. Perhaps the ghastly nature of death and her shameless behavior after the accident will seal her fate.

Thanks for the detailed clarification. I'm sure there will be much more to report on the testimony in this trial.

It is reported "elsewhere" this evening that she was convicted today on all counts, including murder. The report indicated she's looking at 15 to life in prison, minimum. Ol' Herb must be losing his mojo. Time to retire, Herb?

It has nothing to do with attorney Weston. It's unlikely that any lawyer could have achieved an acquittal in this case.

After a one week trial and one day of deliberations, a jury declared Esteyci Izazaga Sanchez guilty of second-degree murder for running into a man who was walking on a sidewalk in Oceanside almost 2 years ago.

“Stacey” Sanchez, now 31, was also convicted of hit-and-run causing death and vehicular manslaughter as a felony. The jury declared their verdicts on Friday, April 6. They also determined that the offenses rose to “strike” status, this is supposed to cause “enhancement” when Sanchez is sentenced next month.

The day after the verdict, Breitbart published a short news story on this case, they claim that ICE intends to deport Sanchez. The Breitbart story stated: “U.S. Immigration and Customs Enforcement (ICE) put a hold on Sanchez shortly after her arrest. An ICE statement regarding the case included that ‘ICE believes Ms. Sanchez is subject to removal from the U.S.’”

The defendant and several witnesses had benefit of Spanish speaking interpreters for all hearings and the trial.

The rear window of the abandoned blue-gray Pontiac was completely broken out, apparently by the disembodied right leg hitting the glass with force.

The victim’s shoes, pants, wallet, keys, hat and other belongings were found in the dirt alongside the sidewalk, and scattered down the middle of Mission Road, near the place of impact.

Dr. Jacqueline Morhaime, of the San Diego County Medical Examiner’s office, testified that scrapes and stretching of the skin on the body made her believe the victim had been struck from behind.

Oceanside police officer Jose Perez testified that investigators found Sanchez at her own home on Avenida Del Gado the same morning as the incident. And that Sanchez had glass in her hair and there was blood on her, when they spoke on the front porch of her home.

A transcript from police interrogation had Sanchez telling police that she did try to get a California driver’s license, “Yes, I took the test but I failed, and they had just given me another date.” The last time she tried to pass the test was “three months ago,” according to evidence.

Sanchez was held in custody since the date of the incident in lieu of $1.5 million bail, but now without bail. Sentencing is set for 8:30 a.m. on May 31, 2018, before Honorable judge Carlos Armour, in San Diego’s North County Superior Courthouse in Vista, California. 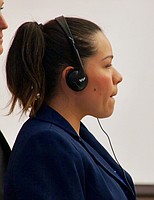 Esteysi Sanchez during her trial. Photo by Eva by Eva Knott

Deport her. We don’t need idiots that won’t learn English, can’t pass a simplistic DMV written test in Spanish, drink alcohol all night, drive and kill people and then try to run and hide from responsibility. This is a monster not a mother.