“One car turned left from Home Depot. Another car heading to the highway clipped him." 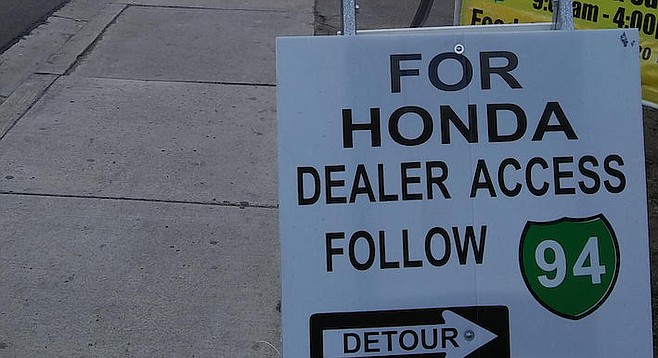 The Lemon Grove Avenue Realignment Project broke ground in August 2016 and was scheduled to be finished July 2017, but local businesses and residents are still waiting for its completion. 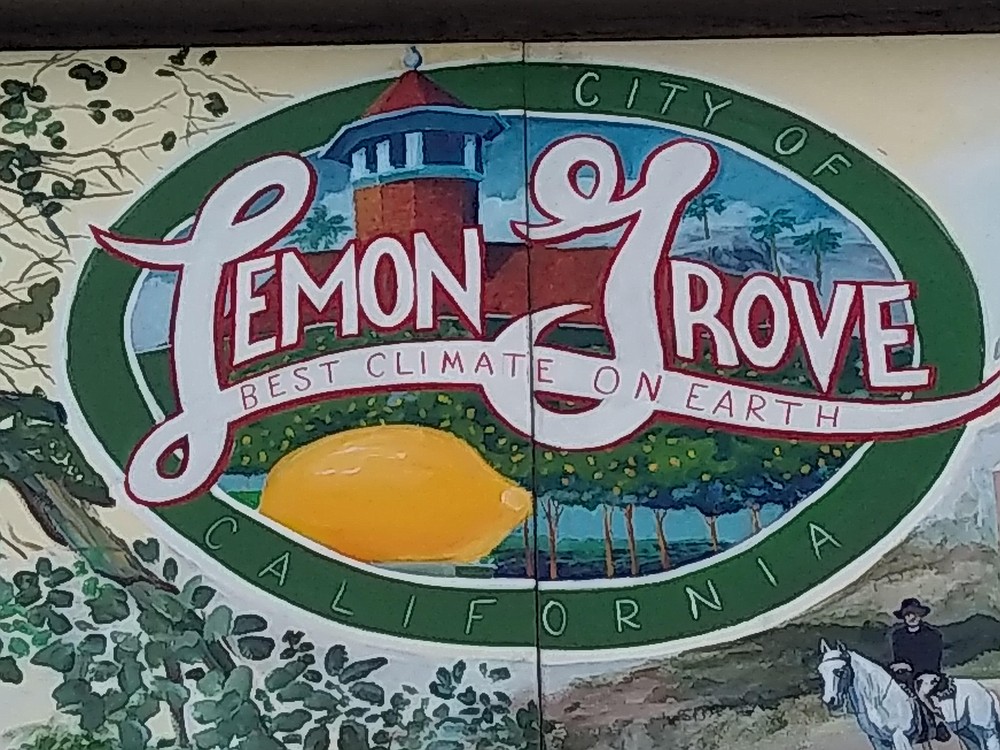 Lemon Grove Bakery. "This is the largest project the city of Lemon Grove has ever undertaken."

Tuesday (March 20) the Lemon Grove city council considered a proposal by city staff and voted 5-0 to extend the project timeline even further — to June 2018. They also amended the project’s scope and increased its budget from $6.3 million to $7.3 million. 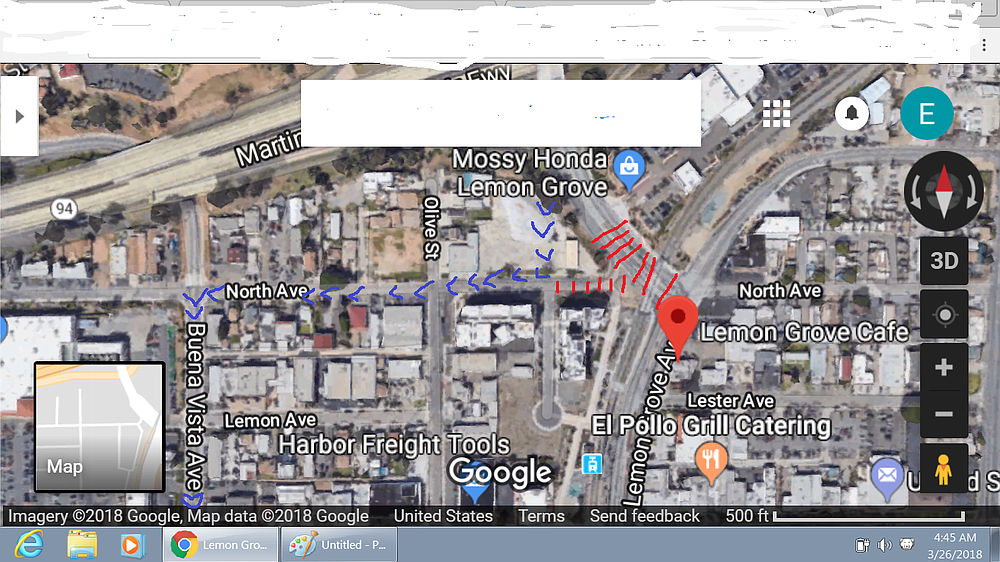 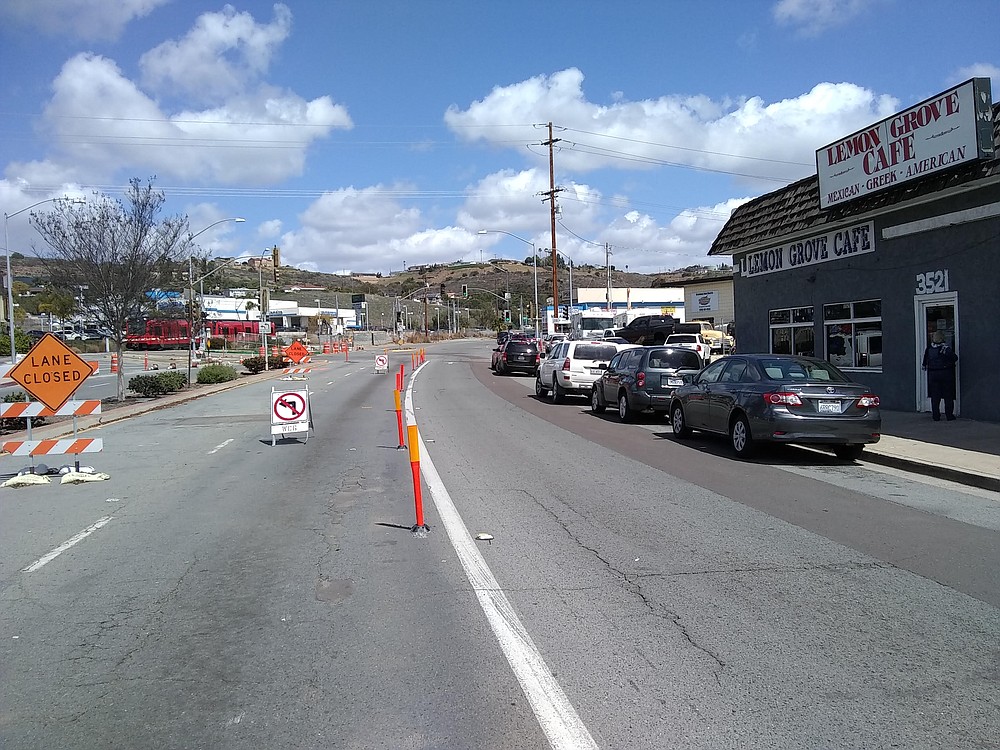 The street realignment will give traffic from 94 more road distance before the trolley crossing and will make it easier than it was before for traffic to divert west when traffic is stopped by a trolley. This will create relief from the traffic congestion the trolley crossing was notorious for. 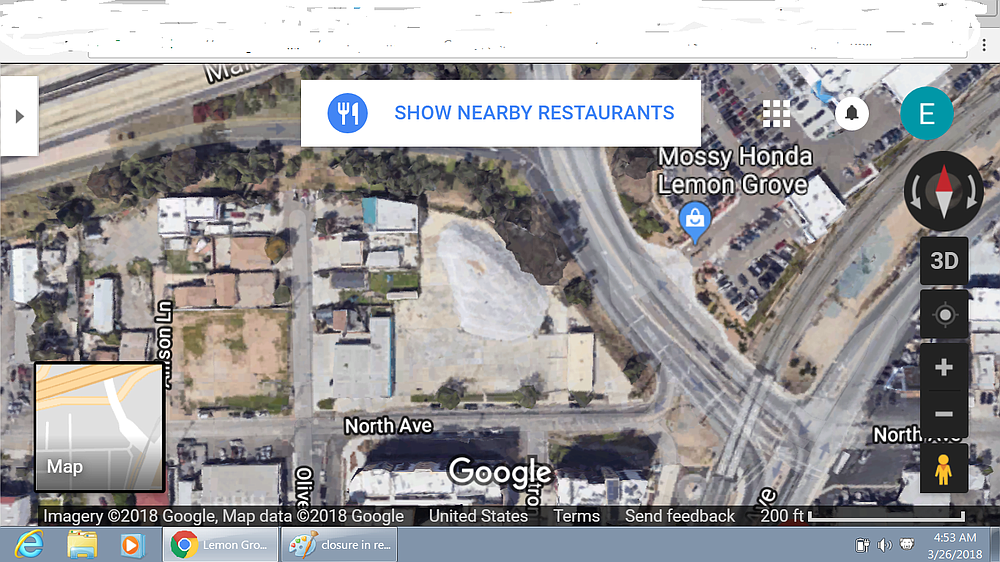 Since January 3 the section of North Avenue that will connect the two segments of Lemon Grove Avenue has been completely closed. The trolley crossing directly north of the Lemon Grove trolley station is part of the closure and vehicles cannot cross there. 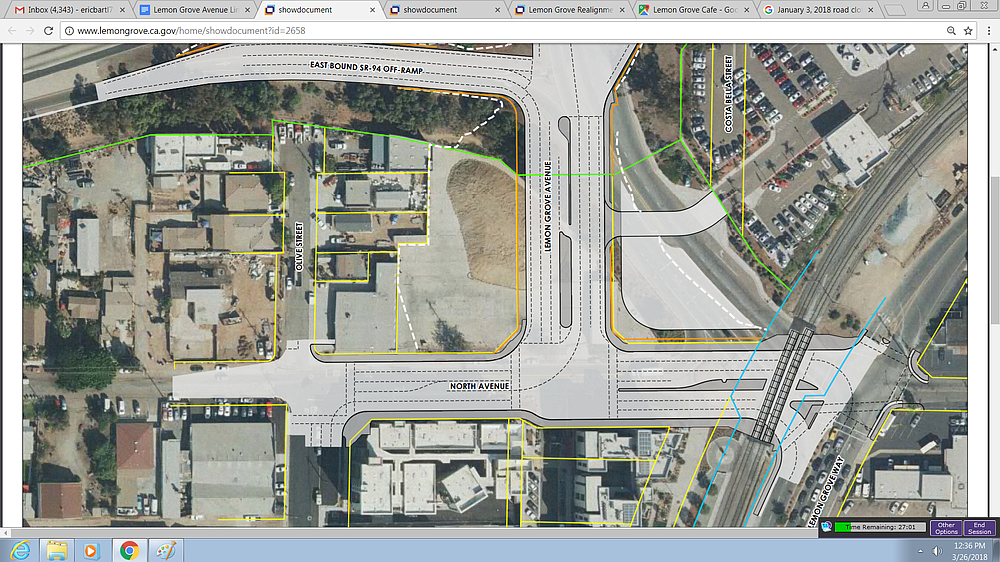 This closure and detours have caused traffic woes for drivers who live, work, or shop in the area. Google map directions are still directing people through the closed stretch of road and not everyone catches the detour signs.

A manager from Lemon Grove Cafe, which sits across Lemon Grove Ave. from the road closure, just south of 94 and east of the trolley line, said she has had customers coming from west of the trolley crossing complain about the difficulty they had reaching the restaurant.

Mossy Honda lies next to the construction area, on Lemon Grove Ave. west of the trolley line. There is a way to reach their location, but drivers coming from the east of the crossing run into the closure and give up rather than turning around and following the detour signs.

Sales manager Talha Mahmood said the road closure has affected business “big time.” He said, “We have seen a 20-30 percent reduction in business since the road was closed, especially from local customers.” Customers exiting 94 haven’t had as much trouble since Honda sits on the same side of the road closure as the exit/entrance ramps.

What has been one business’ loss has been another’s gain. Traffic headed toward 94 is directed to detour west on Broadway Lane, then north on Buena Vista Avenue. It would then go east on North Ave. and north on the newly realigned Lemon Grove Avenue. Traffic exiting 94 also funnels through Buena Vista, which only has one lane in each direction.

Jose works at BV Tires on Buena Vista, half a block north of Broadway, across the street from Home Depot. He said the extra traffic has been good for their business but not for his commute. Over the past year he has had detours he has had to go through to get on 94 on his way home from work.

Chris from BV Tires said he has seen three car collisions in front of their shop in the last month. He described one of the collisions: “One car turned left from Home Depot. Another car heading to the highway clipped him. He rolled a few times. There used to be a sign on the corner that said ‘Buena Vista and North Ave.’ He took it.”

The project includes new entrance and exit ramps to 94, new underground sewer and water lines, an improved stormwater drain system, and improved traffic signal efficiency. New pedestrian ramps and traffic signals have been added at the intersection of Broadway and Olive. Crews are working on getting the traffic signals functional there.

Mike James, assistant city manager for Lemon Grove, told the city council, “we are at the very tail end of this project.” Over the phone he said he hopes the project will be completed and the road reopened by May. He said this is the largest project the city of Lemon Grove has ever undertaken and explained that the project delays were due to “inclement weather and complications from coordinating multiple utilities in a very small footprint.”

Heavy rain impacted the grading phase of construction. A concrete encasing was unexpectedly found surrounding the old sewer main and a “jack and bore” job had to be modified to include hand tunneling with jackhammers. A pipe that was listed in city records as being made of clay was found to be made of cast iron. Other public agencies made changes and requests after the original project plans were set in place, causing further delays on construction as new plans were made.

Councilman Jerry Jones spoke about the project at the city council meeting. He called it an “extremely complex project” and said that construction projects all over the county are six to eight months behind schedule.

“I'm as frustrated as anyone else, believe me...but in the end when it’s done there is going to be such an improvement in the traffic flow."'

google maps also says the Lemon Grove public library is permanently closed. It is very open. They say they have been trying for five months to get Google to remove that notice.