Matthew Philbin — landlord to the homeless

Rent control without being told to do so 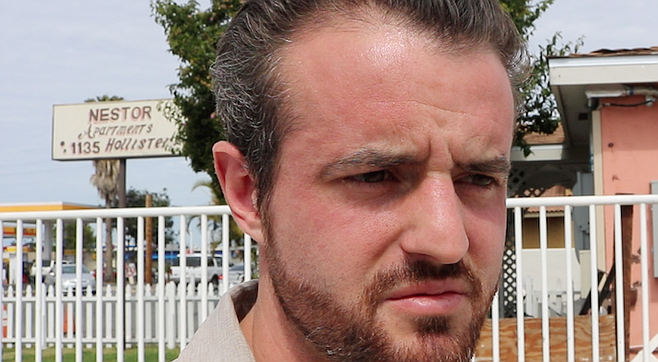 Matthew Philbin just turned 30 years old on March 18. He celebrated his birthday by hopping into his lifted Dodge Ram truck and picking up one of his new tenants.

“I pick them up with their backpack, suitcase, duffle bag, shopping cart or whatever — drive them to their new apartment, and I give them their keys.”

Philbin, a South Crest resident near National Avenue, owns 86 apartment and residential care units. He’s rented out half of his units to former homeless San Diegans.

“They are people with housing vouchers from non-profit or government programs,” he said, “so I do get paid.”

Philbin purchased a property on 2nd Street in National City with 15 units. One of the tenants that moved in was a widow who had been living in a tent since losing her husband. The other was a homeless man who began taking classes at City College.

In 2014, Philbin "was the at-fault driver in a minor car accident which was ultimately dismissed by the judge.”

The sports news reporters had a field day with the incident, because Philbin’s father, Joe, was the head coach of the Miami Dolphins at the time. He was the offensive coordinator for the Green Bay Packers when they won the Superbowl XLV in 2011.

In February 2016, Matthew Philbin got married; the following October he was discharged from the Army; two weeks later, he and his wife moved to San Diego.

He bought his first property at Grant Hill which had 11 apartments — with the backing from his parents. Then in May 2017, according to the Zillow website, he sold a house in Vista for more than $1 million. With his commission, he paid back some of the loans that he borrowed from his family and friends.

Last summer, Philbin bought a property in Lemon Grove for around $750,000. The project is called the Crestline Manor, on Crestline Drive. “I’ve been trying to get the permit approved for the remodel since last summer,” he said.

Dolph Gutzman, 65, is one of Philbin’s tenants that utilizes a walker. He’s an Army veteran that was homeless for 12 years prior to moving into the Nestor Apartments in January. “My rent is $1384 and HUD (Housing and Urban Development) is paying approximately $1000 of it.”

The complex is located on Hollister Street two blocks west of I-5. It has 13 apartments and it appears to be an older motel that sits behind the Motel 6 which is in front of the I-5 entrance on Coronado Avenue.

Philbin purchased the property in January for $1.9 million and has spent another $150,000 on renovations, which include updated kitchens and bathrooms, paint, floors and a $75,000 solar powered electrical system.

Gutzman sometimes misses his old lifestyle of sleeping on the sidewalks in East Village. “It’s too confining inside and there are times I want to come out here and roll out my blankets,” he said.

“If someone breaks even or loses money for the purpose of helping out the most down-trodden people,” said, Rafael Bautista. “I am sure that they will be repaid in immaterial ways.”

Bautista is a is a real estate and mortgage broker who advocates for rent control in San Diego.

“Matt seems to be putting rent control in effect without being told to,” Bautista said.

I appreciate The Reader covering stories of good news such as this.

Although he is no longer hidden, Mr. Philbin is truly one of the righteous.

A property owner in Lemon Grove has been given 90 days to turn what the city says is a 22-bedroom board house back into a five-bedroom home.

At a public hearing Sept. 6, the City Council agreed with staff that the 2,900-square-feet home on Crestline Drive is in a single-family residential area and not permitted to be used as a boarding facility.

The owner of the home, Tim Hutchison of City Redevelopment Property Investments, provides housing and meals for 14 residents. Many of them are physically or mentally challenged, he said, but still able to live independently.

Nearly two dozen Lemon Grove residents at the meeting voiced their concerns about the safety of the neighborhood. Many said they believe that residents of the facility have caused property damage to their homes, stolen items from their automobiles, and physically or emotionally intimidated them and their families.

Matthew Conery, who lives nearby, said he has seen drug deals out of the home and he worries about the influence that will have on his high school-age children.

“The whole neighborhood is supposed to be family based,” Conery said. “This is not family. I’ve got them coming down in my driveway, looking into my back yard.”

A staff report said that the current use of the property at 2545 Crestline Drive negatively affects “the public health, safety, peace, comfort and general welfare of the character” of the residential neighborhood.

The city reports excessive calls for service at the property within the last year. Heartland Fire & Rescue has been called to the house 48 times; the Sheriff’s Department has had 87 calls.

Lemon Grove city officials also found code violations at the property starting in 2015. The city warned Hutchison about construction that had not been permitted by the city. Those include an illegal garage conversion into bedrooms and 17 new bedrooms the city said were added since Hutchison bought the house in 2014.

The city has fined Hutchison upward of $14,000 for the construction violations but has not collected. Hutchison said he has been working with the city for a year to straighten it out.

He said the garage had been converted into extra living space before he bought it, and now it is only used as storage area.

Hutchison said the people who live in the home are “down on their luck” and struggle with physical and mental challenges. He said most of them cannot afford the $595 to $795 monthly rent he charges and because they are vulnerable, he does not go after those who owe him money.

He said he didn’t consider the dwelling a “boarding house” but a family home. Those living there help with chores. He provides food for breakfast and dinner for the residents. He likened the home to an independent living facility that provides affordable housing and takes people off the streets.

The city calls the home a boarding house by definition: one in which lodging is provided for compensation and meals are provided on-site.

Hutchison disputed the neighbors’ claims, particularly about stolen property. He said there is a house next door to his property that also has residents who live in a group setting, and there is a “troubled kids house” down the street.

He said he has seen people walking up and down the street at all hours of the day and night that are not residents of his home. Any of those, he said, could have been responsible for the neighbors’ complaints.

Mayor Mary Sessom said the city was not trying to make him close the house down immediately, but she said it needed to be returned the five-bedroom dwelling it was permitted to be.

Hutchison said he wasn’t sure what would become of the residents who live in the home now, but that he would do his best to make sure they did not end up back out on the street.

HUD section 8 housing is a guaranteed income for landlords. The government nee taxpayer picks up the difference between what the HUD qualified participant pays and the market price of the apartment. While Mr. Philbin is doing what he can to help (qualified) homeless get off the street he is also getting paid by the taxpayer. HUD units have 100% occupancy rates and guaranteed income with waiting lists for five years out.