To fight strippers, no one gets to dance 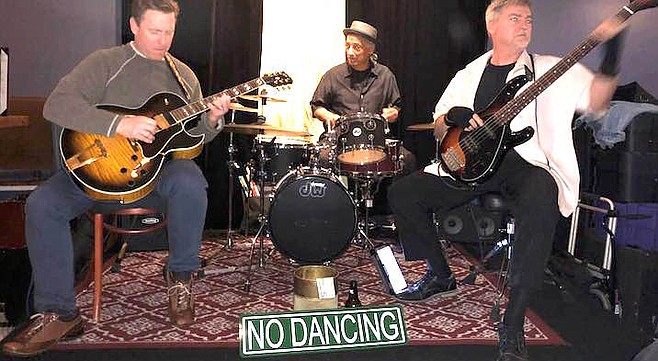 In most restaurants in the city of Encinitas, when live music is offered, dancing is not allowed.

After finally paying off a $3,000 fine a few weeks ago, levied in September by the California Alcohol Beverage Control board, Mr. Peabody’s co-owner, Brie Cardosa, now realizes why her club was the subject of a four-month undercover investigation.

Unlike the growing hipster scene of the numerous restaurants and bars along Encinitas’ Coast Highway 101, Mr. Peabody’s has been in the same location for 17 years. Located next to I-5 in the newly remodeled Lazy Acres shopping center, the popular establishment offers live music five nights a week.

Because of complaints over the Coast Highway downtown restaurants and bars, the city asked for help from the ABC in enforcing regulations. Peabody’s got caught up in the increased enforcement, even though the club is blocks away from the Coast Highway scene.

“I understand they have a job to do,” said Brie of the ABC agents. She even thinks her enforcement action was “fair”, as in a cost of doing business, but added, “We didn't understand the extent of the regulations. We don't want to get in trouble if our customers dance, but don't want to be a dance club."

“We’re really pretty strict about who we let in, and who we serve,” said Mr. Peabody’s co-owner, and father to Brie, Bobby Cardosa.

Mr. Peabody’s was fined for “allowing” dancing. “We were told it could even include a group of people standing, swaying to the music,” said Brie. Under their current license, regulations don’t allow for more than four musicians on stage. “It ended our Jam Nights; Blues Jam, Jazz Jam, all our Jams had to be canceled,” said Brie.

Now that the fine is paid, the club may apply to the city for an “entertainment establishment permit,” commonly known in the business as a “cabaret license” — a name given back in the prohibition era.

Mr. Peabody’s application, if approved, would bring Mr. Peabody’s into compliance with their customers who feel the beat, and want to get up off their feet.

Brie showed me her file folder containing the lengthy application they are about to submit, which will need to be approved by the Sheriff’s Dept. and the city. But the Cardosas are holding off for just a bit.

As of March 20, the club has collected over 500 signatures on their in-store petition. “These are real people with real addresses,” said Brie.

On February 27, Brie lunched an online petition, which has gathered 1,463 electronic signatures; the first 1,000 in less than 48 hours.

Similar permits are required in most California cities and counties for eating establishments offering entertainment, including San Marcos and Carlsbad, Pappi Grande and his three-piece band, Blown Fuse, played at the San Elijo Hills wine and foodie bar, Café Stoked, “If people got up and danced, I thought I might go to jail for playing my music,” he said.

The San Marcos city manager’s office indicated that of course, their city wants to support the establishments that offer entertainment. But real reason for the No Dancing clause?

“It seems to be the only way we can legally keep out strip clubs,” said a City of San Marcos official. The adult industry’s lawyers have seemingly been able to successfully challenge every other restriction to nude dancing around California. However the blanket No Dancing ordnances for restaurants and small bars is the only one that seems to work by opening up applications for adult entertainment to greater public review and scrutiny.

We need you Kevin Bacon, you're our only hope.