The Grateful Dead get the evil beard treatment

Roots of Creation's Grateful Dub gets a live show, plus Violent Femmes, Poptone, and more 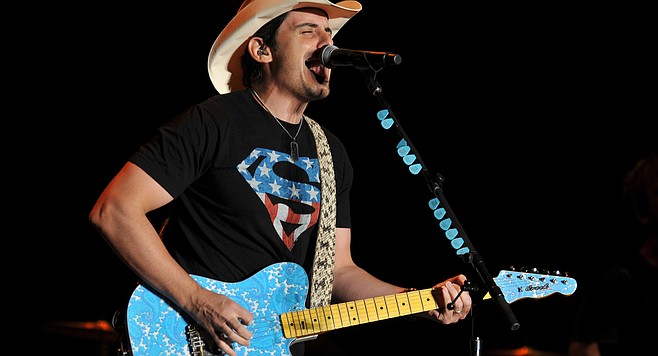 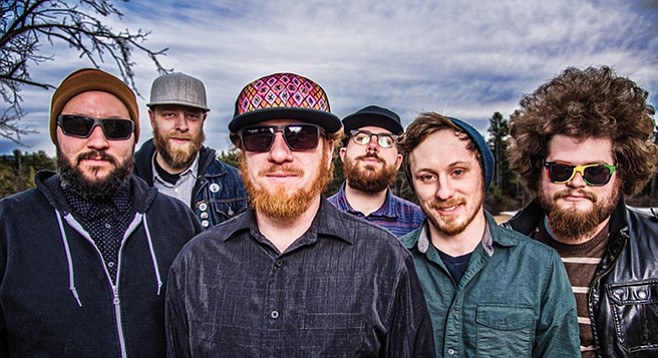 Psychedelia and reggae: they usually go together as seamlessly and happily as rhythm goes with blues, as Clapton goes with Cream, as A Day at the Races goes with A Night at the Opera. So it comes as no surprise that the new album from Roots of Creation, Grateful Dub, is being pitched as a reggae tribute to the Grateful Dead that blends the best of two mellow worlds. However, most of the covers contained therein are so reimagined as to be almost unrecognizable until well into each track, failing to invoke the Dead so much as what the Dead probably sounds like in Star Trek’s “evil beard” universe, where everything is uniformly opposite from the known and expected. The album’s lead single, “Ripple,” does feature a familiar face and sound with Jerry Garcia Band player Melvin Seals (also a guest on ROC’s previous album), who provides a mellow acoustic partner to the less expected slinky sax and harmonica runs, while a second single, “Casey Jones,” gets its pounding groove from guest vocalist Dan Kelly of Fortunate Youth. Grateful Dub dropped earlier this month, and the band will be playing it live on tour for the first time at Winstons on April 27. The bill includes Orlando, Florida reggae rockers Kash’d Out, currently signed to the label run by local band Pepper, Law Records, which just released a video for Kash’d Out’s new single “One + Off.” Also opening will be Boston dub rockers the Elovaters, fresh off recording a new album with Giant Panda Guerilla Dub Squad producer Danny Kalb. 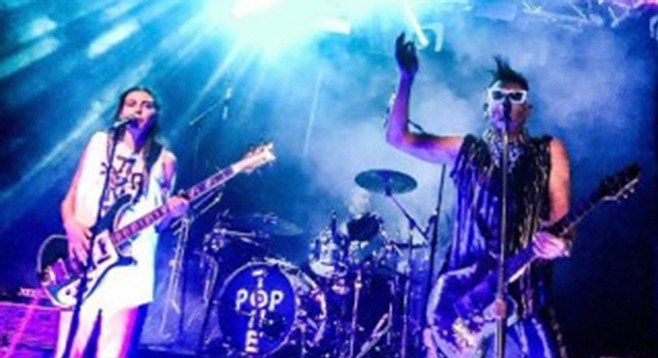 Poptone: Ash and Haskins, at it again.

Looking back at all the various Bauhaus spinoff bands that came and went whenever the prototypal goth rockers were uninterested in being Bauhaus, the first that comes to mind is Love and Rockets, who briefly proved to be far more the hit machine with cuts like their 1989 top-ten single “So Alive.” Tones on Tail may have been a less known Bauhaus splinter group, but they were no less beloved by aficionados, and their vintage track “Go!” has such legs that it still turns up in films like the Power Rangers reboot. Then there was the Bubblemen, also wildly different sounding from Bauhaus, with the one thing uniting all four bands being the duo of Daniel Ash and Kevin Haskins. The pair teamed up again last year to create a new group, Poptone, rounded up by Haskins’ daughter, bassist Dive Dompé, and so far they’ve been performing new arrangements of old tracks from all their previous projects, as immortalized on a live album released last December featuring songs recorded on their first concert tour and live in the studio. The tracklist is probably akin to what you can expect when they play the Belly Up on May 10, including the aforementioned “Go!” as well as “Lions,” “Christian Says,” and “Twist” (all Tones on Tail), “An American Dream,” “Love Me,” and “Mirror People” (Love and Rockets), and the Bauhaus classic “Slice of Life.” You might also be treated to covers they’ve been known to whip out in concert, like Elvis Presley’s “Heartbreak Hotel” and Adam Ant’s “Physical.” 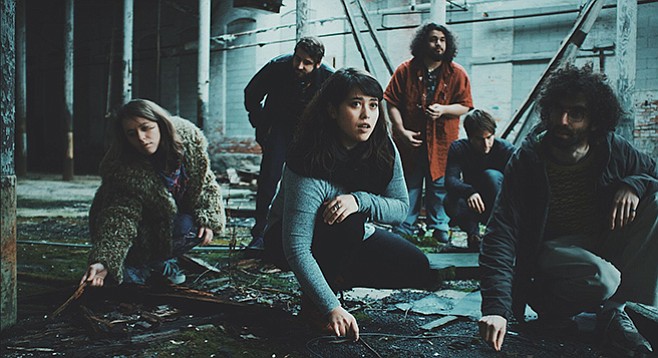 Bent Knee’s fourth album, Land Animal, was lauded on a number of higher profile tastemaker websites and blogs last year, most of them citing comparisons to acts like the Mars Volta and Porcupine Tree, but few write-ups seem to acknowledge the almost vaudevillian and burlesque feel of their dark and cinematic sound. Sure, they do female fronted prog with many of the expected trappings you’d find everywhere from vintage Renaissance to recent Lana del Rey, but there’s a cheeky humor and lilting giggle to the both the lyrics and vocal presentation, gracing the new album tracks with enough nudges, winks, and naughty nods to make one wonder if this isn’t actually a spoof of theatrical rock. Singer Courtney Swain’s multi-octave range has been compared to both Kate Bush and Adele, but I detect more than a little Nina Hagen and Lene Lovich among her more prominent influences, with occasional hiccups, squeaks, and growls that occasionally cause the band to sound for all the world like Marillion as if fronted by Bjork. When they take the Soda Bar stage on June 21, the show will be opened by New Jersey post hardcore band Gatherers, whose new single, “The Floorboards Are Breathing,” was inspired by the 2007 documentary film One Minute to Nine, chronicling the final days before Wendy Maldonado began serving a prison sentence for killing her abusive husband. The song previews their upcoming full-length, We Are Alive Beyond Repair, due in June via Equal Vision Records. 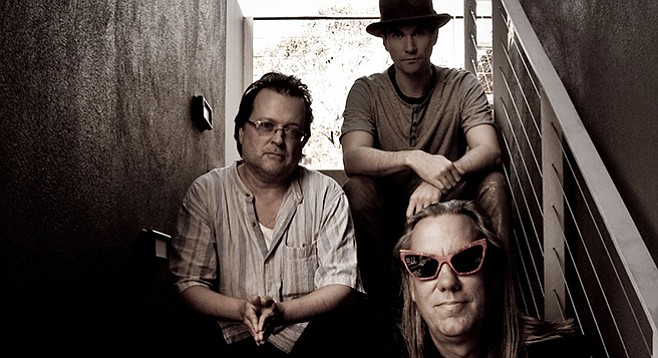 The Violent Femmes — at war no more

Legendary Milwaukee folk-punk rockers the Violent Femmes continue to tour in support of last year’s 2 Mics & the Truth: Unplugged & Unhinged in America, a collection of on-location live recordings from their 2016 media tour of radio stations and podcasts promoting their first full studio album in 16 years. Founding duo Gordon Gano and Brian Ritchie will bring the current version of the trio, which has included drummer/singer John Sparrow for around two years now, to Humphreys by the Bay on June 25. That the band is even still extant is remarkable when one considers that it’s only been around a decade since Gano and Ritchie were at each other’s throats and suing one another, mainly stemming from a dispute over their most well-known song, “Blister in the Sun,” being used in a Wendy’s burger commercial. They didn’t bury the hatchet until reuniting for Coachella in 2013, which led to other festival appearances, and then the new studio recordings, subsequent live follow-up album, worldwide road trips, and now another tour bringing them back to San Diego for the fifth time in three years. 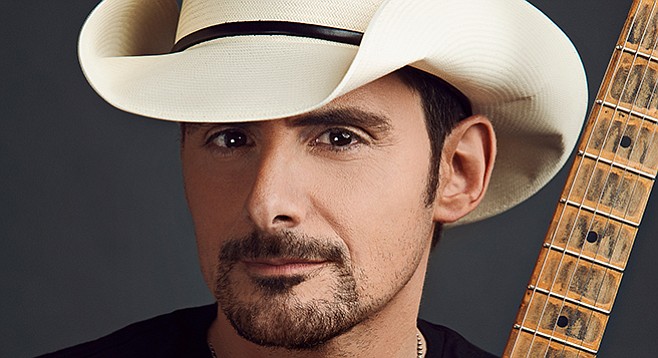 Country music A-lister Brad Paisley will be in town July 20 to play Mattress Firm Amphitheatre, which also just announced upcoming shows by Dirty Heads (opening their tour in Chula Vista on May 18) with Iration and Logic with NF (July 24). None of these acts need attention or ink to sell tickets, but the title song from Paisley’s 2017 album, Love and War, was co-written by CCR legend John Fogerty, who also performed on the track, which qualifies as cool ‘nuff to get Paisley a mention here, where we endeavor to keep you posted on the widest — and wisest — array of upcoming acts heading for the lower left coast. One big selling point in Paisley’s favor is his opening act, bluegrass singer and multi-instrumentalist Dan Tyminski (Alison Krauss & Union Station), whose mildly epic Southern Gothic album reached number 23 on the U.S. Country chart last year.