Scripps pedestrians in a hurry avoid the bridge 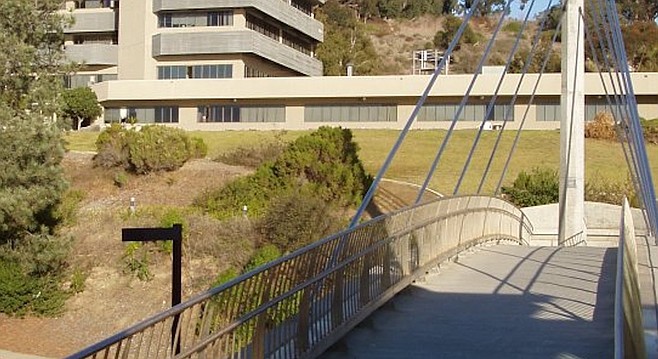 When a Scripps Institution of Oceanography affiliate was hit and injured while crossing La Jolla Shores Drive at Downwind Way in October 2017, staff, faculty, and students had been voicing the need for improvements to the crossing. Now the intersection is getting attention, after UC San Diego hired consultant group Chen Ryan to produce a traffic study to convince the city, to rectify the situation.

Scripps Crossing, the pedestrian bridge installed in 1993, is a safer alternative to dashing across fast-moving downhill and turning traffic at street level, but to reach the bridge, one must walk uphill to the northern end of campus and then climb several dozen stairs (or take a very slow elevator).

Phase one of the improvement project was completed in December 2017, including concrete resurfacing of Shellback Way and Downwind Way. The crosswalk was moved from south of Downwind to north, and new signage and striping were added. Rectangular Rapid Flash Beacons, which are pedestrian activated flashing lights, were installed on the crosswalk. Phase two, expected in Spring-Summer 2018, will bring sidewalks to the north side of Downwind, which it currently lacks, and repaving of an uneven part of the street near the corner with La Jolla Shores. Pedestrian ramps will be added to the crosswalks on Downwind and Shellback.

Gallagher said the city is spending $1 million for the improvements.

Why is it that City traffic engineers seem to act only after there are pedestrian accidents or fatalities?

It's been that way for years, and it won't change.

Maybe we need a pro-active Mayor and City Council that operate on behalf of the people of San Diego. Ditto for School Board where two of five incumbents are running for re-election unopposed.