San Diego shows to get this sellout off his couch 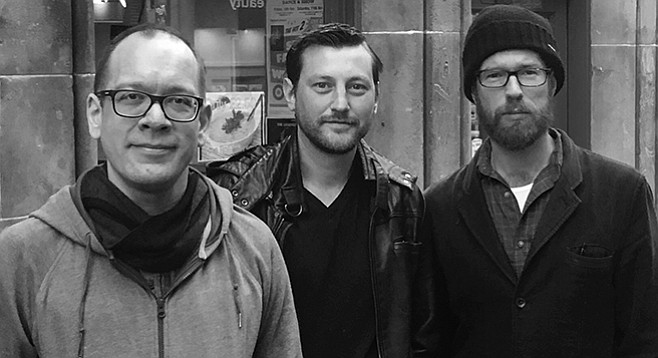 Last month, a local Facebook friend posted: “‘There’s no music/art scene in SD.’ Sure there is, but you are in your room missing it.” Easy for him to say, I thought. He’s the promoter of a particularly interesting hardware-based acid techno monthly (Acid Varsity), which has generated the closest thing to an underground scene as you’ll find without a spelunking helmet. But he was right. There’s little shortage of good reasons to get out on a weekend, or even weeknight, provided you’re able to forego bongloads and Black Mirror long enough to, you know, talk to people.

My bandmate Brandon recently said it best while we were waxing wistful about San Diego circa the early 2000s: “I can’t tell if San Diego ever stopped being cool or if I just started getting older.” Hell, I’m missing the Thurston Moore Group at the Casbah right now just to stay home and meet an extended deadline. Early 2000s me is shaming 2018 me as a sellout. But that just goes to show that there’s something fundamentally adolescent and quixotic about the idea of a scene in the first place, as if it were a cohesive movement affirmed by midnight high fives, blasé name drops, and self-referential dating circles. You know, early 2000s stuff. So, without further ado, here are a handful of things about, from, and coming to San Diego that will get fat, old, sellout me off the couch.

One of San Diego’s finest storytellers hasn’t lived in San Diego for over a decade, but he can tell you all about going out in the early 2000s. Adam Gnade recounted a raucous Golden Hill house party in his 2016 novella Locust House, which over-the-hill farts like me get pretty back-in-my-day about. His latest dispatch — Voicemails from the Great Satan, released in February via San Diego’s own Three One G Records on hot pink cassette tape — follows Locust House punk rock protagonista Agnes McCanty as she flees civilization in a van after the presidential inauguration.

One senses Gnade projecting more than a shadow of himself onto the character as she navigates Trump-era America in a string of bleak narrations that have come to characterize Gnade’s “talking songs.” Gnade recorded his downcast passages in Logan Heights while in town to present at the San Diego Zine Fest last October. The story skulks over devastating, neverended end-of-the-world ambient guitar textures by Demetrius Antuña, reminiscent of his work with apocalyptic post-rock projects KATA, ANA, Ilya, and current darkwave endeavor Warsaw. Gnade is fresh off a U.K. tour and will be announcing West Coast dates shortly.

Assembled as a side project from members of the Magic Band (of Captain Beefheart notoriety) while touring Australia in 2014, the Android Trio features CalArts alumni Andy Niven on drums, Eric Klerks on bass and 8-string guitar, and guitarist Max Kutner from the felloe former Frank Zappa players in Grandmothers of Invention.

The Magic Band was reunited (and later reinvented with new members) by original drummer John “Drumbo” French in 2003, sans frontman, as a matter of both nostalgia and necessity. French said in a podcast interview last year, “Because my experience was on Mars, where am I gonna get a job on Earth?”

The Magic Band’s jilted rhythms — which he transcribed from melodies transmitted from Beefheart via cacophonous piano lines and fragments whistled over late-night phone calls — were all he knew (apart from a few oddball projects that, while compelling, never garnered comparable traction). The songs also never got a chance to stand on their own outside of Beefheart’s tyrannical rule, which usurped credit and royalties from compositions that several bandmates have since insisted were their own co-creations.

Maybe nostalgia’s not the right word. The genesis of the Magic Band’s now-revered albums such as Trout Mask Replica and Lick My Decals Off, Baby was a saga of physical and emotional abuse that was so extensive it takes up the bulk of French’s 880-page book, Beefheart: Through the Eyes of Magic. Yet, like a victim returning to the scene of the crime, French has transitioned from behind the traps to in front of the mic, where he offers a formidable impersonation of his gravel-throated tormentor while the virtuosic young musicians who now comprise the Android Trio and keyboardist Jonathan Sindelman lurch through hits such as “Floppy Boot Stomp,” “Bat Chain Puller,” and “Electricity.”

Perhaps it’s adumbrations of the tremendous, singular ego that was Captain Beefheart (aka Don Van Vliet, who passed away in 2010), but the band’s 2017 tour took them exclusively abroad due to a resounding lack of interest from stateside promoters. The new Magic Band seems to have the same problem as the old Magic Band; it doesn’t make any money. Barring the hyper-accelerated evolution of popular opinion, we probably won’t be seeing the Magic Band in San Diego anytime soon. But the Android Trio’s meandering, inquisitive jazzscapes are the next best thing. And, as the great Captain once growled, “If you got ears, you gotta listen!” Fistfights With Wolves and INUS round out the bill.

Get your bad self over to Liberty Station on March 31 for a post-reverent Stay Strange showcase in collaboration with NTC Foundation titled Hand of God: Conceptualizing Spirituality Through Experimental Music. The free event will be held in the Historic North Chapel and kicks off at 6 p.m. with an opening prayer from Ædwyrrde Lancsaubre followed by Monochromacy, Tatsuya Nakatani, and Bill Orcutt, interspersed with a crowd-sourced confessional sung by Meghann Welsh over doom tubist Codex Confiteor (Jonathon Piper, formerly of Aquapuke) and tarot readings by Fátima Courroux in the sanctuary.

And finally, boisterous garage pop duo Gloomsday will be releasing a new EP, Anxiety, Disbelief, Wonder, at a free Whistle Stop show on April 27 with Exasperation and Miss New Buddha.

“The songs on the EP feel more relaxed and they have more sonic space to them,” says drummer Lori Sokolowski (Rosalyns, Polish). “It’s a chiller, more grown-up Gloomsday.”

See, even us big kids still have fun every once in a while. What’s your excuse?

What a thing! Here I am, researching Post-Modern literature and Frank Zappa when I come upon a well written article...and the style looks familiar...and then I see the author's name! Hey Chad, it's Kaylee from Humboldt. Your writing is beautiful; all adjectives and elbows! Very fun. You know Beefheart lived up in Trinidad right? What a strange thing to come upon you and your work and to find that you have made a living as a writer! I'm a total sell-out: I'm a Professor of literature out in Las Vegas. If you ever some out to Vegas, please hit me up; I've no social media. But I'm at [email protected] Good to find your writing online. Peace.