Bands deserve what they can earn 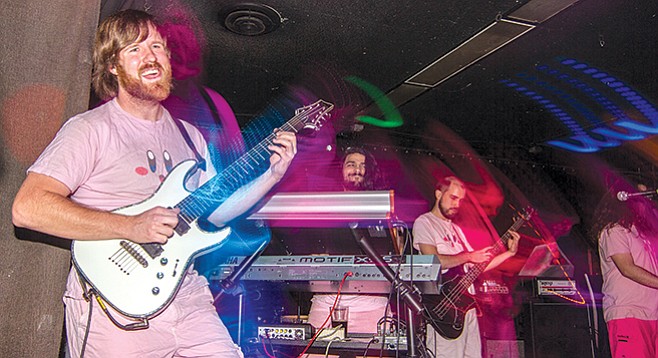 Everybody loves a great underdog story, even when it comes to live music venues. Instead of focusing on some of the bigger players (Belly Up/Observatory/Casbah/HOB), let’s zero in on some of the smaller venues that continue to showcase bands and run successful operations. This is especially relevant in an era when bars are increasingly abandoning live bands in favor of DJs. Here’s what three insiders helping to keep the local, live music flame burning strong had to say.

Space has taken over a location on El Cajon Boulevard that is known for both live music, and heavy turnover. Within the past ten years, the establishment has existed as the Radio Room, Bar Eleven, the Void, and the Hideout. Space is angling to be the bar that the Che Café crowd hits once they are old enough to drink. They are courting the punks and oddballs, and offer a unique ambience for their shows. Performances are often complemented by video (primarily sci-fi and horror films) projected behind them.

Andy Arredondo, manager of Space, fielded questions about the venue.

What do you guys offer that sets you apart as a live venue?

“San Diego has cracked down on house shows, so it’s harder for bands to do DIY shows. We offer a killer sound system, a great stage and staff, and we give 100 percent of whatever comes through the door and presales to the bands. Obviously we make the bar sales, but everything that we make from the door is 100 percent to the live performers', which we thought is something that San Diego needed. Bands deserve to get what they earn.”

A lot of bars are switching away from featuring bands, and instead focusing on DJs. Have you considered making this switch as well?

“We like sticking to anything that’s a live performance. We don’t go for the booty-basement crowd or nightclub status. We try to focus more on guys like Prince Paul, the producer that used to work with De La Soul. We had him come through here, and we accept acts like that, because he’s pretty legendary and he’ll actually put on a show. That is what we would rather have. We do have plenty of DJs that come here and play a little bit of music at night. We give them a place, because a lot of venues don’t want to offer a night to these people that aren’t necessarily bringing the biggest crowds. A lot of these people are just looking for a place to play. They’re not asking for anything, they just want somewhere where they can play their music and enjoy it.”

What is up with videos projected onto the stage?

“The concept of Space kind of falls into that. The idea is to keep a sci-fi/horror theme going constantly — especially when bands are playing. We set-up a projector, and we just thought it would be something extra for the crowd to see. Something that would draw their attention. We’ll play Alien, or 2001: A Space Odyssey…those types of sci-fi/horror films or just weird movies. We just wanted something that people would be like ‘that’s pretty interesting.’”

Do you match bands with the videos?

“Absolutely. Last night, we put on that Tupac film, Juice. We had hip-hop DJs, and we were looping the scene when they were going back and forth in the club when the DJs were scratching records. It kind of just fit perfectly.”

Located on the eastern end of Hillcrest, the Merrow has hosted live music for close to five years now. Live bands are rare in Hillcrest, so the Merrow is an outlier in their neighborhood. Over 90 percent of the bands that play at the venue are local, even though the bar is known for hosting the occasional national act. The Merrow can also transform its parking lot into an expanded outdoor drinking space on special occasions four times a year. I asked owner Paul Smith how many nights feature live music.

“We do four or five nights a week. Most of what we do is live bands, and then we have some club nights, or DJs once or twice a week. Mondays we have an off-night right now. We’re not really programming it too much.”

Are weekend draws always better than weeknights for bands?

“No. I’ve actually seen it where my weeknights will have better draws than my weekends. I think the customers and guests have so many other things they could be doing. It really just comes down to the band, and what their draw is in general. I’ve seen where a band did really well on a Wednesday or Thursday. So I put them on a Saturday night and they don’t do half as well.”

Is it a relief to not have to compete for national acts with other venues?

“I enjoy working with both the Soda Bar and the Casbah when they’re able to send us over shows. They’ve been around so long that they’ve got all the real good contacts. If it’s a Casbah show or Soda Bar show it definitely adds a lot of clout to the bill. There’s a level of competition, but, at the same time, I don’t view it that way. I feel like I’m in a slightly different position. We’re not competing directly. We’ve got our local bands that are playing here. We’ve got our daytime crowd. We’ve got our neighborhood crowd and neighborhood events that we do. I look at it as whenever we can do something with those guys it’s more along the lines of let’s just help build the local scene to be a little better.”

I’ve apparently been mispronouncing the name of the bar for years…Merrow is pronounced mur-oh, not mare-oh.

“As long as you’re there drinking and enjoying the music, I don’t really care what you call it. I wanted to give it kind of an Irish feel, and it’s a Gaelic term. It’s actually gender-neutral. It means mermaid or merman. I thought that was kind of a fitting thing for the neighborhood as well. A little more androgyny there.”

The long-reigning king of the Ocean Beach live music scene, Winstons Beach Club has been hosting bands for 27 years now. Beginning in 1990, Bill Winston transformed a blues and biker bar into a popular hangout for a younger crowd that displayed a keen interest in reggae and jam bands. The club books 75 percent local acts, and countless San Diego bands have graced their stage — most-notably a 26-year run by the Grateful Dead tribute the Electric Waste Band.

Being a beach bar, how much of an uptick do you get with live shows during the summer months?

“Being a beach bar does bring more people to the community in the summer for sure, and we do get some overflow no doubt about it. Though we are a destination, when people have to pay a cover charge, summer or winter, we can have a sold out show if the band is hot. It helps a lot in the summertime in the afternoons when we can leave our window open and people hear that we have live music. It’s quite an inviting environment when the band is fun.”

From a booking standpoint, how tough is it to compete with the clubs around town that consistently book well-known national acts?

“From a booking standpoint, we are probably the smallest fish in town when it comes to booking nationals. So, at times, I book shows that could possibly be at the Belly Up and certainly at the Casbah when it comes to size.”

Winstons seems really clever with scheduling early evening entertainment such as trivia and comedy. Does the turnout for these help even out thin turnouts for live shows?

“Since we’re off the beaten path and truly only have a few things to offer, entertainment and cocktails, and we have zero food, we must come up with other gimmicks that make it worth being there in the daytime. I’ve had a long run with trivia and comedy for some happy hour events. We’ve also tried out other things like open mics, open jams, painting parties and tie-dye parties that all make for a much more successful afternoon — which seems to be a catalyst for people willing to come in at night. Nobody likes to be the first person to pay to come into a room, though people are always willing to pay to come into a party.”