No beef with this corndog

Bagby gives vegan beer fans something to chew on 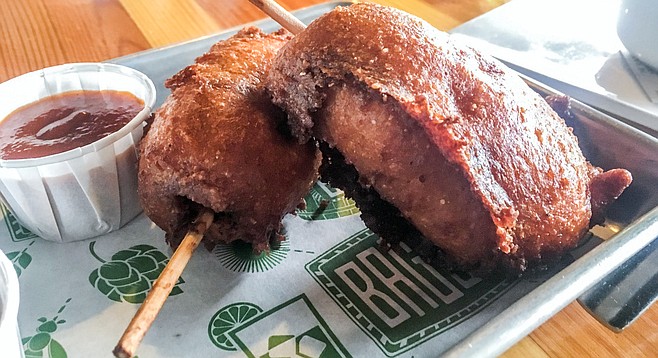 There are a dozens of good reasons to visit the Bagby Beer Company pub in downtown Oceanside, and most of them fit inside a pint glass. Yes, the gastro-brewpub launched by O.G. San Diego brewmaster Jeff Bagby is an automatic win for beer fans, but now it's out to lure a special subset: vegan beer fans.

As far as food is concerned, Bagby has been best known its burgers, pizzas, and crispy Belgian frites. While its menu has been fairly well rounded, it hasn't exactly been the stuff of vegan dreams — think braised short rib tacos, mussels in white wine butter sauce, and pork belly poutine. Even the salads are prone to include cheese or cream dressing.

As of this month, a little "plant based" icon turns up throughout the menu to highlight animal-free dishes. Those twice fried Belgian frites, sadly, do not seem to be included. Nor any of the desserts — yet.

But there are pizzas: The Slacktivitst, a pesto pie led by squash, asparagus, mushrooms, and Kalamata olives; and the Optimists, built around house made vegan Italian sausage. At brunch, soyrizo and scrambled tofu contribute to a veggie-rich breakfast. There's also the latest in vegan tech: the Impossible Burger. As I wrote about it recently, these very beeflike burger patties produce beeflike compounds with yeast. They are the expensive result of $250 million in venture capital, so the $16 price tag here is quite reasonable, and on par with all the pizzas.

I went for something a little more vegan surprising: sriracha corndogs.

The sriracha's in the cornmeal batter, which is generously applied to leave a good amount of spongy cornbread beneath its crispy fried crust. That batter is what makes the corndog a great option to veganize. The gritty cornmeal texture is ingrained in the corndog experience (no pun intended), so it masks most of the flavor and texture complaints that consistently dog faux frankfurters (pun intended). Personally, I almost prefer a vegan corndog to the real thing. Who needs all those nitrates?

However, it's the condiments that really made the dish work for me. A housemade mustard gave the right, sharp kick, but the smoked tomato-bourbon ketchup carried the day. The bourbon sweetness matches the corn very well, while the smoky tang complemented the dog. Pairing it with a crisp pilsner didn't hurt, either.