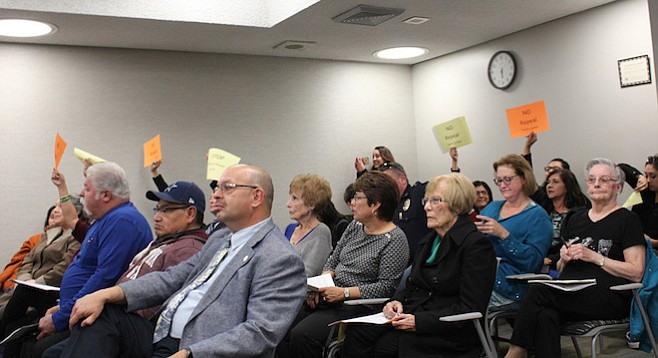 Two National City initiatives will face off in the June elections. Both received the necessary signatures to be placed on the ballot. Both are so similar, they may confuse voters.

The National City Citizens for Responsible Government wants to impose a limit of two consecutive four-year terms for mayor and city council members. If passed, the initiative will also hit the “reset” button on the terms of all current elected officials. That means Ron Morrison can run again even though his 12 years and three terms as mayor are up. If the initiative passes, Morrison could be elected to serve two more terms.

Notably, Morrison’s potential opponent, current councilwoman Alejandra Sotelo-Solis announced her candidacy for mayor at the end of February. She also voted to ban animal sales in pet stores of National City back in July 2016.

In an interview, Morrison defended the initiative. He said it brings National City in line with a majority of smaller cities that are now instituting term limits. He also explained, “It’s harder and harder to recruit people to do this job. I would love to have someone come in and take over. I would love for it, but it needs to be someone who has a business understanding. We’re dealing with a nine-figure budget here at this level.”

Outraged by what some see as a political power grab, another group of National City residents gathered enough signatures to place a competing initiative on the June ballot. The Citizens for Real Term Limits want to preserve the existing three consecutive terms for mayor. Morrison would not be able to run again. In addition, the measure would impose a limit of three terms for council members.

On Tuesday, March 6th, at a National City Council meeting, 20 public speakers came out to express their opinions on both initiatives. Many residents in the packed council chamber held up signs that said, “No Repeal Term Limits.”

José Rodriguez said, “We don’t need to spend $70,000 on a special election. This is a small city with a small budget. We could use that money for a lot of different things that our community needs.”

The city clerk, Mike Dalla, confirmed in emails that the projected cost for the two initiatives will be anywhere from $50,000 to $70,000.

Resident Rita Heiss said, “The argument that it’s going to cost money to be on the June ballot is just hogwash. It’s going to also cost in November.”

Eddie Perez complimented the mayor for doing a great job, but said, “Thank you and have a nice retirement because it’s time to move on.”

Council members then had to vote to place both initiatives on the ballot. City attorney Angil Morris-Jones first instructed, “The voters have signed the petition. Once you have been certified, you then have a duty to place this on the ballot. It’s not like you have the discretion. You’re performing a ministerial act that says you shall call for an election.”

The motion passed 4-1. The initiative that has the most votes in June will prevail.

Also, this statement is slightly inaccurate, as Measure B also applies term limits to the city clerk and city treasurer positions: "The National City Citizens for Responsible Government wants to impose a limit of two consecutive four-year terms for mayor and city council members."

Otherwise, good article. Thanks for your valuable coverage of local government.