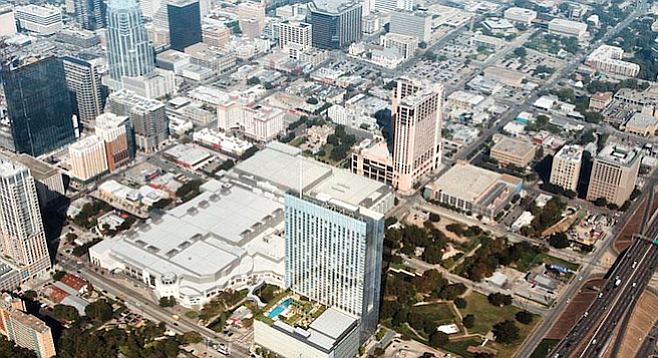 Beset by a Washington Post exposé of his questionable behavior as Union-Tribune publisher, his nomination to be president Donald Trump's Bahamian ambassador stalled in the Senate, and the downtown Navy Broadway complex continuing to languish unfinanced, what else could go wrong for mega-developer and Republican kingpin Doug Manchester?

Nothing less than sickening levels of potentially deadly carbon monoxide gas leaking from a malfunctioning pizza oven, per the Austin Statesman. The Texas newspaper reported that two people went to the hospital and dozens more were evacuated as a result of the February 21 gas leak, which "spewed carbon monoxide through several floors," of Manchester's yet-to-open Austin Fairmont hotel.

"First responders found high levels of the colorless, odorless gas through the first seven floors of the building, and evacuated everyone from those floors," said the account. "Division Chief Thayer Smith said firefighters ventilated the building to remove the remaining high levels of carbon monoxide."

Not to worry, the hotel insisted to the Statesman this week, the latest of a lengthy series of setbacks for the Texas convention hotel project won't cause yet another postponment of its grand opening, set for this month's South-by-Southwest music and tech fest.

"Our developer confirmed…that the source of the issue was identified quickly following the job site evacuation,” Fairmont managing director Tom Voss said in a written statement cited by the paper.

"They were able to safely resolve the matter. After extensive testing, we received notification that all readings were back to normal and that the job site is safe for staff to continue work as usual. There were no setbacks or delays to the final steps of construction and we are still on course to welcome our first guests in early March.”

The latest incident adds yet one more black mark to the dubious history of the Austin Fairmont, which took Manchester years to find the money for until Santa Monica billionaire and fellow Trump backer Thomas J. Barrack Jr. finally came to the rescue in October 2014.

Then followed a series of construction delays and disasters, per the skyscraperpage.com rumor site, whose opinionated denizens have been religiously tracking Manchester's progress, or lack thereof, for years.

"Grapevine has rumors of more delays. May not be ready till late Jan/Feb. Not sure what the hold up is, but could be the porte-cochere problem again. If you drive by there’s nothing in place and you can see the ragged attachment points where it ripped away from the curtain wall," said a post last November.

"I only overheard this being talked about, so not too sure, but it sounded pretty bad," said one commenter. "From what I heard, the water came from someplace high-up in the building and cascaded downward throughout the building."

Added another, "Belatedly confirming the leak rumors, at least according to the hospitality grapevine. Supposedly quite a lot of damage (one of my executive leaders estimated damages as 'several million dollars’ worth')."

The project has also been at the center of a vortex of legal claims and counterclaims lodged by feuding contractors, the Statesman has reported.

“What’s important for people to know is that Fairmont Austin remains on track to open in early August,” Manchester's son (also named Douglas) told the paper in March of last year.

“Delays that were incurred have been accounted for, and we’d be opening even earlier had they not happened. We look forward to delivering a stellar project in approximately five months.”

I bet Barrack is not too happy with the problems and delays. And "Papa" better not count on him bailing out the Navy Broadway project.

All this grief with that hotel may be Nature's way of telling ol' Doug it's time to hang it up and enjoy his remaining years. And while he's at it, he could abandon the project on the SD waterfront, and let some younger and more visionary up-and-comer have a crack at it.