In six states — this time as a Republican 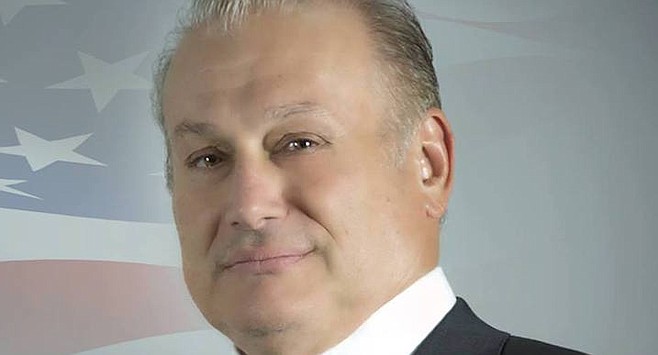 Roque “Rocky” De La Fuente, who has owned car dealerships and currency exchanges in San Diego County, and now concentrates on real estate, is running for the United States Senate in six states this year: Florida, Hawaii, Minnesota, Vermont, Washington, and Wyoming. He is running as a Republican, according to Ballotpedia. He was defeated in the California Senate race, getting 2.08 percent in the June 5 California Republican primary, according to Ballotpedia.

He ran for president in 2016 on the Reform Party ticket. He had been defeated in Democratic primaries in a number of states.

According to the Constitution, a senator must be a resident of the state they represent when they are elected. But state laws differ. In some states, a candidate may not have to move into a state until just before the election.

The problem is not that power corrupts, but that power is magnetic to the corruptable. (Vonnegut?)

CaptainObvious: I'm not sure the words "power corrupts" describe Rocky's situation. When he runs, he gets a small percentage of the vote. He will never get political power. I think some people get addicted to the thrill and ego boost of running for office. Mike Schaefer is another example. Harold Stassen and Gene McCarthy, who were both truly statesmen, even got the disease. Best, Don Bauder

Get yourself an appointment to a local state or federal board or commission if you want to serve..

concernedcitizen77: That's the point: I do not think he wants to serve. He wants the thrill of running. Best, Don Bauder

Mike Murphy: When I was going through school, teachers would instruct me, "If you can't say something nice about somebody, don't say anything at all." I have never followed that advice. It appears you haven't, either.

This reminds me of a Dylan Thomas line: "And serve me right, as the preachers warned."Best, Don Bauder

Murphyjunk: I once had an editor who described journalism and book authorship as follows: The writer is trying to get away with mischief. Like a nun, the editor hits his or her fingers with a ruler. Best, Don Bauder

Roque “Rocky” De La Fuente and Michael Schaefer birds of a feather and perennial losing candidates. Although, through some quirk in nature Schaefer somehow got elected to the San Diego City Council in 1965 and “served” one term. But then again wasn’t it Roque De La Fuente who won a substantial settlement in litigation against the City for its actions against his property in a Otay Mesa/San Ysidro Business Park?

If they are both “Loons” (birds of a feather) at least De La Fuente’s nest is well feathered. Schaefer, whose reputation as a not-so-nice landlord, which has been covered in the San Diego Reader, (https://www.sandiegoreader.com/news/1...) not so much.

JustWondering: De La Fuente got settlements by suing local governments. He tangled with the Federal Deposit Insurance Corporation which flayed his "personal dishonesty" and "shocking disregard for sound banking practices." That was appealed and modified somewhat. His intertwining of companies, some offshore, is a real mare's nest. Schaefer has gotten into trouble for being, in essence, a slumlord. He claims the charges were unfair. Best, Don Bauder

He is proof that you can't fix stupid. One day he will not even be a footnote in the dust bin of history.

AlexClarke: He could be a footnote in the history of San Diego, if it is long enough. Best, Don Bauder

Is that a Mona Lisa or Vladimir Putin smirk-smile on him?

shirleyberan: I dunno. I have seen the Mona Lisa but never seen Putin, except on TV and the papers. Best, Don Bauder