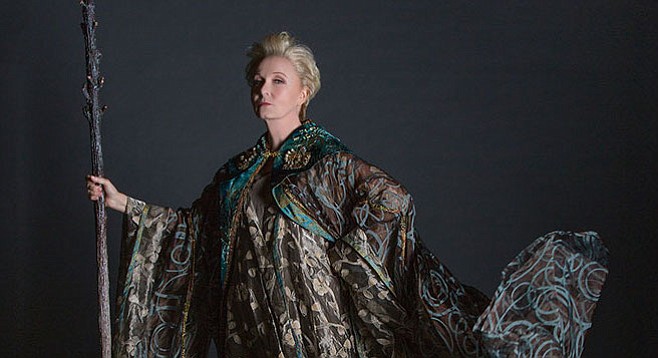 “That was a weird comedy,” he said, as we left the Old Globe after seeing The Tempest.

“Indeed,” I replied, “it’s not usually classified as a comedy anymore, but a romance.”

“Romance? The love story is by far not the most important thing happening.”

Yep. But the explanation is really cool, if you’ll hang with me.

In classical tragedy, the protagonist is a Somebody who is on top of the world as the play begins. Then he sins or makes a mistake, and from there it is an inexorable descent into misery, not just for the him, but for all those who depend upon him.

In classical comedy, lovers or would-be lovers must overcome obstacles and misunderstandings to achieve a harmonious marriage. Their private struggles have no larger public effect. The stakes are low.

Then came Shakespeare, who noted the categories and started to break them. He wrote comedies about people of importance: not servants and buffoons, but princes, princesses, dukes, and even a king. That raises comedy’s stakes, because marriages among great ones determine the future happiness and future heirs of whole peoples.

Shakespeare also tackled weighty themes in his comedies. He introduced issues of justice, usurpation, villainy, and racial, class, and religious bigotry. These plays are called the “dark comedies.”

Then he went a step further. His last few comedies recently have been dubbed “romances.”

“Romance” doesn’t mean “romcom” here, but a blending of comedy and tragedy. The term is from the Middle Ages, when comedy and tragedy were blended in the tales of knights, ladies, battles, quests, and courtesy. Think of the King Arthur legends: They are about people with worldly importance — and without it; about heroes who sin gravely — and villains who repent. Romances elevated the life of the pauper to that of the king, because a single soul was believed more precious than any kingdom.

Shakespeare’s romances do something similar. Unlike the knights’ tales, the Bard’s follow a specific form: They are tragedies interrupted by a change of heart. The Tempest is a revenge tragedy that should end in lots of death and despair. But Prospero — Prospera in the Globe's production — unexpectedly decides to forgive, for the sake of his daughter, who loves his enemy’s son. The decision results in life and hope. Everyone lives to witness the marriage, and the hoped-for birth of a new generation.

The Tempest plays at The Old Globe through July 22.